Taoiseach Leo Varadkar has branded the use of children with Down syndrome in posters for the referendum on the Eighth Amendment as "wrong".

Mr Varadkar criticised the posters, published by those campaigning for a No vote in the referendum on repealing or retaining the Eighth Amendment on 25 May, as he canvassed in Dublin today.

He said: "I think it's wrong because we have made it very clear in the proposed legislation that disability will not be grounds to end a pregnancy.

"I think it's one of a number of attempts by the No campaign to muddy the waters and create confusion."

The use of children with Down syndrome has also been criticised by Minister for Health Simon Harris, who joined Mr Varadkar as he walked through Dublin this morning along with Minister for Culture, Heritage and the Gaeltacht Josepha Madigan.

Mr Varadkar said: "When we amended our Constitution back in 1983 to outlaw abortion people thought that's what it would do, but it hasn't.

"In reality, nine or ten women every day travel to the United Kingdom to end their pregnancies and increasingly women are buying pills over the internet and taking them at home so that is actually quite a dangerous situation.

"We believe that we should face up to the reality of abortion and provide for it in our own country but with the necessary restrictions."

LoveBoth, which is seeking for the Eighth Amendment to be retained in the Constitution, has defended its use of children with Down syndrome in its latest poster and video campaign.

Spokesperson Cora Sherlock responded to questions over the use of children with Down syndrome in its campaign.

"There is a global trend towards abortion on the grounds of Down syndrome. That is a reality. I think there is something kind of presumptuous to think that Ireland would be any different", she said.

Alternative to constitutional amendment 'not workable'

Earlier, two former attorneys general and a former Supreme Court judge said the idea that "hard cases" can be dealt with by an alternative constitutional amendment or wording, to provide for instances of rape or incest for example, was not workable.

Speaking at a Together for Yes press conference this morning in favour of repeal of the Eighth Amendment, Michael McDowell SC, the former attorney general John Rogers and the former Supreme Court judge Catherine McGuinness said the constitutionally prescribed equalisation of rights has led to the courts deciding when women's lives and health are to be protected.

They said matters should properly be resolved by women in consultation with their doctors. All three have called on the public to vote Yes on 25 May.

Meanwhile, protesters on both sides of the referendum on the Eighth Amendment gathered outside the Dáil.

Pro-repeal campaigners tried to block graphic posters displayed by pro-retain groups, which are on extendable polls, from view through the use of sheets and flags.

Five repeal supporters dressed as angels were also at the gates of Leinster House. 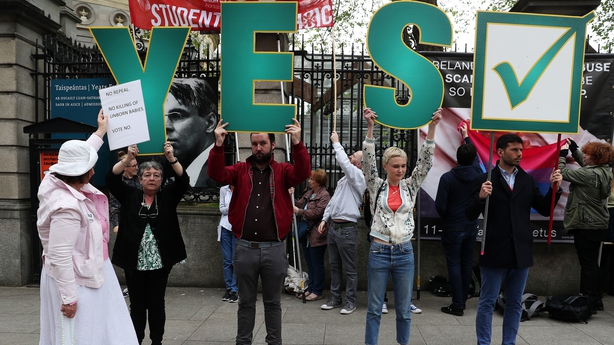