A circular sent out on behalf of the country's Education and Training Boards sums up one key challenge that is facing a number of second-level schools this week.

Offering advice to principals in advance of the TUI strike, it urges them to make "every effort to ensure the continuation of good working relationships ... in the aftermath".

Today’s strike is for just one day, but teachers will return to staff rooms and classrooms tomorrow and they will have to get along as normal and continue to work together.

Those ASTI teachers are obliged to be available to work as usual, but they have pledged - as is their right - not to do any work normally done by their TUI colleagues during the strike. 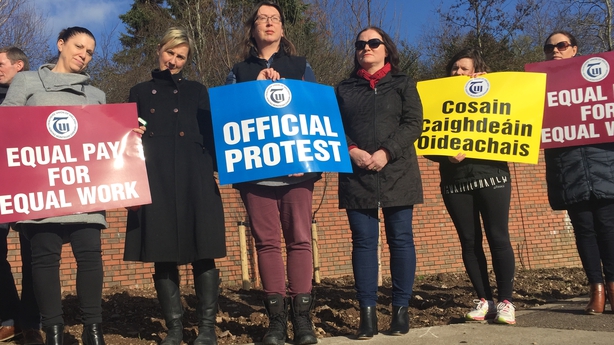 Many second-level schools contain both TUI and ASTI members, and it is these "dual union" schools that have been encountering difficulties.

Take the case of one large urban school, where 70% of teachers are members of the TUI, and most of the remainder belong to the ASTI.

The principal, who is an ASTI member, initially thought that she could keep the school open for sixth years only. She felt that she had enough ASTI staff to offer the bones of a day’s schooling to them, and she sent a note out to parents to that effect.

But then, she said, "anxiety levels hit the roof" among ASTI teachers in the school.

"They want to stand shoulder-to-shoulder with their colleagues in the TUI," she said.

Speaking on the eve of the strike, she said yesterday had been "the toughest yet in my career".

She supports the TUI strike.

"They got it all wrong," she said, referring to the 2011 decision to cut pay for new entrants, "and they have created so much trouble".

She said around one third of her own teaching staff are on the lower pay scale.

But she feels today’s action has left her in an impossible position, attempting as a principal to fulfil her duty to students; her legal obligation to open the school and be available herself for work; but also - and crucially - to maintain good working relations among her staff.

"I just wish that the two unions would partner up and go out at the same time," she said. ASTI members may not be striking but the majority of them share with their TUI colleagues a great concern and frustration over lower pay scales for teachers recruited since January 2011.

The rules governing strikes are clear, and they have been outlined to schools in circulars sent out by the school management bodies.

The circular sent to ETB schools states: "Employees in the school/college/centre who are members of other unions or who are non-union members can pass a picket."

It goes on to state that "all staff other than those participating in the strike action will be expected to be available for work as normal".

The school principal said tensions in her dual union school have been running high.

"It’s a farce," she said, "the trade unions and management bodies say that workers who are not in the TUI may be deemed to be in breach of their contract if they do not attend for work, but the reality on the ground is very different".

"The thoughts of crossing the picket line is a terrible one for my ASTI staff."

She did not want to identify herself or her school for fear of inadvertently causing difficulties for her staff.

There may well be other schools in a similar position; with ASTI teachers who should - in the eyes of the law - be passing pickets, and making themselves available for work, but who won't be, and where a blind eye is being turned in order to maintain staff relations.

The older religious-run schools have traditionally been ASTI schools. But, ironically, a significant number of ASTI teachers left that union and joined the TUI in recent years as a result of unhappiness at industrial action that the ASTI union was engaging in. So many more teachers in these schools are now TUI members.

The Joint Managerial Body, which represents many of these dual union schools, says it is aware of 50 that will remain closed.

Yesterday evening this school principal sent out another note to parents. It was met, she said, with great understanding on their part.

The school, she said, would be closed to all students, including 6th years, as a result of the TUI strike.

It will reopen as usual on Wednesday.