A report from the Economic and Social Research Institute says the economy will have another year of strong growth this year and next.

It forecasts unemployment falling to around 5% in 2018, and the Government achieving a small surplus.

It says keeping growth on a sustainable path will be the key policy challenge next year.

Strong growth in jobs and tax revenues point to an economy that should grow at about 5% this year, and just over 4% next year.

It is domestic factors rather than exports that are powering this growth, as the economy continues its strong rebound from the economic crisis.

The ESRI has based its growth forecast on the revenue growth seen in the monthly Exchequer returns, and the growth in employment recorded quarterly by the CSO.

But there are some dark clouds, notably Brexit, which may already be impacting on the most exposed sectors, with the ESRI noting negative investment levels in the food and agriculture sector over the past 18 months.

Interest rates that are much higher than the Euro Area average may also be holding back investment in the SME sector here, which is also more Brexit exposed.

Without investment, industries face an uphill battle to grow, and the ESRI is looking closely into investment by Irish-owned companies over the coming months.

Brexit may also be affecting the performance of the UK economy.

It notes the big downward revision to UK growth forecasts by the Office for Budget Responsibility, the UK's fiscal watchdog.

The ESRI says this "illustrates the precarious nature of the UK economy especially given the uncertainties of the Brexit outcome".

It says that while Ireland's trade has diversified in recent times "the performance of our closest neighbour is still important in generating external sources of growth for the domestic economy".

Irish-owned firms are far more likely to have a very high proportion of their foreign trade with the UK than the less jobs' rich multinational sector, which is more diversified in its export destinations. 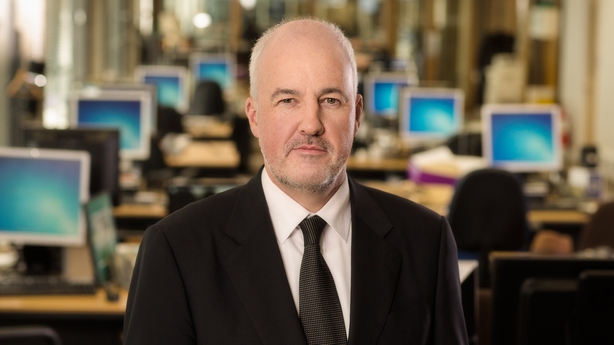 This edition of the ESRI's quarterly economic commentary includes a research note by professors Kieran McQuinn of the ESRI and Karl Whelan of UCD, who update a 2008 research paper on long-term growth prospects in the Euro Area.

They find that while the Euro Area economy is growing strongly at the moment, this is a cyclical upswing, reflecting a decline in the relatively high unemployment rates that had persisted since the financial downturn.

This is masking a long-term downward trend in productivity in Europe, which has been evident since the mid 1990s.

The falling working age population in the Euro Area, no increase in hours worked, the slump in investment during the great recession, and very weak total factor productivity growth all suggest a baseline average real GDP growth rate of just 0.6% over the next decade.

They say this is "sobering for those expecting economic growth to deal with the Euro Areas debt problems in the coming decades".

Their research also suggests that Euro Area growth figures may have been contaminated by the so-called "Leprechaun Economics" effect that so distorted Irish GDP figures (with an official growth rate of 26% recorded in 2015).

The effect is more clearly seen in the total factor productivity numbers, which averaged 0.6% for the Euro Area including Ireland during this period, but halved to 0.3% when Ireland was excluded from the calculation.

In other words, half of the productivity growth recorded in the Euro Area in these years was due to issues related to the activities of multinational companies that had effectively nothing to do with the real economy of the Euro area.

While just 0.3% of the 1.6% average GDP growth in the Euro Area was due to productivity gains, the biggest chink - 1% - was due to increased labour input, mainly reflecting the fall in the unemployment rate.