A father, whose son was seriously injured following a hit-and-run in Tallaght in Dublin earlier this week, has appealed for anyone with information about the crash to "have some morals" and contact gardaí.

John O'Reilly said someone needs to take responsibility for their actions.

His son Sean remains in intensive care in Our Lady's Children's Hospital, Crumlin following the crash at 9pm on Cheeverstown Rd on Sunday, which happened while he was cycling his bike.

Mr O'Reilly described Sean's physical injuries as "horrific" and said his mental state is quite fragile. 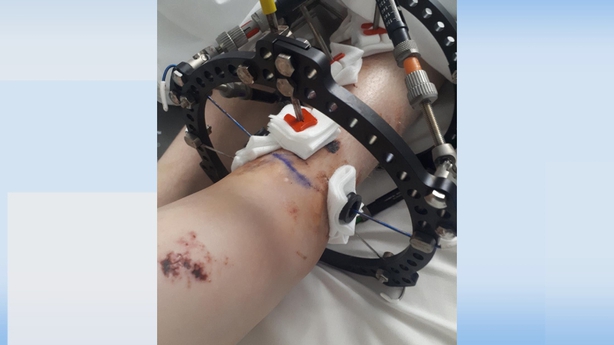 He said he bought Sean a bike for Christmas and it was in good condition and fully kitted out with lights.

He told RTÉ's Today with Sean O'Rourke how he discovered his son had been in the accident after he called Sean to see where he was and a passer-by answered his phone.

"I found my son on the ground and his bike obliviated (sic). The physical injuries are horrific but his mental state at the minute wouldn't be the greatest either.

"If it was his son, his daughter, any family members to see the state I seen my son in and what he, or she, left my son in, I'd appeal for them to hand themselves into the police station. Have some morals."

It has been established that the car involved in the hit-and-run was a black SAAB 93, the year was between 2004 to 2007.