Cars will be reduced to one lane on the quays in Dublin city centre and banned from turning right onto O'Connell Bridge from Bachelors Walk under new traffic management plans.

Dublin City Council said the changes, which will begin next Sunday, are being brought in because Luas Cross City will soon begin testing and also to improve bus services.

The Luas will be running northbound across O'Connell Bridge every three minutes at peak times when it begins full service in December.

Bachelors Walk has emerged at the worst bottle neck in the city for Dublin Bus services, especially for buses trying to turn right across two lanes of traffic to get onto O'Connell Bridge.

Under the new plans, there will be an extra bus lane on the north quays from Upper Ormond Quay to Eden Quay and on the south quays from Burgh Quay to Essex Quay. This will reduce cars to one lane on both stretches.

"The additional bus lanes will alleviate the difficulties faced by public transport on the quays, where the worst delays for buses in the city are experienced.

"At the peak morning time of 8am to 9am, over 7,000 people travel along the north quays on buses. This compares to round 500 cars and the same number of cyclists," he said.

The city council had intended to ban private cars from travelling straight onto Eden Quay from Bachelors Walk but revised their plans after criticism from local businesses and north city residents who were concerned about displaced traffic.

Cars will now be allowed onto Eden Quay as well as turning left onto O'Connell St but buses will be given priority at a new set of traffic lights to be installed on Bachelors Walk near Litton Lane about 100 metres from O'Connell Bridge.

Cars will still be allowed to turn right onto O'Connell Bridge from the south at Burgh Quay. 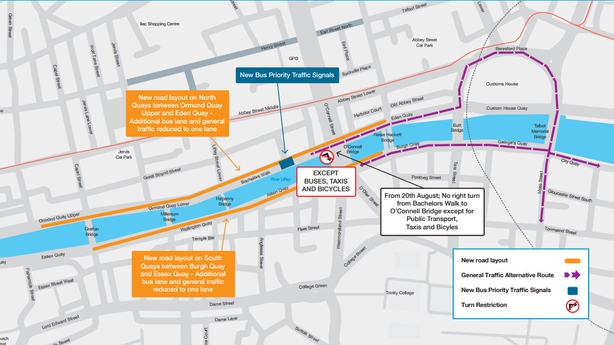 The city council has warned that if commuters in private cars continue to use the north quays in the same numbers it could produce long tailbacks.

The operation of the new system will be assessed next February.

Business groups have expressed concern at the effect of the new traffic measures when commuter volumes return to normal next month.

Graeme McQueen of Dublin Chamber called on Dublin City Council to be prepared to make changes if serious problems occur.

Conor Faughnan of the Automobile Association is predicting increased congestion, saying that the north quays are already a "pinch point" and that any further tightening could cause tailbacks as far away as Chapelizod.

In a statement, Keith Gavin of the Irish Parking Association, who formed the Dublin For All group with other businesses to oppose the traffic restrictions, said "we are disappointed with this announcement and very concerned about the changes. We have already highlighted in our submission to Dublin City Council the potential for damage to city businesses which these changes will mean."