A High Court judge has severely criticised the Government's handling of the regulation of international surrogacy and its drawn-out defence of a High Court case on the issue.

It followed reports at the weekend of progress on surrogacy legislation while the State is defending a High Court case on the same issue.

In a wide-ranging rebuke, Mr Justice John Jordan branded as "unfair and completely wrong" the treatment of a couple whose High Court case on the issue of surrogacy has been fully challenged by the State up to now.

The judge said it was unacceptable for a court to learn of plans for legislation through media reports on day five of a case concerning those very issues.

He said it was unfair to the family and to the public that an important policy issue had been dealt with in this manner.

He made the comments after adjourning a case taken by the parents of a boy born through gestational surrogacy abroad who say there was an urgent need for his genetic mother to be legally recognised because his father is battling a life-threatening illness.

Kathy and Brian Egan from Kilkenny say the State's failure to allow for the legal recognition of the boy's genetic mother amounts to discrimination and a breach of his rights under the Constitution and the European Convention on Human Rights.

Today, lawyers for the State confirmed that work is "at an advanced stage" to bring proposals to Cabinet in respect of the regulation of international surrogacy.

Mr Justice Jordan said the emergence of reports in the media led him to ponder if the court was being treated with respect.

He said: "This is day five of this hearing and the State has been represented throughout... how is it right that this is how the State decides to deal with this court in terms of advising it of its intentions in relation to the core issue in these proceedings?"

Senior Counsel Mary O'Toole, representing the State, said it was at no stage the intention to show any disrespect to the court or the plaintiffs.

She said the legislative process was taking place independently of the court proceedings as had been outlined in submissions earlier in the case.

Ms O'Toole said the judge's comments would be relayed to her clients but pointed out that certain things "are not in our gift".

She said every effort was being made to clarify the situation.

She said the manner in which the case had been defended was a reflection of the view that the regularisation of (international surrogacy) was not a matter that could be done as a constitutional right but was a matter for the legislature and those had been the legal submissions throughout the case.

However, the judge said media reports had indicated that a memo would go to Cabinet in the next two weeks and these newspapers did not "dream up" the reports which must have come "either from a press release or Government sources".

"This should have been dealt with long ago, the commitment made and the matter progressed instead of the trenchant opposition to the reliefs being claimed by the applicants... and in the middle of the case there is publication saying "well by the way we are well advanced in bringing a memo to cabinet in order to provide a route to parentage".

He added that it appeared commercial surrogacy was now to be treated with retrospective recognition of international surrogacy which would apply to the Egans and "it is on day five of this case that the court is told about this it is not good enough".

The judge said: "The separation of powers is an important Constitutional prerogative which requires mutual respect between the organs of state but unfortunately what I read over the weekend caused me to ponder whether the respect shown to this court was proper.

He also said he believed it was "completely wrong" that the Egans had been dealt with in this fashion.

He said it was "completely wrong and unfair" that the state "uses up time and does not deal with the issue with the priority and expedition required.

He said: "Because they are dealing with children and the parents of children and it is all the more important in this case because the Egans do not have the luxury of time."

He said it was his view that the State "could have done better and made things a bit easier for these two decent people who are not asking for too much in the context of seeking recognition of the practical situation in terms of parentage".

"There is a legal process and there is this case but there is a basic fairness also and I am far from satisfied that leaving matters to day five or the Sunday before the clarify is fair.

"It all should have been done long before this matter commenced in October.

"A degree of expedition was sadly lacking and I hope that will now change."

The judge agreed to adjourn the case until next month when he said he would expect an update from the State on the issue.

Counsel for the Egans Micheál P O'Higgins said they welcomed the developments but the emergence of newspaper reports at the weekend had added to the uncertainty for the family which is why they sought clarity on the issue.

Mr O'Higgins said if the developments reported in the media come to pass their position will have been fully vindicated but the case would need to be paused in the meantime.

She later told RTÉ News she was "delighted with the development" and was very grateful to Mr Justice Jordan for the care and interest he has taken with the case thus far.

She said she was heartened by the work done by Government ministers to bring forward the "vital" legislation adding "today is a very good day".

She said she was optimistic and hopeful and had faith in the ministers involved.

Her message for Government today would be that it would be "a very good Christmas present for our family and all the families, but I know there is work to be done and time to be spent and care to be taken but we are a great country and its fantastic." 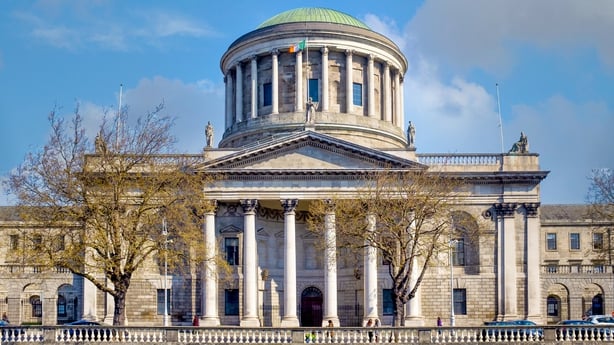 The Egans took judicial review proceedings aimed at securing declarations from the High Court that the State has failed to uphold the rights of the child and had discriminated against him.

In a sworn statement Ms Egan described how surrogacy provided her and her husband with "a beacon of hope in an otherwise hopeless situation" to complete their family.

The court was told the couple had a son in 2009 but after repeated miscarriages and failed fertility treatments they opted to use the service of a surrogate mother in Ukraine to carry their embryos and their second child was born in 2019.

Under current Irish law, Ms Egan cannot be registered or recognised as his legal mother.

Her husband Brian was granted a declaration of parentage and she was appointed his guardian when he reached the age of two.

She said this status will lapse when he reaches the age of 18.

Shortly before the boy's second birthday, her husband received a "devastating diagnosis" in the form of an aggressive type of cancer.

She said the situation had "now become desperate" and they needed to safeguard their son's parentage as a matter of urgency as his only legal parent is battling a life-threatening illness.

Senior counsel Micheál P O'Higgins referred to a sworn statement by the couple's solicitor Annette Hickey who specialises in surrogacy.

In the statement, Ms Hickey the European Court of Human Rights has held on a number of occasions that Article 8 of the European Convention on Human Rights requires states to provide for the possibility of recognition of parent-child relationships arising from the surrogacy at a minimum in all cases involving a genetic link between the child and the intended parents.

She said a 2018 study showed Ireland to have the second-highest rate of surrogacy among 90 countries.

Despite Irish intending parents having pursued surrogacy as a route to parenthood for upwards of three decades with numbers increasing in recent years, surrogacy has never been regulated in this jurisdiction, she said.

The general scheme of the Assisted Human Reproduction Bill 2017 had been published and part six of the Bill focused on the regulation of domestic surrogacy but does not address the issue of international surrogacy, the court was told.

In their action against the State, the couple and their son were seeking declarations that the State has failed to vindicate their Constitutional rights due to a failure to provide a means by which Kathy Egan can be recognised in law as the mother of her youngest son.

They also seek a declaration that the State has failed to vindicate the child's rights under Article 8 of the European Convention of Human Rights and a declaration that the failure to provide for retrospective declarations of parentage for children born through surrogacy amounts to invidious discrimination contrary to obligations under the Constitution and the ECHR Act.

In defending the claims, lawyers for the State said that any decision concerning the rights of a genetic mother and a child born through international surrogacy would have significant and possibly unintended consequences for all areas of assisted human reproduction.

Senior Counsel Mary O’Toole said from the State’s point of view there was "nothing but respect for this family".

However, while it may seem the court was being asked a simple question in the case before it, the issues at hand were far more complicated.

She said it was for that reason that the majority of the Supreme Court had previously expressed the view that the type of complexity in surrogacy cases meant it was a matter that should be determined by the legislature and not the courts.

She said the Supreme Court took the view that the issues engaged involved deep questions of policy and the court had no function in the area.

In the case currently before the court, there are no complicating factors but any decision the court makes will have consequences for every single other situation in circumstances where those situations are very diverse, she said.

Ms O’Toole said if there was a finding of a right to recognition of genetic motherhood then every piece of legislation would now have to be interpreted in the light of that finding and may be undermined by it.

Rather than seeking a pathway to recognition, the plaintiffs were asserting a right to recognition and had already designated the pathway by genetic connection and not gestation.

This she said would have "ripples" through the system and would have unintended consequences.

While the plaintiffs asserted they were only looking for recognition of the genetic mother as the legal mother if she was the caregiver and the de facto mother this could have consequences for genetic donors of material for the production of embryos who could find themselves to be parents whether they wanted to or not".

She said pending legislation would confer legal motherhood on the surrogate mother regardless of genetic connection. It was envisaged that the surrogate mother’s consent to a declaration of parentage in favour of the intended mother would be required.

The simple declaration of a constitutional right would create a fixed point and everyone would have to go around that fixed point, she said.

Any decision would have reverberations not just in surrogacy but in all forms of assisted human reproduction. The pending legislation was "extremely complex and technical" and gives an idea of the various things involved in just thinking about whether or not a genetic mother should be the legal mother.

Govt urged to speed up law on international surrogacy

Man sentenced to life in jail for Cameron Reilly murder