Wait times for the hearing of cases in the Supreme Court are now averaging 122 days, the shortest level in the court's history, according to its annual report.

The time between filing a notice of intention to proceed in the Supreme Court and a hearing date once stood at an average of four years and hit seven years on occasion, but a number of changes to procedures and rules have resulted in a reduction.

The court's annual report was published in Kilkenny, where the court was sitting for the first time in its history.

This followed a sitting earlier in the week in Waterford and is part of the Supreme Court’s "national outreach programme", which saw it sitting in Galway last year and will be followed in 2021 by sittings in Castlebar and Letterkenny.

"The legacy appeal issue which subsisted in recent years has been resolved in this court and substantively resolved in the Court of Appeal," he said.

Chief Justice Frank Clarke described as "disappointing" the uptake of a new system put in place for online applications for leave to appeal to the court.

"However, discussions took place just before Christmas with representatives of the Law Society in that regard," he said in the report.

"Proposals for some small changes to the way in which the system operates are under active consideration and I would very much hope that, by this time next year, I will be able to report on a radically changed landscape in this regard."

Mr Justice Clarke also said he was "convinced" that the international obligations of the court will "increase in importance" in the coming years, not least because of Brexit.

He welcomed the establishment of the Judicial Council but said that the proper operation of the council and its committees "will place additional burdens on the judiciary".

"We must be realistic about the demands that places on judges who have busy lists to conduct," he said.

Before the court sitting, a protest was held outside the courthouse in Kilkenny by some local business people who are concerned about the increased levels of insurance claims in Ireland.

The protest was organised by Glenn Tector of Sonix Entertainment.

"We have been hit by the insurance crisis in Ireland, massively, and it's the awards that the courts are giving out that are affecting our businesses," he said.

"The insurance companies told us that if the level of awards are not brought down in Ireland, we cannot operate." 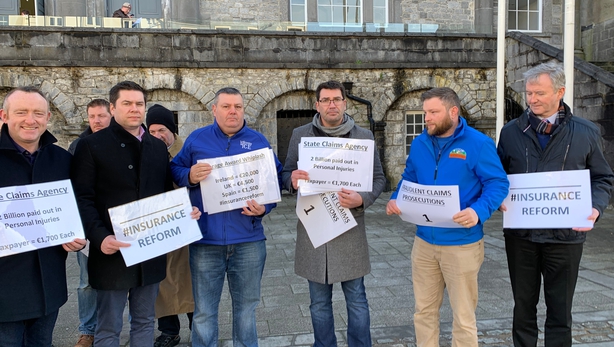 Ireland is now "the most uninsurable country in the world," he said.

He said the reason the protest was being held outside the Supreme Court sitting was in an attempt to get the Book of Quantum, which advises on levels of compensation in personal injury claims, recalibrated "in line with Europe."

Gareth Acorn of Nore Valley Farm, said insurance rates "are going through the roof" and things need to change.

"Last year our insurance went up 150%… I spent over two or three weeks on the phone trying to get insurance and I got insurance by the skin of my teeth. That money has to come out of my bottom line. Realistically, if it carries on that way, we're not going to be able to afford to stay in business," he said.

Man being held on suspicion of murder over Kilkenny death