A 24-year-old man has been found guilty of the manslaughter of Co Galway publican John Kenny in 2011.

Marian Lingurar Jr, with an address at Blackpool, Co Cork, was charged with the unlawful killing of Mr Kenny at Kenny's Bar, Main Street, Oughterard, on 25 September, 2011, as well as a second charge of trespass.

Mr Kenny was tied up and had suffered a violent and sustained assault. His body was discovered by his wife and daughter in the pub.

Lingurar Jr, who was aged 16 back in 2011, was found guilty at Galway Circuirt Court by a jury of seven men and four women in a trial that lasted three weeks.

He was also found guilty of the second charge of trespass with intent to commit theft.

Lingurar Jr, who is originally from Romania, had absconded from the jurisdiction in 2011, but was arrested in Cork last May.

Lingurar Jr, who declined to give evidence during the trial, had denied any involvement in the assault and robbery of a relatively small amount cash from Mr Kenny's pocket, by a gang of men who arrived at the pub that night. 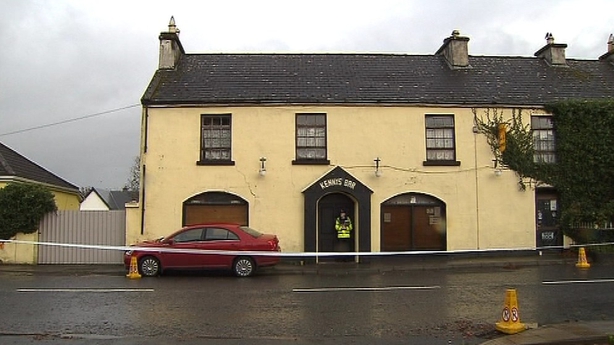 He claimed Mr Kenny was his friend and he liked him because he had given him a job as a bouncer. He said he was sad to hear he had been killed.

He told gardaí he did not know those involved and claimed he was at home in bed when others went to Oughterard, viciously assaulted Mr Kenny, robbed cash from his pocket, tied his hands behind his back using fairy lights from the bar, and left him lying, face down on the toilet floor to die.

Mr Patrick Gageby SC, prosecuting, told the jury on the first day of the trial on 15 January that Mr Kenny had been left the family pub by his late mother and following an amicable separation from his wife, Kathleen, in the 1990s he moved in there to live.

The couple remained very good friends down through the years and were devoted to their daughter, Gillian.

He said Mr Kenny was held in very high regard at Presentation College, Athenry, where he had taught for many years and he only opened Kenny's pub at weekends.

A man named Florin Fitzpatrick and the accused man's father, Marian Lingurar Sr, worked in the pub at weekends.

The trial heard Mr Kenny could not get rid of them and he was afraid of them.

He said the accused had worked as a bouncer in the pub the night Mr Kenny died.

Mr Gageby said it was the prosecution's case that the accused, having gained Mr Kenny's trust plotted with others to rob Kenny's pub after it closed on the night of 25 September.

He said the accused got a lift back to Galway with his father after finishing work along with the barman, Mr Fitzpatrick, at 1.30am, but then he returned to Oughterard at 2.20am and stayed there for 40 minutes.

Mr Gageby said it was the State's case the accused travelled back to Oughterard in the early hours of the morning to visit an assault on Mr Kenny and rob him.

He told jurors it was a "joint enterprise" as other people were involved in the attack as well as the accused.

Lingurar Jr was remanded in custody and will reappear before Galway Circuit Criminal Court for sentencing on 8 May.