Ireland and Ulster rugby player Stuart Olding has rejected suggestions he used a woman who has accused him of rape as a "vehicle" to satisfy his sexual desires.

He was giving evidence in his defence at Belfast Crown Court.

Mr Olding conceded that the young woman would not have been a match for two professional rugby players but insisted the sexual activity was consensual and rejected prosecution claims that his account of the night was nonsense.

Prosecutor Toby Hedworth QC said: "That night you were not interested in what [the complainant] wanted to do or was prepared to do.

"She was, I suggest, to each of you just a vehicle for your own sexual desires that night?"

Mr Olding and his Ulster and Ireland team mate Paddy Jackson, 26, deny raping the same woman at a house party in south Belfast in June 2016.

The prosecutor put it to him: "I am asking you to consider what you did to (the woman) in the early hours of June 28 2016 and what you did you knew full well you should not have done."

He replied: "I don't agree with that."

The prosecution said: "When you entered that bedroom that young woman looked at you and said to Paddy Jackson 'please, no, not him too'."

Mr Olding replied: "I don't remember any of that happening."

Mr Olding told the court he was "invited" to join the sexual activity by the complainant.

"I was invited in by (her) and that's the reason I went in," he added.

The court heard how the rugby player, who had returned from a tour of South Africa as part of the Ireland squad, had consumed eight cans of Carlsberg, four pints of Guinness, two gin and tonics, five vodkas with lemonade, five shots of Tequila or Sambuca and another beer during the course of the night.

He had also eaten pizza, as well as a burger and chips.

"To put it in jargon," the prosecution lawyer said, "it was a bit of a skin full."

Mr Hedworth continued: "The danger if you have had far too much to drink is the situation where people are doing things that are not only not appropriate but are downright wrong."

Mr Olding answered: "For some people yes, but I was in complete control of my actions."

The lawyer added: "If you had that amount of drink there's a danger of disregarding the wishes or views of another person if they get in the way of what you want to achieve."

Mr Olding replied: "I wouldn't agree with that."

The trial, which is in its sixth week is being heard by a jury of eight men and three women.

Mr Olding insisted the sexual activity had been consensual and said if he had been aware of distress he would not have continued.

The prosecution put to Mr Olding: "There comes a stage that night where you and Paddy Jackson are in his bedroom with that young woman.

"You are both professional rugby players. Your work is physically engaging, using not only your skill but also your strength in an attempt to overpower your opponent. What match is a [young] woman going to be for the pair of you if she is going to try to resist?"

But pressing the point further the prosecution again asked what match the woman would have been for the two accused if she didn't want to engage in sexual activity.

Mr Olding answered: "I don't think she would be a match."

Later, Mr Hedworth rubbished Mr Olding's account that he had been beckoned into the bedroom.

"She just beckons you in and you take over. This is complete nonsense, isn't it Mr Olding?"

The defendant replied: "No, it is not nonsense at all." 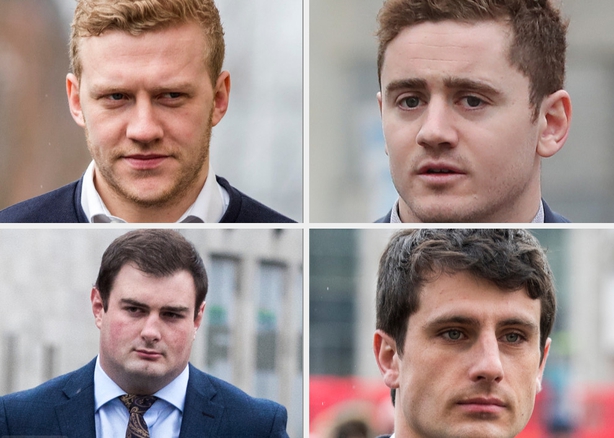 Earlier, Mr Olding told the court he is embarrassed and not proud of text exchanges in which he boasted of sexual activity.

He said: "I feel very embarrassed sitting here reading them.

The court has previously heard about a series of exchanges with friends on the WhatsApp messaging service in which Mr Olding had posted: "We are all top shaggers."

"It was immature boasting with my friends," he told the court.

Explaining his WhatsApp comment in which he said: "It was like a merry-go-round at the carnival", he added: "It does not even mean anything. It was just said in an excited state. It is nonsense."

During questioning by his defence counsel Mr Olding gave details of the sex act he says was "performed" by the complainant for about ten minutes with two brief interruptions - once when co-accused Mr Jackson went to look for a condom and when he "asked" the woman to remove her top.

When asked if there was anything to suggest the complainant was not consenting to what was happening, he said: "No, not at all.

He had earlier been asked if he had forced the woman in any way. Mr Olding answered: "No, I did not force her in any way."

The rape trial being heard by Judge Patricia Smyth is now in its sixth week.

The court heard how Mr Olding had initially gone upstairs to find somewhere to sleep. The door to Mr Jackson's room was closed but he opened it and walked in.

He said: "I saw Paddy on his back and (the alleged victim) on top of him and they were kissing at the time.

"I'm certain Paddy's top was off. I'm not sure about his trousers. (The woman) was fully clothed."

When asked what his reaction had been, he said: "I had just intruded in two people kissing on the bed. I turned to leave."

He added: "(The woman) turned around and held out her hand as an invitation to stay. I'm sure of that.

"I closed the door and went over to the bed and started to kiss (her)."

In earlier evidence, Mr Olding insisted he had told police the truth about what happened when he was interviewed two days after the alleged attack.

Mr O'Donoghue said: "Do you stand by what you told the police? Is that the truth?" Mr Olding replied: "That is the truth."

The court also heard how Mr Olding had returned from a South African rugby tour as part of the Ireland squad shortly before the alleged rape on June 28 2016.

He said: "Things had gone very well for me on the tour.

"I had managed to get two caps. I thought I was really going to progress from there.

"I was delighted. I was in a good place."

Evidence was given about his education at Ben Madigan Preparatory School and Belfast Royal Academy and his rugby career, which has been dogged by injury, with a number of surgeries to repair torn ligaments on his knee and elbow.

"Yes, he is a very close friend," Mr Olding added.

Mr Jackson, 26, from Oakleigh Park in Belfast, and Mr Olding, 24, from Ardenlee Street in the city, deny raping the same woman in south Belfast on 28 June 2016.