Doctors have reported a marked increase in the number of children with upper respiratory tract infections, and say they are worried this is masking the true number of Covid-19 cases.

A GP in Tramore, Co Waterford, said children could have between six to eight respiratory tract infections over the course of the winter.

Speaking on RTÉ's Morning Ireland, Dr Austin Byrne said parents who are being repeatedly asked to isolate children are in a very difficult situation and it becomes successively more difficult for parents to go for a PCR test and exclude their child from school or creche.

"We have a real mismatch between the social need for solidarity, and the ... pressure comes upon parents and families to meet the needs of society. So it really is a difficult place that they're in at the minute," he said.

Dr Byrne also said it is "sobering" to think that while the rate of Covid-19 detection in south Waterford appears high, it may simply be two to three weeks ahead of the rest of the country.

Dr Martin Daly, a GP based near Ballygar in Co Galway, also said there has been an increased presentation of young children with respiratory illnesses over the last number of weeks.

Speaking on the same programme, he said he and his colleagues have noticed an increase of "Covid fatigue" among parents who are becoming more hesitant to have their children tested because of the logistical difficulties that arise if a test is positive.

Dr Daly said it is a very difficult situation, but warned that "there is a price to this" if cases are not identified, and urged parents to act if their children have symptoms.

He said there is a number of viruses circulating and lot of them interchange and mimic each other.

"We are going to have a difficult winter", he said, adding that the health service could become overwhelmed, which will have a knock-on effect on other non-Covid services.

Meanwhile, a Professor of Immunology at DCU said the increase of Covid-19 cases in primary school children is unsurprising given the cohort is not yet vaccinated.

Professor Christine Loscher said there is roughly the same percentage of positive cases in this group, compared to the two previous weeks, and a massive surge is not evident.

Speaking on RTÉ's Today with Claire Byrne, Prof Loscher said everyone should focus on their own interactions instead of concentrating on children's activities.

She said testing and tracing in schools needs to be addressed and called for a more streamlined approach to be introduced where the turnaround on contact tracing can be done within a six-to-seven day period.

Prof Loscher also warned that there is "potentially a major issue coming down the line for the healthcare system" and giving booster shots to healthcare staff and speeding up the roll out of boosters to the over 60s could address this.

Speaking on the same programme, a GP based in Shannon said contact tracing in schools needs to be reintroduced when schools reopen next week.

Dr Yvonne Williams said that without contact tracing of asymptomatic children who return to classrooms next week, it will be difficult for parents to manage symptoms going forward.

She said the messaging for parents is also confusing, asking them to limit children's activities outside of school, including outdoor activities, while allowing other measures to be relaxed. 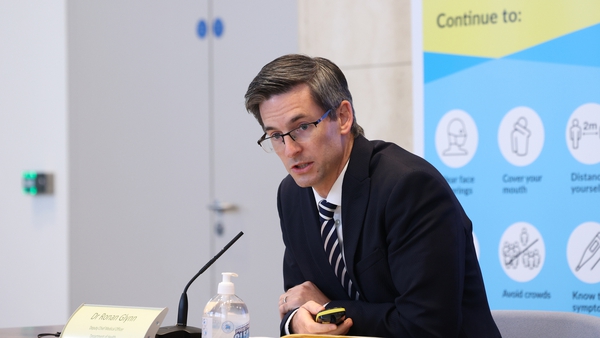