Rohan Aggarwal is 26-years-old and not due to complete his medical training until next year.

And yet, at one of the best hospitals in India, he is the doctor who must decide who will live and who will die when patients come to him gasping for breath, their family members begging for mercy.

As India's healthcare system teeters on the verge of collapse during a brutal second wave of the novel coronavirus, Dr Aggarwal makes those decisions during a 27-hour workday that includes a grim overnight shift in charge of the emergency room at his New Delhi hospital.

Everyone at Holy Family Hospital - patients, relatives and staff - knows there are not enough beds, not enough oxygen or ventilators to keep everyone who arrives at the hospital's front gates alive.

"Who to be saved, who not to be saved should be decided by God," Dr Aggarwal says.

"We are not made for that - we are just humans. But at this point in time, we are being made to do this."

India has reported a global record of more than 300,000 daily cases for the last two weeks - figures experts say are almost certainly conservative. In the capital, fewer than 20 of more than 5,000 Covid-19 ICU beds are free at any one time. 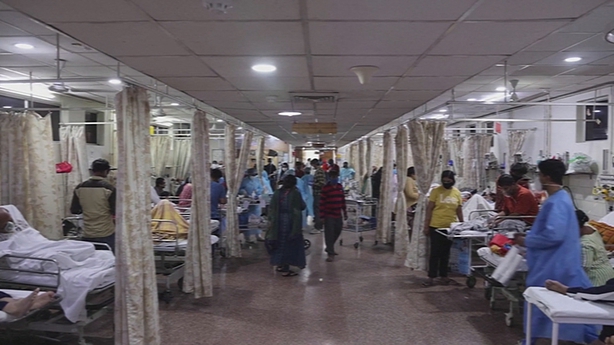 Patients rush from hospital to hospital, dying on the street or at home, while oxygen trucks move under armed guard to facilities with perilously low stocks. Crematoriums work round the clock, throwing up plumes of smoke as the bodies of victims arrive every few minutes.

During his marathon shift, which Reuters documented to provide one of the most comprehensive accounts of overwhelmed hospitals during India's harrowing surge, Dr Aggarwal says he fears what will happen if he gets infected too, knowing that his own hospital will be unlikely to find him a bed.

He is unvaccinated: He was sick in January when shots for medical professionals were being rolled out, and then by February, he began to relax.

"We were all under the misconception the virus had gone," he says.

When Dr Aggarwal begins his shift around 9am, four bodies lie in one of the areas where staff are supposed to remove their protective equipment.

In the emergency room, conditions are even more cramped. Patients and relatives crowd every available space, many wearing no protection except for a simple cloth mask. Doctors and nurses have stopped wearing full protective equipment too - it is simply too difficult to work in.

Trolleys are close enough for patients to touch each other. One man even lies in a storage area surrounded by bins of medical waste, a relative dragging in a new oxygen cylinder as one runs out. 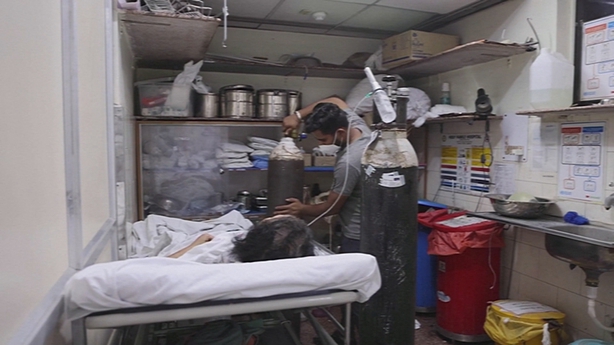 In normal circumstances, Holy Family is one of the best hospitals in the country, attracting patients from across the world - and it still is, considering the conditions in government hospitals, where patients lie two to a bed, or die outside on trolleys in the baking sun.

But the facility is still in a desperate position.

The hospital, which normally has capacity for 275 adults, is currently caring for 385. A sign posted outside shows the number of available general and intensive-care Covid beds remains the same as it has for weeks: zero.

Heading the ER, with its broken bones and coughs and colds, is usually a relatively simple task, left to a more junior doctor while senior consultants and specialists work in the ICU, where serious cases are quickly escalated. That system has long broken down, and the on-duty doctor in the ER is now one of the most critical in the hospital.

Before he begins his turn in the ER, Dr Aggarwal first makes his rounds of the general Covid wards. Along with a senior colleague, he is responsible for 65 patients. That gives him a maximum of three to four minutes to see each one before any emergencies, which frequently occur.

He is minutes into his rounds when he receives an urgent call - one of his patients is sick. He sprints down the stairs and along a dimly lit corridor to Room 323, where an elderly man is barely conscious.

"He is on the way down," Dr Aggarwal explains to the man's son.

The son sits with his head in his hands while space is made in the ICU. The patient is one of the lucky ones: He's already been admitted to a Covid ward, unlike those pleading to get in, and thus has access to intensive care.

"They don't have beds, but they will have to manage," Dr Aggarwal says.

A security guard, Mahendar Baisoyar, is posted outside the emergency room door to ensure relatives don't try to secure a bed "by force," he says.

Last month, relatives at another hospital in the capital attacked staff with knives after a patient died. The city state's top court has warned that more law-and-order problems at hospitals are likely if shortages continue.

Like many others in Delhi, Holy Family has taken to Twitter to beg state and federal politicians for help securing oxygen.

Its medical staff look at everyone, give first aid as best they can, but there just isn't space for everyone. 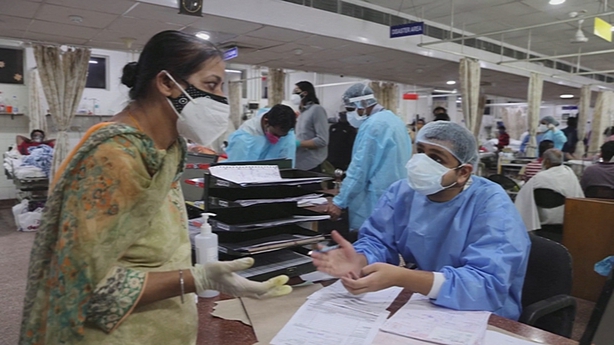 Others in the ER are so sick they are in urgent need of a ventilator, and Dr Aggarwal pleads with families to look elsewhere. But they already have.

By the time his morning rounds end after about three hours, Dr Aggarwal's eyes are already burning from tiredness.

This wasn't what he expected when he moved to the missionary-founded Holy Family, where depictions of Christ are everywhere: looming over the main staircase, watching over patients in the ICU, in cheap plaster idols wrapped in plastic in the shuttered gift shop.

"I am vaccinated by the precious blood of Jesus," one poster says. "No virus can touch me."

No matter where Dr Aggarwal is, he hears the sound of heart-rate monitors as he tries to sleep. He hears their gentle chimes and staccato bursts as he naps fitfully at the hospital. But he also hears them at home in his own bed, making it impossible to forget about the deaths under his care not from lack of trying, but lack of resources.

He finds respite in a nearby 24-hour convenience store, with its powerful air conditioning, imported cereal and Selena Gomez playing softly on the in-store stereo.

"It's really a depressing atmosphere," he says of the hospital as he eats from a takeaway carton of biryani. "I just want to have a break of an hour or so outside the hospital so that I can just recollect myself. Because I have to be there for another 24 hours."

Like many young Indians, he still lives with his parents, and worries constantly about their safety.

Dr Aggarwal used to barricade himself in his first-floor apartment, but his mother has other ideas.

"I used to go and see them every ten days or two weeks. But my mom wants to have food with me; she can't be away from me," he says. 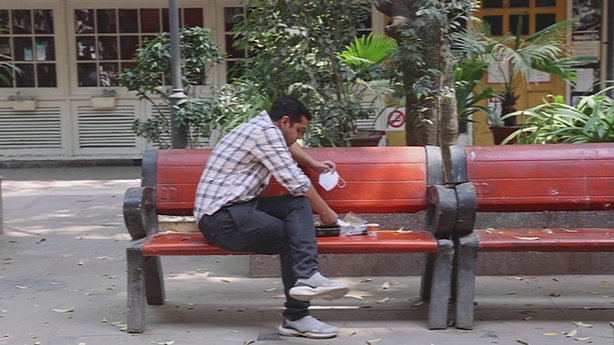 A little before 3pm, Dr Aggarwal returns for his shift in the emergency room. He sits behind a desk as relatives crowd around him, pleading for admission.

"If a patient has a fever, and I know he's sick but he's not requiring oxygen, I can't admit him," he says.

"That's the criteria. People are dying on the streets without oxygen. So people who don't require oxygen, even if they are sick, so we don't admit them usually."

"Another choice is I have an old male and I have a young guy. Both are requiring high-flow oxygen; I have only one bed in the ICU. And I can't be emotional at that time, that he is a father to someone. The young have to be saved."

He begins touring the ER, his manner brisk. He barely looks at patients who are sitting up and conscious.

Dr Aggarwal spends the night fighting constant emergencies in the wards. Three of his patients die, including a young woman.

While helping out in the ICU, Dr Aggarwal sees a senior colleague. Both of their fathers have been sick, and have recently recovered. They share a private joke, and Dr Aggarwal realises it is the first time he has laughed in weeks.

It isn't until 5am that he manages some sleep in the break room of the ER.

After 27 hours, his shift is over, and exhaustion has taken hold that makes him want to sleep for the rest of the day, and the next one too.

But he has one final job: A friend's father is sick, and he's asked Dr Aggarwal for help - one of many such calls he receives each day. Nine times out of ten, there is nothing he can do, no matter how loved or insistent the caller, but he tries all the same.

And so he puts his mask back on and heads back inside.