The Department of Health has been notified of a further 401 cases of Covid-19, while 15 further deaths have also been recorded.

Two of the deaths announced today happened this month, with three in March, six in February and four in January or earlier, while they aged in range from 56-90 years of age.

It brings the overall death toll in Ireland to 4,856, with a cumulative number of cases standing at 244,695.

As of this morning, 182 people are being treated for the virus in hospital, of which 47 are in intensive care.

The 14-day incidence rate nationally stands at 113.4, with Donegal, Kildare, Offaly and Longford among the counties were incidence is highest.

Counties with the lowest incidence rate include Kilkenny, Sligo, Cork and Clare.

Fourteen counties have recorded fewer than five new cases in the past 24 hours. 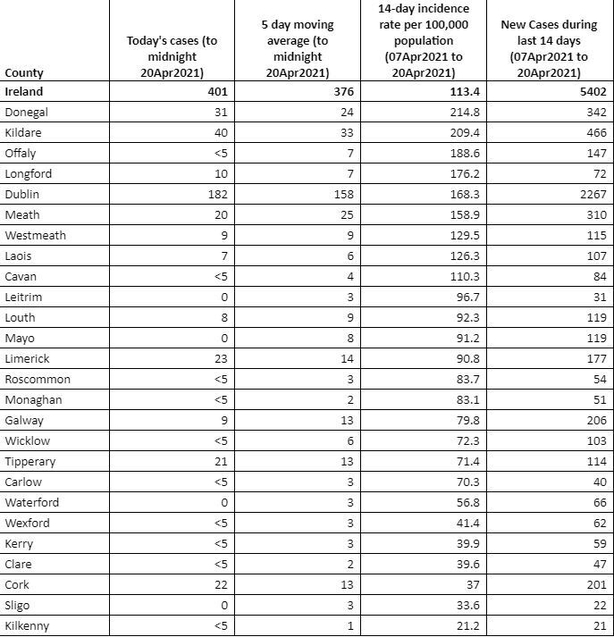 It comes as new figures showed a significant reduction in the number of Covid-19 outbreaks reported in the week to last Saturday.

All areas saw either a reduction in outbreaks, or the same number as the previous week. There were no areas where outbreaks rose.

Overall, there were 252 outbreaks reported to the Health Protection Surveillance Centre, which is a reduction of 76 outbreaks compared with the previous week.

The overall total includes 31 "late notifications" from October, December, January and February and shows that private house/family outbreaks fell by 38 and extended family outbreaks reduced by 16.

An outbreak is two or more linked Covid-19 cases.

The Health Service Executive also reported a further small reduction in the number of confirmed cases of Covid-19 in hospitals.

There were 172 patients with the disease in hospital last night, down seven on earlier in the day.

The majority of acute hospitals are now dealing with fewer than ten cases each, while the number of patients in intensive care also remains stable at 47.

The five-day moving average of cases reported by the National Public Health Emergency Team is now 380, down on the average of 396 cases a day a week ago.

The reducing trends will be important as the Government considers the further lifting of restrictions, with outdoor sports facilities, such as pitches, golf and tennis courts, able to reopen from Monday.

Meanwhile, one further coronavirus death has been recorded in Northern Ireland during the past 24 hours, taking the official Department of Health toll to 2,137.

There were 116 new cases, taking the total number of people who have tested positive to 119,351.

The number of confirmed Covid patients in hospital, 59, is the lowest figure this year. Of those, nine are in ICU, with six on ventilators,

The council area with the highest rate remains Derry and Strabane on 118.8, while the lowest remains Ards and North Down on 18.0.

A further 26,000 doses are due by the end of the month, the HSE has confirmed. 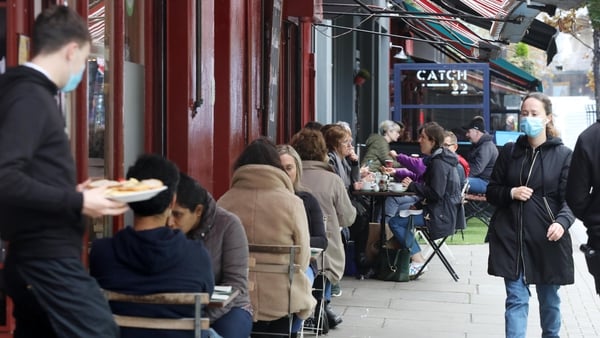