Greece has tightened restrictions on movement and extended a lockdown in more areas of the country to stem the spread of the coronavirus pandemic.

It comes after a surge in new infections piled pressure on its health system, authorities said.

A lockdown in the greater Athens region of Attica has been extended for another week until 16 March after infections showed no sign of receding.

Authorities reported 2,702 daily infections today - the highest daily figure recorded this year - up from 2,353 the previous day. Many were in Attica.

"In Attica, the pressure that the national health system is facing is not in the red, but in the deep red. Therefore we are moving from the level of increased crisis management preparedness to the level of implementing an emergency plan," Health Minister Vassilis Kikilias told a news briefing.

Mr Kikilias said that as part of emergency measures, Covid-19 hospitals in Attica were increasing their intensive care units while non-Covid hospitals would step in to take their patients that were not being treated for the virus.

To avert overcrowding, travel by car to other districts for outdoor exercise has been restricted, and supermarket shopping has also been limited to a 2km radius from people's homes.

Deputy Civil Protection Minister Nikos Hardalias said people gathering together in homes has contributed to the rise in cases.

"The facts demand vigilance and caution. Even though this has become tiring for us, it is necessary to avoid any unnecessary movement and the opportunity to abuse this," Mr Hardalias said.

Non-essential shops and schools in Athens are closed and most workers are encouraged to work from home.

The United States will have enough Covid-19 vaccines for its adult population by the end of May, President Joe Biden has said, while Brazil's troubles deepened as it registered its highest 24-hour death toll.

The two countries have the largest number of deaths in the world, with 515,000 coronavirus fatalities in the US and 255,000 in Brazil, with both counting the cost of mixed public health advice on masks and other measures.

The state of Texas took the contentious step yesterday of lifting its mask mandate, despite dire warnings from US health authorities against states rolling back steps taken to restrict the spread of the pandemic.

Mr Biden announced a major deal for pharma giant Merck to produce the vaccine shot developed by its rival Johnson & Johnson, hailing the accord as "the type of collaboration between companies we saw in World War II."

"We're now on track to have enough vaccine supply for every adult in America by the end of May," said President Biden - who previously targeted late July to amass sufficient doses to inoculate all Americans.

"That's progress. Important progress. But it is not enough to have the vaccine supply," Mr Biden said, stressing that a huge effort still lay ahead to administer the vaccines once acquired.

"Now is not the time to let up," warned the president, calling on Americans to keep social distancing and wearing masks, even as new coronavirus cases fall and more are vaccinated.

Mr Abbott said he was lifting the restrictions in Texas because of the arrival of Covid-19 vaccines and better testing and treatments.

"For nearly half a year, most businesses have been open either 75% or 50% and during that time, too many Texans have been sidelined from employment opportunities," he said.

"Too many small business owners have struggled to pay their bills ... This must end. It is now time to open Texas 100%," he said to cheers from his audience.

Michigan's Governor Gretchen Whitmer has also announced a loosening of its coronavirus restrictions, allowing larger gatherings and easing limits on capacity for restaurants and other businesses from Friday.

"The increased capacity limits outlined in this order will still give us the ability to protect public health as we carefully track variants and continue leading with science and data", Ms Whitmer told a press briefing.

Michigan has reported over 590,000 confirmed cases of Covid-19 and recorded over 15,500 deaths from the outbreak.

A scale of challenge confronting Brazil was highlighted when it registered a record 1,641 Covid-19 deaths in 24 hours.

Brazil has had a piecemeal pandemic response, with individual cities and states setting their own policies in the face of far-right President Jair Bolsonaro's repeated attacks on restrictive measures and face masks.

Several cities and states last week began imposing a new round of restrictions in a bid to avoid overwhelming their already stretched hospitals.

The country began vaccinating in mid-January, but is far off-pace to meet a government pledge of immunising the entire population by the end of the year.

A circuit break lockdown has come into force on the Isle of Man following a rise in coronavirus cases after a ferry crew member tested positive.

The island had come out of lockdown on 1 February, with schools and businesses reopening after no reports of unexplained community cases of coronavirus for 17 consecutive days.

But, yesterday, Chief Minister Howard Quayle announced a new lockdown of 21 days as a result of "transmission in our community that we cannot see and that we do not understand".

The island currently has 58 cases of coronavirus, three of which have no immediate link to identified clusters of the virus.

On 18 February, Mr Quayle announced there were cases of Covid-19 on the Isle of Man which were not among people who had travelled there and entered self isolation.

They were linked back to a member of staff working for the Isle of Man Steam Packet Company, which runs ferries to and from Liverpool, Belfast, Dublin and Heysham, in Lancashire.

At the time, the company said the crew member, who was not in a passenger-facing role, had a test while off-duty and was placed in immediate isolation, with contact tracing underway.

Under the new measures, which came into force just after midnight, schools and businesses will close and residents are urged to stay at home.

Mr Quayle said the island's vaccination programme was on track to deliver first doses to all over 50s and clinically vulnerable adults during April.

Germany seeks to extend AstraZeneca jabs to over 65s soon

Germany's vaccine regulators should recommend within days that the AstraZeneca vaccine can be given to people older than 65 as evidence mounts of its efficacy, Health Minister Jens Spahn said.

Data from Britain show that the jab works "very well" in older people, Mr Spahn told German television, adding that he had asked the regulator to adjust its recommendation accordingly so the vaccine can be rolled out quickly to those over 65. 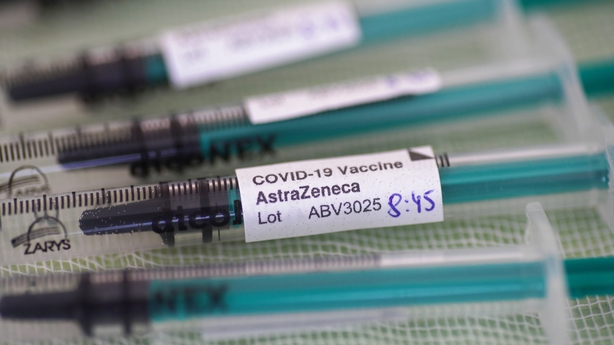 The German policy that the AstraZeneca vaccine be given only to people aged 18 to 64 has led to a low take-up of available doses, slowing vaccination efforts, prompting the government last week to urge the public to accept the jabs.

Yesterday, the French health minister said the country will allow people under 75 with existing health problems to get the AstraZeneca vaccine, departing from an earlier stance that the vaccine should be for the under-65s only.

Mr Spahn is also in favour of adopting the British practice of extending the time between the first and second jabs so that more people can be protected quickly, both for the AstraZeneca vaccine and that made by Pfizer/BioNTech.

The European Medicines Agency said it is set to decide whether to authorise Johnson & Johnson's single-shot vaccine for the EU on 11 March.

If approved by the Amsterdam-based regulator, the vaccine would be the fourth to get the green light for the 27-nation bloc, in a boost for its slow-starting vaccination programme.

Elsewhere, millions of coronavirus shots from the global COVAX scheme have arrived in Nigeria, Democratic Republic of Congo and Angola, as African countries ramped up their vaccine rollouts.

Last week, Ghana and Ivory Coast were the first African countries to receive vaccines from COVAX, which is aiming to supply two billion doses by the end of the year.

Richer countries have surged ahead with vaccinations, but many poorer countries are awaiting deliveries, prompting the World Health Organization (WHO) to warn that the crisis cannot end unless everyone can inoculate their populations.

The COVAX facility, run by the WHO along with health NGOs, is aiming to supply vaccines to dozens of countries in the first 100 days of 2021.

However, there are still critical hurdles for the rollout in vast African countries with sketchy infrastructure and an array of security challenges - a point addressed by Faisal Shuaib, director of Nigeria's primary healthcare agency.

"States without a functional airport will have their vaccines transported by road using vans with fitted cold cabins, from the nearest airport," he said.

He called the delivery - which arrived around in the capital Abuja - a "good day for Nigeria" and promised the rollout would begin in earnest on Friday, with frontline health workers the first to be inoculated.

COVAX, an initiative led by Gavi the Vaccine Alliance, WHO and the Coalition for Epidemic Preparedness Innovations (CEPI) with UNICEF as implementing partner, is aiming to deliver 237 million AstraZeneca doses by the end of May.

A record number of Ukrainians were taken to hospital with coronavirus over the past 24 hours while the quantity of lethal cases remain consistently high, health ministry data show.

Health Minister Maksym Stepanov said on Facebook that 3,486 people were hospitalised in the past day, the highest number since the epidemic hit the country of 41 million last year.

The number of hospitalisations did not exceed 2,000 during the peak of the epidemic in late 2020, but began to rise in late winter during the second wave.

Ukraine has only just started vaccinating its population after receiving its first batch of 500,000 Indian-made AstraZeneca shots last month, prioritising frontline healthcare workers and the military.

President Volodymyr Zelenskiy had a coronavirus vaccine shot during a visit with soldiers in the eastern Donbass region yesterday, hoping to reassure sceptics that the vaccine is safe and effective.

The government cited statistics showing that 47% of Ukrainians do not want the vaccine.