Covid-19 case numbers today fell to their lowest level since mid-December, while the number of patients in hospital dropped below 500 for the first time this year.

The Department of Health was notified of 14 further coronavirus-related deaths and 359 new cases.

In a statement, the National Public Health Emergency Team said that three of the deaths occurred in March, ten were in February and one in November.

It brings the total number of virus-related deaths to 4,333, while the the number of confirmed cases now stands at 220,630.

The number of Covid-19 patients in hospital is now 498, with 116 being treated in intensive care. 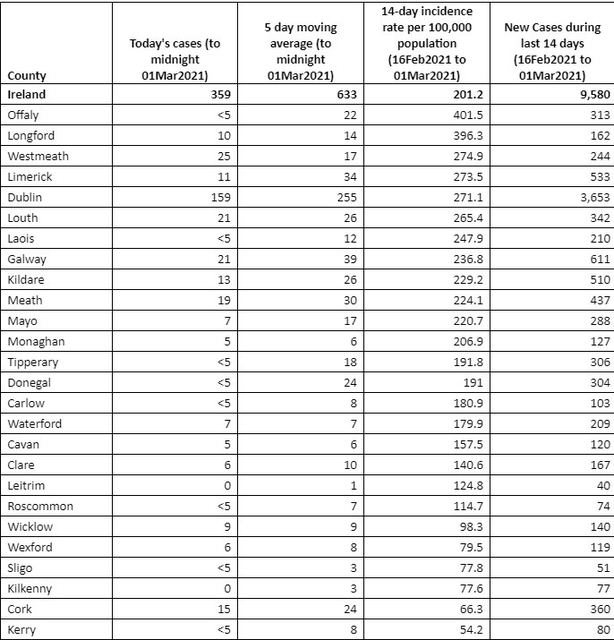 The Deputy Chief Medical Officer has said today's figures represents the lowest number of cases reported on a single day since mid-December.

"While we continue to make good progress in Ireland, globally in the past week, the number of cases of Covid-19 has increased for the first time in seven weeks. We must not allow this virus the opportunity to do the same here.

"Please hold firm to the public health advice and together we can continue to protect and build on the progress we have made over the last two months."

On 1 January, there were 508 Covid-19 patients in hospitals and the number rose during January to a peak of 2,020 cases on 18 January, the highest number seen in hospitals during any of the three waves in Ireland.

The number of patients with the disease in Intensive Care Units is also reducing slowly.

In late January, the peak of ICU cases during the pandemic was recorded at 221 patients.

It comes as the CEO of the HSE has said he expects the use of some 40 mass vaccination centres will be stepped up as we head into April, when he expects a vaccine supply of 250,000 a week.

He said the Taoiseach's announcement that 82% of adults will have received their first dose of the vaccine by the end of June, would have been based on the supplies of 1.2 million vaccines in Quarter 1 and 3.8 million in Quarter 2.

He said in Quarter 2, he would hope and expect that we can see an improvement in deliveries of vaccine from Pfizer or AstraZeneca.

He said they are always going to see some swings and roundabouts between suppliers of the vaccines, but "certainly in the Johnson one, it's not as significant at the supply levels for us".

He said they are continuing a recruitment campaign for vaccinators and "it's going really well" and that about 7,500 people have been trained, with many of them will be working in the vaccination centres.

He said while the vast majority of 85-year-olds will be vaccinated by the end of the week, they are also making progress on the next population grouping, which is the 80-84 age group.

He said they have put in supports for GPs, including a call centre and a dedicated email to place orders for the vaccine.

Meanwhile, the Chief Clinical Officer of the HSE has said that lockdown has caused real harm to children, especially young children and those with special needs.

Dr Colm Henry said that these children's education and development were affected by the lockdown, and he welcomed the reopening of schools.

Dr Henry said that a close eye would be kept on the case numbers, especially amongst teachers and pupils and but he hoped that we would see education continuing like it did from September to Christmas.

In response to a question on including teachers and gardaí in the vaccine rollout, Dr Henry said that if vaccines became available for everyone that they would begin with gardaí and teachers.

He hoped that 500,000 doses of the vaccine would be administered before the end of the week. It is a cause for optimism, he said, that the vaccines are being given to people as soon as they become available.

No Patrick's Day trips for ministers

Ministers will be staying home for St Patricks Day this year, due to the impact of Covid-19.

It is understood a series of virtual events will replace the usual ministerial visits in cities around the world.

Last month, it was confirmed that the traditional St Patrick's Day meeting between US President Joe Biden and Taoiseach Micheál Martin would take place virtually.

In 2020, the Cabinet approved a list of limited visits for ministers to key European and North American cities, only for most to be later cancelled.

Meanwhile, the provision of mandatory hotel quarantine was discussed at Cabinet today. It is expected the legislation will be brought to the President early next week.

If signed, the system of mandatory hotel quarantine will come into force, a spokesman said, "as soon as possible".

Government officials are continuing to hold discussions with potential providers about their facilities. A tendering process will apply.

Elsewhere, Northern Ireland's power-sharing Executive has published its plan to emerge from the Covid-19 lockdown.

More than one third of its adult population has now received a first dose of the coronavirus vaccine.