There is no evidence of "on-island transmission" of the new P1 variant of Covid-19 that was first detected in Brazil, according to the Director of the National Virus Reference Laboratory.

Last night the Department of Health confirmed that three cases of the variant have been confirmed in Ireland for the first time.The three cases are all directly associated with recent travel from Brazil.

He said the three cases were all part of the same cluster and the people had quarantined on their return before arranging for Covid tests to be done.

He said since their positive result for the variant, contact tracing has been ongoing.

Earlier the HSE's Chief Clinical Officer said the detection of the P1 variant is "worrying" and highlights the importance of people taking all the measures they can to halt transmission.

Speaking with Damien O'Reilly on RTÉ Radio 1, Dr Colm Henry said they have seen that mutations from the UK, Brazil and South Africa may lead to either increased transmissibility or they may alter the ability to fight the vaccine.

He said less is known about the strain first identified in Brazil than the strains detected in the UK and South Africa.

However, he said it shares a mutation with the South African strain so they can make certain predictions based on this knowledge.

"It may well be more transmissible. As to whether or not it is more resistant to the neutralising antibodies that is created by vaccines, we don't know yet.

"We know from the South African variant that shares some traits that it has a greater resistance but is still susceptible to vaccines. But of course it is worrying," Dr Henry said.

The Deputy Chief Medical Officer has appealed to anyone who has recently travelled from Brazil to phone any GP or any GP out-of-hours service to arrange a free Covid-19 test.

The researchers who first discovered the P1 strain in Brazil last month said it contains a unique constellation of mutations that could potentially make it spread more easily, affect the antibody response, and increase the risk of re-infection. 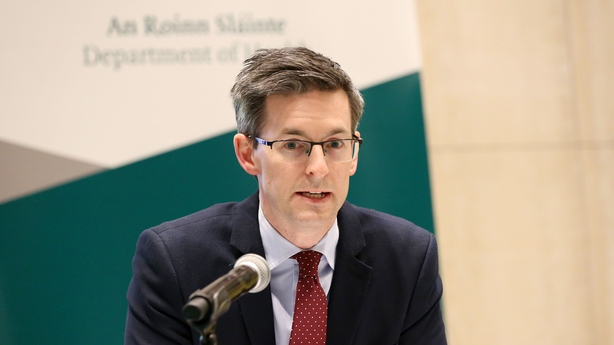 Dr Ronan Glynn said further studies are required to determine if the variant is likely to impact on vaccine effectiveness.

The unique range of genetic mutation includes one that causes its spike protein to attach more easily, and more firmly, to human cells, and another mutation that may enable it to evade the immunity antibodies generated by earlier infections.

Dr Glynn said anyone who has recently travelled from Brazil is required by law to quarantine at home for 14 days.

He said detection of the variant in Ireland does not change the fact that our best defense against all forms of Covid-19 is to stick with the public health measures that have proved so effective in reducing incidence of disease in our communities.

He added that we must continue to wash our hands well and often, wear a mask, cough and sneeze into our elbows, keep two-metres social distance from others and avoid crowds and always remember that it is imperative to phone your GP at the very first sign of Covid-19 symptoms.

What do we know about the P1 variant?

The P1 variant first emerged in the Amazon city of Manaus in northern Brazil in early December where a rapid new surge of Covid-19 infections took place.

This surge in cases occurred despite earlier estimates that as much as 76% of the city's population had already been infected with Covid-19 implying that the city ought to have already established so-called "herd immunity".

Their report concluded that "the recent emergence of variants with multiple shared mutations in spike raises concern about convergent evolution to a new phenotype, potentially associated with an increase in transmissibility or propensity for re-infection of individuals".
This new Brazilian P1 variant shares the N501Y spike protein mutation with the more highly transmissible B117 UK variant of the disease that now accounts for 90% of all new cases in Ireland despite not being detected here before late December.

N501Y is the mutation that enables the spike protein to bind more firmly to human cells and increases the rate of transmission of the virus.

The Brazilain variant also contains the E484K mutation detected in the B1351 variant from South Africa. This is sometimes referred to as an "escape" mutation because it can help the virus to evade the antibodies created by the immune system during earlier infections.

There is a fear that this mutation might increase the risk that a person could become infected with Covid-19 for a second time.

Dr Glynn underscored last night that further studies are required to determine whether this new variant is likely to have an impact on vaccine effectiveness or infection severity.