Everything hinges on the vaccine.

The reopening of the economy, travel, schools and the simple hope that normal life can resume sometime this year.

Politically, the stakes could not be higher for Taoiseach Micheál Martin, Minister for Health Stephen Donnelly and the entire Government.

But the success of the vaccination roll-out depends on three factors - supply, transparency and fairness.

Piecemeal announcements, moving targets and recent upsets have contributed to opposition accusations that the programme lacks the clarity needed to secure widespread support.

Ireland, like other EU countries, is off to a slow start as vital doses trickle into the country.

On supply, Ireland is constrained by its 1.11% proportionate share of the EU's agreements with pharmaceutical companies.

The European regulator has taken a cautious approach to approvals and manufacturers have experienced difficulties scaling up to match demand.

In terms of evaluating Ireland’s performance, a key criteria is whether the roll out is keeping pace with the supply.

And so far, the programme does seem to be getting jabs into arms at a similar speed to arrivals, according to HSE chief executive Paul Reid.

So it is supply that is tempering expectations and the coming week may even see a dip with limitations on doses of the Pfizer-BioNTech vaccine.

The Taoiseach has conceded that volumes will be small until April, but he also indicated that the ramp up will sorely test the vaccination programme.

Vaccination centres staffed by GPs and pharmacists will be opened across the country and this is where most of the population will get their injections. 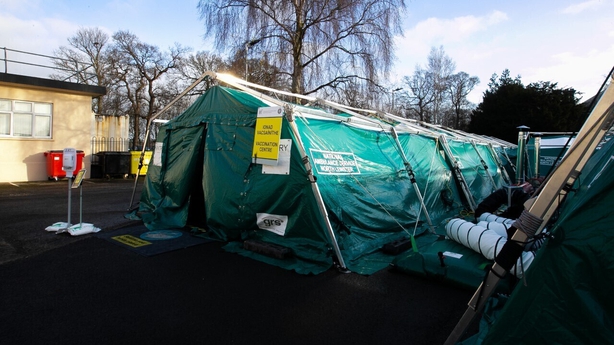 And the political challenge will be to ensure an efficient service which reaches everyone who wants to be vaccinated.

However, the programme currently lacks a transparent resource where people can check on the roll-out with daily updated figures on the total number of vaccinations, the recipients and the locations.

This has been promised but some opposition TDs have contested that it is being delayed until there is decent progress to report.

HSE managers have defended the limited information as being down to the lack of IT systems in some nursing homes allied to the fact that the overall IT system is not ready yet.

The Health Minister has now pledged that every adult could be vaccinated by September and that better timelines will be available when the "gamer changer" AstraZeneca vaccine arrives.

But even the plans to roll out that vaccine have been dealt a blow as AstraZeneca said it won't meet its delivery commitments. The Taoiseach yesterday said this was a "real problem" which will delay immunising the over-70s.

It has fallen to Junior Minister Ossian Smyth to draw up his own diagram setting out when most groups would get the jab.

Fairness is also key to securing mass buy in and engendering faith in the process.

This was damaged this week with revelations that three hospitals - the Coombe, the Rotunda and University Hospital Kerry - deviated from protocols.

While investigations are under way, both Minister Donnelly and Mr Reid summed it up by saying it was pretty obvious that family members in the Coombe should not be getting vaccinated ahead of frontline workers.

Labour’s Duncan Smith told the Dáil that confidence had been shaken by what emerged.

"My worry is that if the Government goes wrong here, resentment will breed and we will end up with some kind of Hunger Games feeling in the country in respect of the vaccine," he said.

And there are also broader questions around the fairness of the sequencing which is under way.

The National Immunisation Advisory Committee is making the key decisions on who gets vaccinated first.

However, the reality is that the buck stops with the Government as the sequencing was signed off by Cabinet.

So far, the prioritisation has thrown up plenty of anomalies aired in the Dáil. Why are family carers being treated differently to carers employed by the HSE?

What about children with underlying health conditions? TDs have been inundated with requests also from various sectoral workers dealing with the public who want to get in sooner.

Tánaiste Leo Varadkar said this week that this could be revisited once the three top groups are vaccinated, hopefully by the end of March.

But despite all the challenges, the vaccination programme also wields the promise of a significant political dividend if it's handled well.

Successfully steering the country out of the pandemic would be an undeniable victory and one that should lead to increased support.

And for a Taoiseach due to be at the helm until the end of next year, it could leave a historic legacy,if it goes well.