The World Health Organization has insisted that the international investigation into the Covid-19 pandemic's origins, set to start this week in China, was not looking for "somebody to blame".

WHO emergencies director Michael Ryan said the delayed mission - finally given the green light by the Chinese government - was about science, not politics.

Ten international experts will visit China from Thursday to probe the origins of the new coronavirus, more than a year after the pandemic began and amid accusations that Beijing has tried to thwart the investigation.

"Understanding the origins of disease is not about finding somebody to blame," Dr Ryan told a press conference in Geneva.

"It is about finding the scientific answers about the very important interface between the animal kingdom and the human kingdom.

"It is an absolute requirement that we understand that interface.

"We are looking for the answers here, not culprits and not people to blame."

Experts say solving the mystery of how the virus first jumped from animals to humans is crucial to preventing another pandemic.

The mission will visit Wuhan in China, where the first cluster of cases was detected in December 2019.

The WHO had expected the investigation to start last week but, to the UN health agency's surprise and disappointment with two members already on their way, Beijing suddenly announced a last-minute hold-up over entry permission.

Following the disruptions and intense scrutiny, WHO director general Tedros Adhanom Ghebreyesus has pleaded for the mission to be given the space to do its work.

China has reported its biggest daily increase in Covid-19 cases in over five months, the country's health authority said, as new infections in Hebei province surrounding Beijing continued to rise.

Though the recent case tallies remain a small fraction of what the country saw at the height of the outbreak in early 2020, authorities are moving aggressively to curb its spread to avoid another national wave of infections.

The rise in cases comes as the World Health Organization's team of investigators probing the origins of the pandemic are set to arrive in China on Thursday.

China has been accused of initially covering up the outbreak that first emerged in the central city of Wuhan in late 2019,which critics say delayed China's initial response and allowed Covid-19 to spread globally.

We welcome #China's announcement regarding the intl. team examining the origins of virus that causes #COVID19. We look forward to working closely with our 🇨🇳 counterparts on this critical mission to identify the virus source & its route of introduction to the human population.

The current wave of local cases first erupted in the port city of Dalian in Liaoning in mid-December. As winter advanced, other northern provinces - Heilongjiang, Hebei and Jilin - started to report more infections.

Dalian has blamed its outbreak on contaminated foreign vessels, saying the gene-sequencing information of the virus was different from that in previous outbreaks.

Most of the infected were dock workers handling cargoes from one ship from Russia, a Dalian official told reporters. 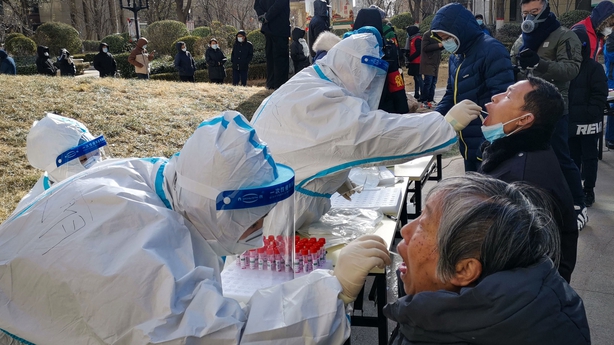 Shijiazhuang, Hebei's capital and the epicentre of the new outbreak in the province, is in lockdown. People and vehicles are being barred from leaving Shijiazhuang, while public transport in the city has also been halted.

The NHC reported 76 new asymptomatic cases for all of mainland China, up from 27 a day earlier. China does not count individuals who have tested positive for the coronavirus but are not showing symptoms as confirmed Covid-19 cases.

Dozens of students staged protests in central Rome today, urging the government to re-open the education sector across the country after most of its 20 regions extended closures to contain rising Covid-19 infections.

Italian schools reopened in mid-September after a six-month stop - the longest in Europe - but face-to-face lessons in secondary schools across the country were gradually suspended again a month later due to a new surge in cases.

Last week the government said secondary schools could restart at 50% capacity as of today but only four regions have re-opened. Most regional heads said it was too early and ordered that the return to classes be postponed by several weeks. 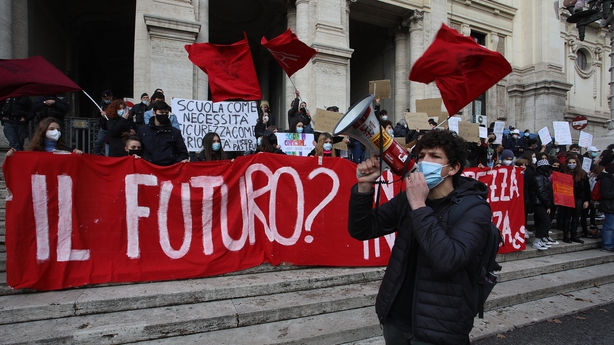 "I have done everything I could do, the schools are ready to start but the regions have the ability to reopen them or not," Education Minister Lucia Azzolina told state broadcaster RAI. "Distance learning is not working anymore."

Italy, the first western country to be hit by Covid-19, has reported over 78,700 coronavirus-related fatalities since the pandemic hit in February. It is the second-highest toll in Europe after Britain and the sixth-highest in the world.

After the Christmas holidays, Italy returned to a three-tier system which allows for different measures to be applied to different regions according to infection levels.

The remote Pacific nation of Micronesia has recorded its first case of Covid-19, ending its run as one of the few places on Earth without the coronavirus.

President David Panuelo acknowledged the development was "alarming" for the country's 100,000 inhabitants but said the case had been contained at the border.

"For this reason, citizens across the nation should remain calm," he said in a televised address.

"Do not panic because the situation is contained."

Mr Panuelo said the positive test came from a crewman on a government ship, which had been in the Philippines undergoing repairs.

He said the man and his colleagues remained on the vessel, which was anchored in a lagoon under round-the-clock surveillance.

Far-flung Pacific island nations have been among the most successful in the world at keeping out the virus after closing their borders early in response to the threat, despite the huge cost to tourism-reliant economies.

Vanuatu, the Solomon Islands, the Marshall Islands, Samoa and now Micronesia have lost their virus-free status, although none have so far reported community transmission.

The island nations and territories of Kiribati, Nauru, Palau, Tonga and Tuvalu are believed to still be free of the coronavirus.

The cautious approach adopted in the Pacific islands was prompted by fears they are particularly vulnerable because of poor hospital infrastructure and high rates of underlying health conditions such as obesity and heart disease.

Young women in colourful traditional clothes, masks and white stoles braved cold weather in lines and sat seats apart from one another in Yokohama to mark Japan's Coming of Age Day, even though the city is under a state of emergency.

The ceremonies were cancelled in many cities and parties were discouraged to stem a rise in Covid-19 infections.

On the second Monday in January every year, people who have turned or are about to turn 20 take part in ceremonies in local event halls or other large-scale venues to celebrate the rite of passage to adulthood.

The occasion, which is observed with a national holiday, serves in effect as class reunions for some and represents one of the major child-rearing milestones for parents.

Of Tokyo's 23 wards, all but one have cancelled or postponed the ceremonies, opting instead to offer mayors' congratulatory remarks online.

The government last week declared a state of emergency for the capital and three surrounding prefectures.

Participants wore face masks, had their temperature checks and were asked just to listen to the national anthem, instead of singing it out loud.

Japan has seen coronavirus cases total around 289,000, with 4,067 deaths, according to public broadcaster NHK.