Brazil has reported 60,091 new cases of the coronavirus and 1,261 deaths from the virus in the past 24 hours, the health ministry said.

Brazil has registered 3,224,876 cases of the virus since the pandemic began, while the official death toll from Covid-19 has risen to 105,463, according to ministry data.

Brazil ranks as the world's worst coronavirus outbreak after the United States.

Meanwhile, the country will require more information and talks before it commits to buying the Russian Covid-19 vaccine, which is at a very early stage, the acting health minister said.

With the world's second-worst coronavirus outbreak, Brazil has become a magnet for drug makers seeking partners to test their potential vaccines – and then produce and buy the successful candidates.

On Wednesday, a Brazilian technology institute said shortly after the state of Parana signed a memorandum of understanding with Moscow that it expects to produce the Russian vaccine by the second half of 2021.

Speaking with politicians, the health minister, Eduardo Pazeullo, said he took part in a video conference on Wednesday with representatives from national health regulator Anvisa, the Russian embassy in Brazil and the Parana government, but said the Russian vaccine was still at an early stage. 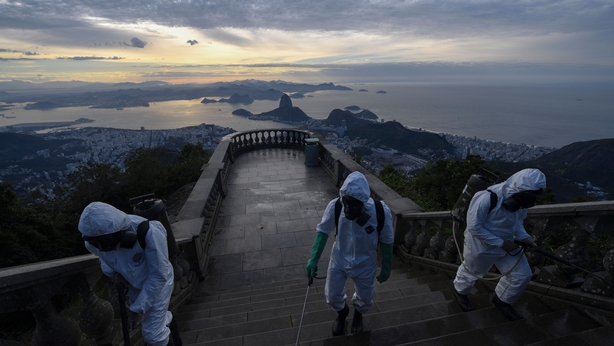 "It is just emerging," he said.

"We do not have depth in the answers, we are not able to monitor the data ... There will still be a lot of negotiation, a lot of work for this to be effective."

Nonetheless, he added that "we must also participate" if the Russian vaccine, which has faced scepticism from scientific experts due to a lack of test results, is shown to work.

At the moment, he said, the most promising vaccine is being developed by Oxford University researchers in partnership with the company Astra Zeneca.

Mexico, meanwhile, has surpassed half a million confirmed cases of Covid-19 after registering 7,371 new infections in 24 hours, authorities said.

Russia reported 5,065 new cases, bringing its nationwide tally to 912,823, the fourth highest caseload in the world.

Elsewhere, Spain has said that it was closing discos and banning smoking in the street without social distancing, as it stepped up restrictions to stop the spread of Covid-19.

The country's health minister unveiled a raft of new measures to be enforced nationwide after as the country battles a surge in the disease, with nearly 3,000 new cases in 24 hours reported yesterday.

In a bid to rein in the spread of the virus, discos, night clubs and dancing halls will be shut, restaurants and bars will be required to close by 1am, with no new guests allowed in from midnight.

The ban on smoking on the street - which is in line with World Health Organization recommendations - is already in place in two of Spain's 17 autonomous regions, Galicia and the Canary Islands.

In retirement homes, visits will be limited and all new residents must be tested for the virus when they are admitted.

Regional authorities will be required to carry out testing among groups of the population that are particularly at risk, and in the built-up areas hard hit by the disease, but the health ministry gave no timetable for these measures to come into force.

North Korea says it has lifted a three-week lockdown that was imposed on a border city after a defector believed to be carrying the coronavirus sneaked back into the country.

The secretive nation has insisted it has had no cases of Covid-19, a claim international experts say is unlikely, given the spread of the disease around the world.

Authorities in July said they were imposing a lockdown on Kaesong city when a 24-year-old man, arrested after crossing the heavily fortified border from the South, was found to be displaying symptoms of the coronavirus.

"It has been proved the situation of anti-epidemic work has been kept and controlled stably", Leader Kim Jong-un was quoted as saying by the state-run KCNA news agency.

Mr Kim "expressed thanks ... to the people in the locked-down area for having remained faithful to the measures taken by our Party and government, despite the inconvenience in their living under quarantine".

North Korea's medical infrastructure is seen as woefully inadequate for dealing with any large-scale outbreak.

Pyongyang closed its borders in late January, the first country in the world to do so, in a bid to protect itself against the coronavirus.

It imposed tough restrictions that put thousands of people into isolation, but analysts say the country is unlikely to have avoided the contagion.