Four million residents of Barcelona have been urged to stay at home as virus cases rise, while EU leaders meet again in Brussels, seeking to rescue Europe's economy from the ravages of the pandemic.

Spain's Covid-19 death toll of 28,400 is one of Europe's worst and the country has identified more than 150 new virus clusters across the country.

Barcelona, one of Europe's most visited cities, warned of a potential return to lockdown as EU leaders met and as India became the third country to record one million cases after the United States and Brazil.

"With all this news there will only be cancellations," Joan Bernat, a restaurateur in the city told AFP.

Trade "was already going badly these past few weeks - there's nobody in the offices, no tourists". 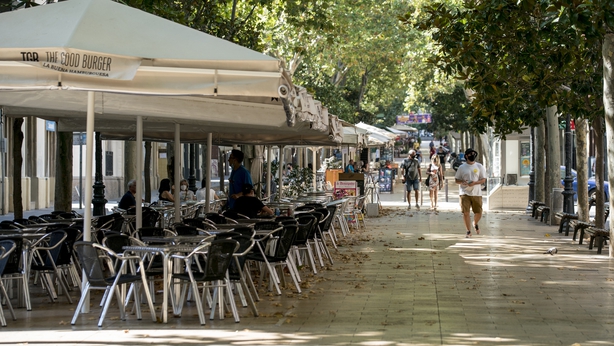 The virus has now killed more than 594,000 people and infected over 13,990,000 as it continues to surge across the globe despite months of unprecedented lockdowns to stop its spread.

A growing number of countries and cities have been forced into reimposing restrictions, with Barcelona only the latest example.

India hit the million mark the day after virus cases in Brazil topped two million - although the World Health Organization said that Brazil's contagion has "plateaued" with the rate of infection stabilising after 77,000 deaths.

The Group of 20 in April agreed to a one-year moratorium to help the world's 76 most vulnerable economies but Ms Reinhart said the step hasn't "gone as far as it was hoped".

The International Monetary Fund warned meanwhile that the United States, with more than 3,640,000 cases, must do more to support households and boost demand after GDP contracted 37% in the second quarter.

The IMF warned "tremendous uncertainties" hang over the country's outlook.

"The sooner we put this down, the sooner we're going to get back to normal and you'll be able to freely have fun, go to the bars go with the crowds, but not now. Now is not the time to do that," he said.

The United States marked a record number of coronavirus cases for the third consecutive day yesterday, notching more than 77,600 new infections in 24 hours, according to a tally by Johns Hopkins University.

Lockdowns have been imposed on millions of people in India, where more than 600 are dying every day.

India's hotspots had previously been the megacities of Mumbai and Delhi, but smaller cities and rural areas - where 70% of Indians live - have recently begun to raise the alarm. With per capita spending on health care among the lowest in the world, India's hospitals are reeling.

"It's not going to go away till a vaccine comes... I have to keep fighting and trying to save every single life," a doctor in an intensive care unit outside the capital, Delhi, told AFP.

Despite fears of a second wave, British Prime Minister Boris Johnson said his country could expect to return to "significant normality" by Christmas, as a study revealed that Europe's hardest-hit nation may be overestimating its death toll.

However, Israel said stores, markets and other public spaces would be closed on weekends as its number of cases surges.

In China - where Covid-19 first emerged late last year -- flights were curtailed and public transport shut down in Urumqi, the capital of the far-western Xinjiang region, after new infections were detected.

Authorities in Australia's second-biggest city Melbourne meanwhile warned that its lockdown could become even tougher after a record 423 new cases were registered there yesterday.

Iran's President Hassan Rouhani said that 25 million Iranians have been infected with the coronavirus and that another 35 million are at risk of acquiring it.

The figures, which Mr Rouhani said were based on a new Health Ministry report, are far higher Iran’s official toll of 269,440 infected. The president in a televised speech did not address the discrepancy.

Iran, with a population of more than 80 million, has been the Middle East country hardest hit by the epidemic.

"Our estimate is that as of now 25 million Iranians have been infected with this virus and about 14,000 have lost their dear lives," Mr Rouhani said in the speech.

"There is the possibility that between 30 and 35 million other people will be at risk," he said.

The health ministry yesterday said 13,791 people had died from Covid-19.