It can be very tricky to compare the Covid-19 experiences of different countries. Populations are not evenly distributed in terms of age, location, ethnicity, social class, or culture. Different groups and regions are not equally susceptible to the virus.

Then there is the fact that countries measure the impact of the coronavirus differently. For instance, Ireland is one of only a very small number of European countries that includes both nursing homes and suspected or probable Covid-19 cases in official numbers.

This doesn't stop people making international comparisons though. With so many people straining at the leash to break out of lockdown, many point to the different experience in Sweden with no lockdown. It raises questions about whether Ireland’s social, travel, and work restrictions needed to be so tough here after all.

For anyone who asks that question of Chief Medical Officer Dr Tony Holohan, he has a very sharp and succinct answer: "Have you seen the intensive care admissions figures for Sweden?"

Well actually, no, not really. We haven’t seen those figures. Sweden’s ICU caseload is hardly headline news here. Perhaps it should be. Because there is something important that Sweden’s critical care experience can tell us. It is this: there never was any realistic alternative strategy that Ireland could have pursued.

Our healthcare system simply could not have coped with the more relaxed approach taken by Sweden. This graph showing the number of people treated in intensive care in Ireland and in Sweden shows why. 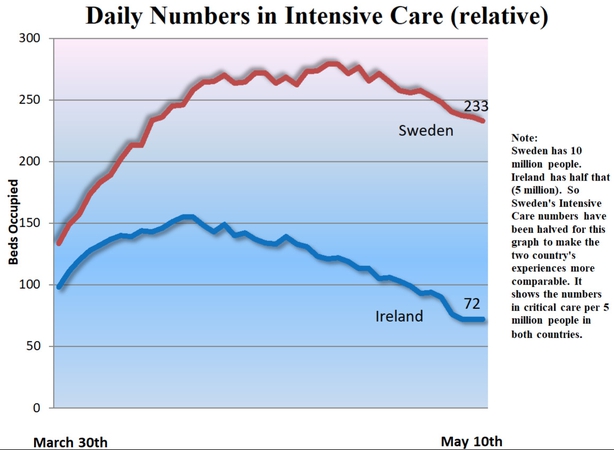 There are two striking observations about the graph. The first is that the underlying level of Covid-19 disease in Sweden, as evidenced by the numbers in intensive care, is running very significantly above the levels of disease in Ireland and has been doing so since the start.

In fact, the level of disease in Sweden is three times higher than in Ireland if the ICU occupancy rates are any guide. If anything, the gap between both countries appears to be widening, as Ireland continues to strangle the spread of the virus by retaining the lockdown while Sweden pursues its more relaxed approach.

The second striking observation is that while the number of confirmed Covid-19 cases in intensive care in Ireland was down to 72 by 10 May, on a like-for-like basis the number for Sweden was 233. That is more than three times the level of disease in Ireland.

This is a huge gap. It suggests that if Ireland had followed the Swedish more relaxed approach to social distancing, we would have required at least another 161 beds in intensive care for confirmed Covid-19 patients alone.

Add to that the additional beds required for three times as many "presumed or suspected" Covid-19 cases - which have always been a significant and constant feature in intensive care. The number of extra beds required for Covid-19 patients would then be above 200 by now.

We just do not have that capacity in intensive care. Notwithstanding the issue about where in the country those vacant beds might have been required, by 10 May we could accommodate, at a push, about 150 additional patients in fully-staffed ICU beds nationwide. 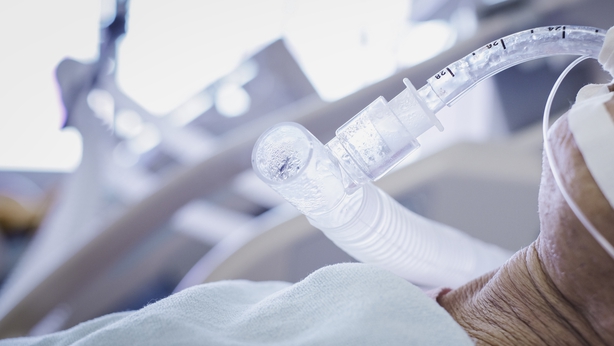 Before this crisis began, Ireland only had about 225 intensive care beds nationally. By 10 May, including non-Covid-19 patients, there were 257 people receiving critical care in Irish hospitals. That means even with the lockdown, if the HSE had not scrambled to expand critical care capacity, hospitals in Ireland would have been in serious trouble by now with medics having to make torturous decisions about who to allow into critical care units and who to turn away.

Our health system could not have coped. Fortunately, that did not happen because of the extra critical care capacity that was put in place.

But what if our National Public Health Emergency Team had advised the Government to follow the Swedes? What if the level of Covid-19 illness was more than three times as high in Ireland as it is now? Because that is precisely what the Swedish intensive care numbers tell us would have happened.

It would have been a disaster. It would have put Ireland right up there with Italy and Spain, in terms of the horrific scenes and experiences that we would have had to endure and witness. The European Centre for Disease Control highlighted that Ireland started into the crisis with the lowest number of intensive care beds per capita in Europe.

Our healthcare system was simply never strong enough to endure the journey that the Swedes embarked on. It just could not have coped and it is hard to imagine how Irish society would have coped.

In an interview with the Financial Times last Friday, Sweden's state epidemiologist Anders Tegnell, who masterminded Sweden's no-lockdown approach, claimed his country will have an advantage over other countries in the autumn. That is when he expects a second wave of coronavirus to hit.

Mr Tegnell says that a very high proportion of Sweden’s population, particularly in Stockholm, will have had the virus by then and so have developed some form of immunity. That will bring Sweden closer to so-called herd immunity, which is quite a horrible term when you consider we are talking about real people and the sickness, anguish, fear and grief many have to suffer to achieve such immunity.

Here, however, Chief Medical Officer Dr Holohan makes it very clear at his press briefings that Ireland is not going to go for herd immunity. He also makes no bones about the fact that he is going to be very cautious and conservative (his words) when it comes to easing social restrictions - the polar opposite of his Swedish counterpart.

All the signs suggest that there is likely to be nothing coming from the Covid-19 numbers in Sweden that will cause him to change his mind.

1. The numbers in the graph for Ireland come from the HSE’s Covid-19 Daily Operations Update of Acute Hospitals. The numbers for Sweden are published daily on the Swedish Intensive Care Registry. But since Sweden has twice the population that Ireland has, 10 million people versus 5m here, the Swedish ICU daily total has been divided in two so that the graph shows the numbers receiving critical care for Covid-19 per 5m people in both countries.

2. Crude official figures show that Sweden, with double the population of Ireland, has 2.2 times the number of Covid-19 deaths, suggesting at first glance that Ireland and Sweden might be neck and neck in the international coronavirus league tables.

3. Sweden's numbers don't include "presumed or suspected" Covid-19 cases either. They are included in Ireland.

4. The level of admission to intensive care is a key international comparator for the underlying level of disease, accounting for about 2.4% of all diagnosed cases according to the European Centre for Disease Control.

5. In Sweden, most primary and secondary schools are still open. So too are restaurants, cafes and shops. Gatherings have to be greater than 50 people before they are banned. It is left to people themselves to voluntarily engage in social distancing, while working from home is a choice that is encouraged rather than enforced.