Of the additional deaths, 92% came about due to Covid-19.

The census was conducted almost two weeks ago on behalf of the National Public Health Emergency Team led by the Chief Medical Officer, Dr Tony Holohan.

It found the total number of deaths that occurred in nursing homes and in residential facilities for people with disabilities during that four-week period was 1,232.

This was more than double the number of deaths that occurred last year.

A total of 586 people who died in those care facilities during that period died as a result of Covid-19.

This included those whose infections had been confirmed by a laboratory analysis, as well as those deemed by their physician to have been probable or suspected Covid-19 deaths. 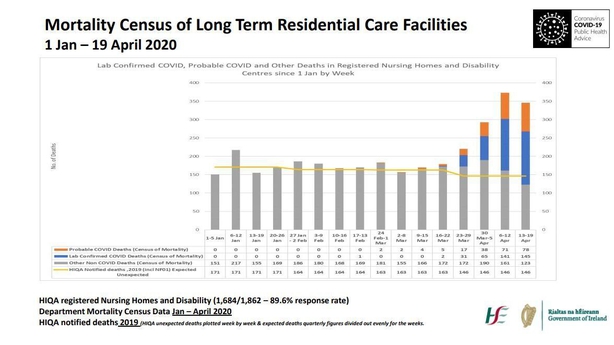 The census of Long-Term Residential Care Facilities covered all deaths between 1 January and 19 April.

When responses from mental health facilities, including multiple responses from houses in the community were added in, the census found that a total of 3,368 people had died from all causes in Long-Term Residential Care Facilities since the start of January. 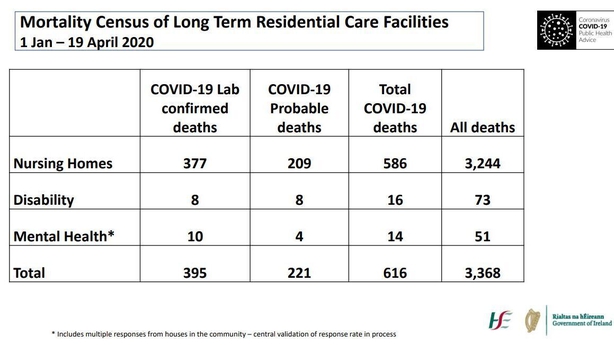 Residents in mental health care facilities made up the remaining 1.5% of total deaths.

Out of the 616 people who have died from Covid-19 in the long-term residential care facilities covered by the census since the start of January, 95% - or 586 people - were residents of nursing homes.

Another 16 people in residential care facilities for those with disabilities also died from the virus.

Meanwhile, the deaths of 14 residents in mental health care facilities were also caused by the virus according to the census.