The Galway-based World Marathon Challenge champion got a hero's welcome on his return to work at a national school in the city today.

Gary Thornton arrived back in Ireland earlier this week after winning seven marathon races in seven days in seven locations around the world.

The 38-year-old, who teaches senior infants at Claddagh National School, showcased his medals and spoke to children at a special event this afternoon. 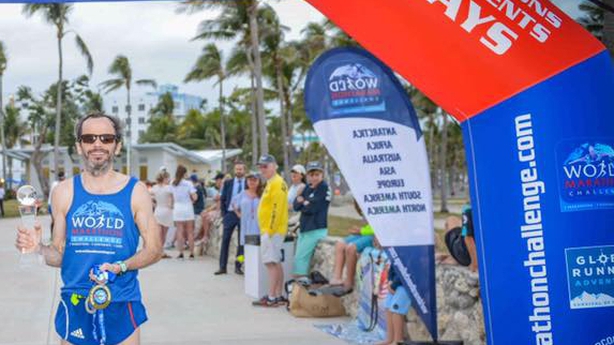 The World Marathon Challenge is an annual event that draws competitors from around the globe. Mr Thornton completed each race in a time of around three hours.

In a letter of congratulations, President Michael D Higgins commended him on his achievement and said he hoped the accolade would inspire others to take up sport of overcome challenges they were facing in life.

School Principal Michael Gallagher said the effort he had put in was an inspiration to staff and pupils alike.

Mr Thornton is a regular sight on the streets of Galway, as he pounds the pavements for his daily training regime.

He said he had approached each race with a singular focus and tried hard not to let the hectic travel schedule interfere with his mindset.

The runner travelled a total of 57,850kms flying between the various race destinations.

He said he hoped that children in the school and further afield might look to his success and see that with application they too could achieve whatever goals they set themselves.