Savers have been waiting a very long time for their moment in the sun.

For much of the last decade, as interest rates languished at rock bottom, they saw their deposits making a return of next to nothing.

Indeed, in more recent times, inflation has started chipping away at their cash piles, effectively making them worth less and less every day.

So, they must have been relieved at the prospect of interest rates rising across the euro zone.

Finally, the chance to once again generate a return on their hard-earned savings.

However, it hasn't quite turned out that way and the bounty that they might have been expecting on their cash pile has yet to show any signs of materialising.

The financial crisis had a long-lasting effect on sentiment in Europe and elsewhere.

With households and businesses making strides to pay down debts, they were on the whole reluctant to take on new debt.

It prompted Central Banks globally to launch a grand experiment of essentially printing cash - known as Quantitative Easing - and dropping interest rates to zero - or lower - to entice people to borrow money.

In a further attempt at convincing people to part with their cash, and banks to lend out their excess deposits, the European Central Bank cut its own deposit rate - that which it pays banks for parking their excess cash with them - into negative territory.

This era of negative interest rates saw the banks effectively paying the ECB for that deposit facility.

Latterly, the banks here started to pass that on to their customers, but only those with very large deposits, such as businesses and individuals with deposits in excess of €1 million, for example.

A swift end to negative rates

The negative interest rate era came to a full stop in July when the European Central Bank raised rates for the first time in over a decade by a full half a percentage point, bringing the deposit rate back to zero in one swift move.

It has since raised rates by a further 1.5% and another increase of at least half a percent is expected when the ECB's policy committee convenes again next month.

That would see the ECB's borrowing rate rising to 2.5% and the deposit rate edging up to 2% - all in the space of half a year.

Savers were finally eyeing the prospect of a reward for their efforts.

Although the European Central Bank has moved fairly swiftly - albeit late in the day compared to its global counterparts - the main banks here have been slow to pass on the rate hikes.

All three of the remaining bank lenders in the market have of late announced hikes in the cost of borrowing, with AIB moving for a second time this week, but the increases haven't matched the extent of the increases introduced by the ECB.

In fact, mortgage pricing here - for long among the most expensive in Europe - has moved back in line with the euro zone average as banks across Europe raised their pricing in a swifter fashion.

On the flipside, deposit rates have also not increased to any great extent.

According to data from the Central Bank last week, the average interest rate on new household term deposits was 0.17% in September.

What's more, the yield here is subject to Deposit Interest Retention Tax (DIRT) of 33%, shaving close to €6 off that return.

On the bright side, that 0.17% return represented an increase of 11 basis points (0.11%) on what was offered by the banks in the previous month indicating that the situation is at least starting to move back in the saver's favour.

But it's a woeful offering when the ECB deposit rate is already at 1.5%.

"It highlights the particular abundance of liquidity in the shrinking Irish market," John Cronin, Financials Analyst at Goodbody wrote in a note to clients.

In other words, the banks have more than enough money from depositors which is being added to by consumers moving banks as KBC and Ulster Bank depart the market.

And they're doing quite well from it.

All three of the remaining bank lenders here have increased their outlook for interest income for the full year.

This comes mainly from the wall of deposits that they're able to make money from by lending out to borrowers, but also by parking some of it with the ECB where they're now once again getting a return.

"Until you've got an appetite for money, when you're flush with it, why would you pay out?" he asked in reference to the low rates currently being offered by banks on deposits.

Mr Conway pointed out there hasn't exactly been any public outcry for the situation to change.

"People prefer the idea of security rather than chasing yield right now. As long as consumers aren't demanding it, competition isn't providing it, so yields will stay low for quite some time," he suggested.

We have always had something of a savings culture in this country.

That habit was turbo-charged during the pandemic when, in the absence of opportunity to spend money, those who were lucky enough to be able to continue in employment put aside large amounts of cash.

At the same time, the volume of outstanding loans fell as people used some of that excess cash to pay down debts.

It left the banks with a lot more deposits than loans. According to figures from the Central Bank, at the end of May this year, total household deposits stood at €144 billion - 30% higher than at the onset of the pandemic.

Some credit unions actually stopped accepting deposits and placed restrictions on the level of savings that they would take from individual members. 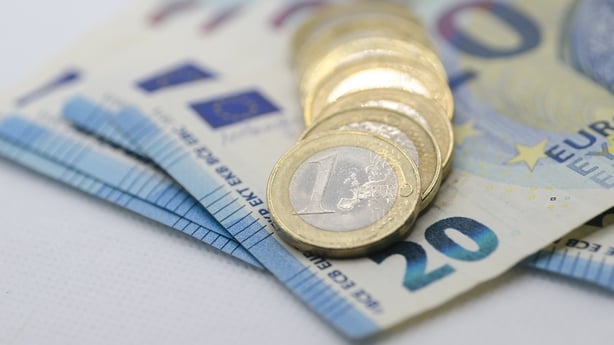 Although we are continuing to save, there are suggestions that we're cutting back quite a bit on how much money we are putting aside.

According to an analysis by the comparison website Finder.com, Ireland is expected to see the biggest drop in savings among OECD countries from in excess of 20% in 2020 to just 7% this year.

That amounts to over €4,500 less than the average householder's savings in 2020.

That points to further growth in deposits but if inflation continues to rise, it will eat away at the value of that money.

Together with some loosening of the purse strings and increased demand for credit, the banks will inevitably welcome deposits at some point in the future when they'll likely offer greater inducements to get them.

That could be quite some distance away though.

Where is the best return to be found right now?

If putting cash on deposit, the best return is typically gained by locking the money away for a period of time.

Permanent TSB announced a new product in recent weeks offering 1.25% on lump sums of €5,000 and higher for a period of 5 years.

That would generate a return over that period of at best a few hundred euro which would then be subject to DIRT at 33%.

For those depositing in regular accounts with the option of ready access to their cash, the returns are still negligible.

Frank Conway points out that, in the current inflationary environment - with prices rising at an annual pace of 10% - savings are being eroded at a ferocious rate.

"That's a big chunk of buying power lost. And that's when inflation is at 2%."

Mr Conway suggested that, once people have enough set aside for a 'rainy-day fund', they should look at investment products, such as a fund that tracks the S&P index or consider putting it into a pension.

"Ireland has a particularly good pensions landscape, because it's tax free and has tax-free growth," he explained.

He acknowledged that pensions carry risk around market performance and there are management fees that can be steep.

On the whole, though, it's a better use of spare cash right now than leaving it sitting in a bank account to devalue by the day as inflation continues to soar and shows no sign of tapering off.