One swallow doesn't make a summer, it is said.

And in the world of economics, one set of monthly figures certainly doesn’t make a trend.

With the annual rate coming in at 9.1%, the same as the previous month, have runaway rising costs in Ireland now peaked?

Context, though, is everything.

Regardless of whether inflation has or has not topped out, we shouldn’t lose sight of the fact that at 9.1% the rate at which the cost of living is rising remains at a 38-year high.

So peak or no peak, it is extremely elevated and will remain so for some time to come.

We also need to remember the complicating factor of "base-effects".

When it comes to judging how rapidly or not the cost of living is increasing, percentages don’t tell the whole story.

Because much depends on the base that the inflation is being measured from.

Peak or no peak, inflation is extremely elevated and will remain so for some time to come

But to understand the true change, we really need to look at actual price levels at the point against which they are compared – in this case July 2021.

And back then we were still feeling the stifling effects of the pandemic, with reduced demand having an artificially suppressing effect on some prices.

This could be skewing the data somewhat – it’s not entirely clear or to what extent. 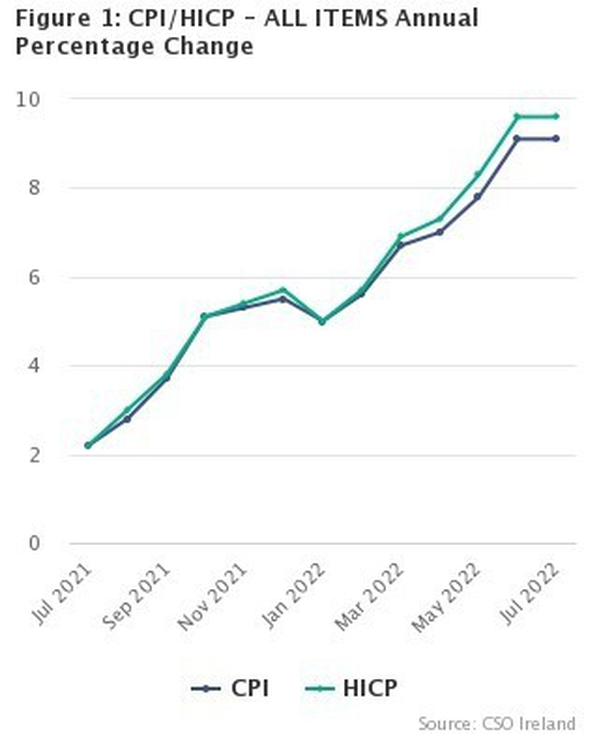 But with all that firmly in mind, can we say with any confidence that we have reached the top of this particular inflationary cycle that’s causing so much hardship for so many?

According to Gerard Brady, chief economist with employers’ organisation Ibec, it is too early to tell.

There’s really one reason for this and that’s energy.

It is currently the big driver of inflation across nearly all sectors of the economy at the moment, particularly food and transport.

Indeed when you exclude its effects inflation is actually running at a bit more modest 5.9%.

It remains unclear what’s going to happen next to energy prices.

Oil prices have softened a little in recent weeks on weaker global demand due to fears of recession and this may have contributed to today’s static inflation figure.

But the worry is that if Russia continues to squeeze gas supply into Europe and elsewhere, energy prices may once again soar higher.

"We’re still in a period of huge uncertainty through the winter and we might not have seen the peak yet," Mr Brady said.

"If flows of gas continue to come into Europe on the basis that they are coming you could see some kind of normalisation and things start to ease a small bit, because base effects knock out," he said.

"But if there are ongoing tensions and Russia continues to reduce gas supplies, Europe could actually see the numbers hold up well through the winter," he added.

The other factor is that because of seasonality we aren’t using as much energy right now as we will in the coming months, but once we get into October and November, that will all change.

Ibec has forecast that inflation will peak between 9-9.5% sometime over the next two months and average out at 7.5% for the year.

It would be foolish to think the worst has passed

But the Central Bank has predicted it could hit double digits before year end before falling back, averaging out at 7.8% for the year as a whole.

There are of course other factors which could influence a further upward trajectory in prices – one big one being wages.

So far earnings growth in the economy has been relatively controlled, despite many unions and employee representative bodies clamouring for wage increases to offset the rising cost of living.

In the year to the end of March, average weekly earnings were up just 2.3%.

But were that to change - and we can expect it will to some extent or another - then we could find ourselves in the grips of a wage-price spiral, with people seeking earnings that chase soaring prices.

Housing is also having an impact on inflation and when it is excluded the annual rate falls to 9%.

Almost every day we hear more bad news about the availability of houses to rent and buy, and this worsening situation coupled with rising mortgage rates over the coming months will certainly push housing costs higher.

The reality, therefore, is that while today’s inflation numbers may spark a tiny bit of optimism, it would be foolish to think the worst has passed or even that it is passing.

Indeed, it’s more likely that the summer swallows will have long flown towards southern Africa before we know if the inflation challenge has eased.