However, new figures from the Irish Tourism Industry Confederation (ITIC) show that visitor numbers were still down 11% in July compared to the same month in 2019 - before the pandemic.

The data shows that so far this year, visitor numbers are down 24% when compared to the first seven months of 2019.

The ITIC, which represents accommodation providers, attractions, tourism operators, restaurateurs and pubs, said Ireland’s competitiveness is "under threat", stating that input costs and prices are rising faster than the European average.

"Ireland is an expensive country to operate a tourism and hospitality business," said Eoghan O’Mara Walsh, CEO of ITIC.

"I don't think that is reflective of the broader industry, and I don't think it puts the industry in a good light," he said.

"There are 20,000 tourism and hospitality businesses in the country and the vast majority are SMEs up and down the length and breadth of the country - all labour intensive businesses, all modest profit margins and think most still over good value for money," he added.

Mr O'Mara Walsh said he believes the article was unfair.

"I think Dublin has a really strong tourism offering," he said.

Despite operational challenges and labour shortages, today’s data reveals strong demand during the month of July.

Visitors from Continental Europe performed most strongly - down 7% on 2019, while the key North American market showed improvement with 268,000 visitors. 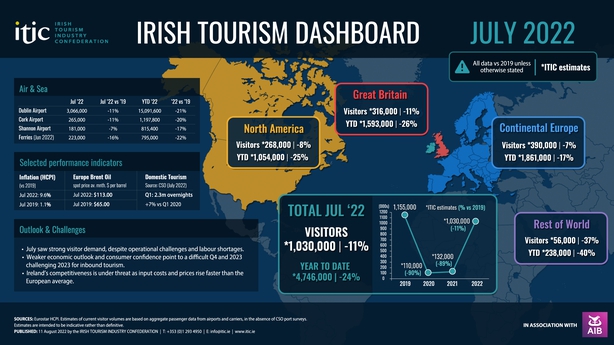 The ITIC has warned that the upcoming budget will be "vital" in supporting the sector's competitiveness.

However, a report published yesterday by the Department of Finance, which sets out options for the upcoming budget, suggests that the 9% VAT rate for the tourism and hospitality sector will not be extended beyond next March.

"I think if the VAT rate rose it would add to inflation which is in nobody's interests, but also it would depress demand and damage the recovery of the sector - and ultimately it would lead to increased prices," he added.

Elaina Fitzgerald Kane, Chairperson of the ITIC and former president of the Irish Hotels Federation said there is growing uncertainty within the industry.

"A myriad of factors have boosted this summer," she said.

"However our members are worried about later this year and into next year with extraordinary inflationary pressures and capacity constraints including around the availability of people," she added.

The ITIC said the weaker economic outlook and lower consumer confidence points to a difficult fourth quarter for the sector, and a challenging 2023 for inbound tourism.

It added that it does not expect to see a full recovery across the sector until 2026.