Businesses are passing on rising costs to their customers, according to a slew of data published this week, but is there a limit to consumers' spending power?

Service providers hiked charges at record rate in April read the headline on Thursday reporting the latest AIB Purchasing Managers' Index for the sector which showed that one in three firms raised their prices last month.

It was notable given that the services sector accounts for over half of activity in the economy and covers areas as diverse as tourism and travel, financial and business services, and media and telecommunications.

On the same day, the chief executive of the Restaurants Association of Ireland was on Today with Claire Byrne discussing the rising costs for restaurants and calling on the Government to maintain the VAT rate for the sector at 9%.

"The price of chicken into restaurants is now 35% more than it was at the time that the minister made his statement (on raising the rate to 13.5% from September)," said Adrian Cummins.

"We thought we were going to have the economic bounce post-Covid. We haven't seen that because of the Ukrainian war," he said. "Our input costs are rising by the day."

"With many household budgets under severe strain this year, it’s certainly the case that any double-digit increases in all but the most basic of necessities is likely to see demand curtailed by more than the price rise, meaning consumers will spend less in these areas and revenues will fall for those firms."

Another Purchasing Managers Index published on Tuesday, this time on Irish manufacturing, showed that the rising costs of energy and raw materials are forcing most manufacturers to continue increasing their own prices, passing them on to customers.

One industry forced to absorb rising costs is construction and firms working on public projects. Input costs have been rising since May 2020, driven primarily by Brexit, Covid, public health measures and now the war in Ukraine.

"All of these events were beyond the control of the contractor and could not have been reasonably foreseen when projects were being priced," said Paul Sheridan, CIF Director of Main Contracting.

"Because Ireland does not use standard international forms of contract the contractor has been forced to absorb all of these cost increases.

While the taxpayer has not had to pay the rising costs for these public projects, society might end up paying a much higher price.

"This is unsustainable and is causing long-term systematic damage to the industry, which is highly likely to have a negative impact on the delivery of the National Development Plan, housing for all employment in the sector," Mr Sheridan warned. 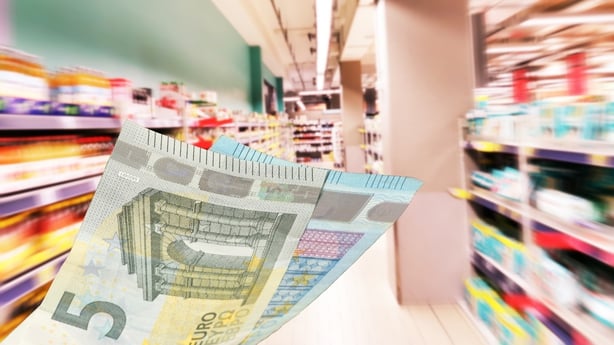 The average household is facing a €330 price increase on their annual grocery bill, according to figures from consulting company Kantar, published on Tuesday.

It found that 23% of households are now struggling to make ends meet when it comes to their weekly food shop.

Foods like cooked poultry, bread, pasta, and butter have seen some of the biggest jumps in recent months.

Is it sustainable for businesses to continue passing on rising costs to consumers? Or will businesses meet price resistance from customers?

"Retailers were absorbing costs before," according to Duncan Graham, Managing Director of Retail Excellence, "but I think as this year has gone by, it has become extremely difficult to continue to do that and they have been passing on some of those costs to consumers.

"Retailers have been hit across the board between rising overhead costs, raw materials and staffing. It's a perfect storm that's happening at the moment."

Austin Hughes, Chief Economist with KBC Bank Ireland, estimates that average incomes will fall by around 2% in 'real' or inflation adjusted terms. "For some better-off consumers that may mean reduced savings or some cutbacks on ‘discretionary spend. For many other consumers, a sharper adjustment will be required."

Economic theory suggests that the extent of ‘price resistance’ by consumers depends on whether the good or service is a necessity or not and whether there are close substitutes, Mr Hughes said.

"In reality, even for necessities such as food or energy, consumers will pull back spending somewhat. So, firms will suffer from a double-whammy of higher costs and reduced sales."

However, the degree of pull-back varies hugely from item to item. Even if many of us are walking or cycling more, traffic volumes remain high because most consumers need to use their cars and can't avoid paying the higher prices at the pumps.

The price of oil is also pushing up air fares.

"When fuel price goes up it is inevitable eventually that will be passed through to customers," said Lynne Embleton, Chief Executive of Aer Lingus, on Friday.

A flight is often a discretionary spend, but the CEO claimed the airline still has low fares and expects to reach 90% of 2019 capacity at peak. "But ultimately we do see fuel costs needing to be reflected in price," she added.

For other goods and services, the pushback is likely to come at much lower price points. A special question in the KBC consumer sentiment survey for March found that 85% of consumers planned to cut back on their spending.

While food is a necessity, producers tend to meet some element of price resistance fast. The KBC Chief Economist said, "More generally, intense competition between retailers and the increasing influence of ‘own brand’ goods are also factors that make it possible for consumers to avoid extreme price hikes in many grocery areas."

Retail Excellence's Duncan Graham agrees. " I don't think people will stop spending, but they may slow down in spending, and might buy more 'own brand' products."

He said figures for Q1 compared to Q1 in 2019, "but it could be a different story altogether in Q3 and Q4. It's in the lap of the gods at the moment."

Between 2012 and 2021, Irish inflation averaged just 0.6% per annum so most consumers were not focussed on price increases.

Now almost all consumers are likely to be extremely price conscious, and this is hugely assisted by checking and comparing prices online. Mr Hughes said these conditions have set up a buying climate in which "both firms and consumers have to be careful and/or crafty when it comes to price increases and purchases".

"With the prices of necessities climbing fast, some businesses may find they have little or no pricing power and even modest increases in the prices of more ‘discretionary’ goods or services could lead to a marked fall-off in sales particularly from altogether more price conscious consumers."

Mr Graham said he thinks the retailers that will struggle are the retailers that did well during the pandemic like homewares and furniture. People couldn't spend their money on holidays, and many spent it instead decorating their homes because they were spending more time there. "And now, money saved during the pandemic is now being eked away by rising costs," he added.

"There isn’t a magic number that consumers might deem an ‘acceptable’ scale of price increase," said Mr Hughes. "With many household budgets under severe strain this year, it’s certainly the case that any double-digit increases in all but the most basic of necessities is likely to see demand curtailed by more than the price rise, meaning consumers will spend less in these areas and revenues will fall for those firms."