New figures from the Central Statistics Office show that one in four households - with children - were in arrears on their utility bills on at least one occasion last year.

The CSO's Survey on Income and Living Conditions (SILC) for 2021 also shows that 42% of households said they had at least some difficulty in making ends meet last year, compared with 46.5% of households in 2020.

The SILC household survey is the official source of data on household and individual income, and it provides a number of key national poverty indicators, including the at risk of poverty rate, the rate of enforced deprivation and the consistent poverty rate.

The CSO said that people most at risk of poverty in 2021 were those who described themselves as "unable to work due to long-standing health problems" and they made up 39.1% of the total. The comparable rate for employed individuals was 4.4%.

Covid-19 income supports had the greatest impact on the risk of poverty of unemployed respondents, it added.

The at risk of poverty rate for this group was 23.2%, while without Covid income supports it would have been 44.1%.

The at risk of poverty rate for employed respondents would have been 11.7% without pandemic income supports, the CSO added.

Today's CSO figures also show that the consistent poverty rate, which includes those persons who are defined as being both at risk of poverty and who are also experiencing enforced deprivation, was 4%, down from 4.7% in 2020.

People in households where there was one adult and one or more children aged under 18 had the highest consistent poverty rate at 13.1%.

The consistent poverty rate was lowest for people living in households consisting of three or more adults and no children (2.2%), the CSO added. 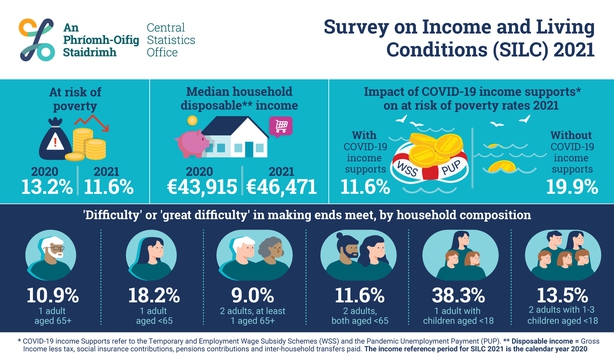 But without Covid-19 income supports there would have been a 6.2% decrease in year on year median household disposable income.

The CSO noted that household disposable income rose as the highest level of education attained by the head of household increased.

Where the head of household had an educational attainment of primary level or below, the median household disposable income was €24,660, compared with €63,914 for those with a third level degree or above.

Meanwhile of households that paid rent, 16.2% said there was at least one occasion during the year when they did not pay their rent on time due to financial difficulties.

Of owner-occupied households with an outstanding mortgage, 5.3% reported that they did not pay their mortgage on time due to financial difficulties on at least one occasion in 2021.

"While the Wage Subsidy Schemes and the Pandemic Unemployment Payment continued to support people from the worst economic impact of the pandemic, today's figures are very concerning and point to the long term economic and social impact of the pandemic on households," said Dr Seán Healy, Director, of Social Justice Ireland.

"The sheer scale of the numbers of people living in poverty is worrying, particularly when we consider the impact of the Government pandemic income supports in cushioning households from the worst effects of the pandemic."

"Today's figures show we are not making sufficient progress in addressing poverty and social exclusion."