Rents nationally rose at an annual rate of just over 10% in the last three months of last year, according to listed rent prices compiled by the property website Daft.ie.

On a quarterly basis, rents rose in the Dublin area by just over 4% compared to just 0.5% in Munster.

This is a reversal of a trend from earlier last year, which saw rents rising fastest outside the capital.

The report also notes that adverts for rental properties fell to just 712 properties available for rent in Dublin on the first of this month, compared to 820 at the end of November.

This is down 73% on the same number available in February last year.

The number of properties available to rent remains at record lows for the series, which goes back to 2006.

The corresponding figure for the rest of the country rose from an all-time low of 640 in November to 685 in February.

It says this counters claims that occupancy rates are low in some luxury apartment developments.

Other parts of the country have seen double-digit increases in rents over the past year. In Mayo, average rents have increased by 20.1% to €915 per month.

The latest figures from the Central Statistics Office showed private rents increasing at an annual rate of 8.4% in December. 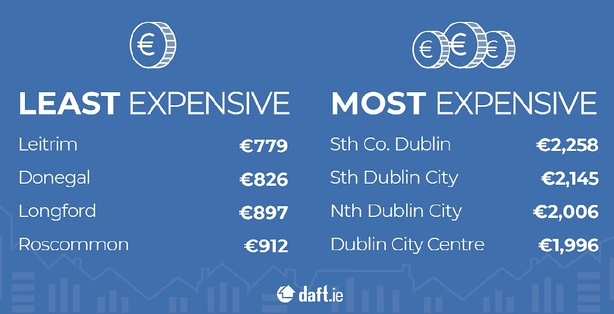 She told the Dáil that Government policy has led to home ownership becoming a pipe dream for a generation.

Ms McDonald said the last Budget did nothing for renters and the new measures set to be announced this week must address that.

Ms McDonald urged Government to first cut rents and then freeze them for the next three years.

@MaryLouMcDonald raises the issue of rent. "The number of homes available to rent is at its lowest in 15 years. @MichealMartinTD says the state is putting in the largest amount of capital ever into social and affordable housing. | More: https://t.co/nq1nFDYv6B pic.twitter.com/64zXjV2ypU

Taoiseach Micheál Martin responded saying the country needs an average of 33,000 homes built every year out to 2030.

Mr Martin said the State was investing more than ever before to achieve this.

If homes are not built in these numbers then rents will become even more expensive, he warned.

"It is basically about supply… I do believe it is a crisis and I don't think we have the luxury of opposing planning applications," he said.

The Taoiseach then suggested that Sinn Féin had opposed the building of 6,000 homes.

This led to a heated exchange with Sinn Féin housing spokesperson Eoin Ó Broin accusing the Taoiseach of "appalling dishonesty".

Following the intervention of the Ceann Comhairle, Mr Ó Broin substituted the accusation of lying with "knowingly misleading" the house.

She told the Dáil that the latest Daft report shows that the rent cap of 2% in Rent Pressure Zones is not working.

Mr Varadkar said the issue of rising house and rent prices is not something new and has been there for a number of years.

He said the issue is a potential barrier to further economic growth and development.

Despite this, he said, last year was a record year for IDA and Enterprise Ireland job creation.

However, he said it is certainly the case that the population has grown so much and the economy has grown so fast that we are facing serious infrastructural constraints, a housing shortage, the need for very significant investment in electricity, public transport and water services for example.