2021 was a tough year for many businesses across the country, particularly non-essential retailers who were shut for almost five months of the year.

The year started in the country's third lockdown, with all but essential retail shut.

Retailers that had invested in online trading platforms the previous year were counting their blessings, with online sales their only source of revenue.

As people stayed at home, the popularity of online shopping continued to grow, and for the first time ever, the January sales were solely online. As doors remained shut for the second month of the year, Retail Excellence said there was a sense of despair among retailers.

It called on the Government to publish a reopening timeline for the sector, and to allow click and collect services to resume.

"It won't sort out all our problems, but it will demonstrate that the Government is tuned in to our difficulties and it will provide some comfort and support to hard pressed retailers," Duncan Graham, Managing Director of the group said.

He also called for Government supports to be extended beyond March. 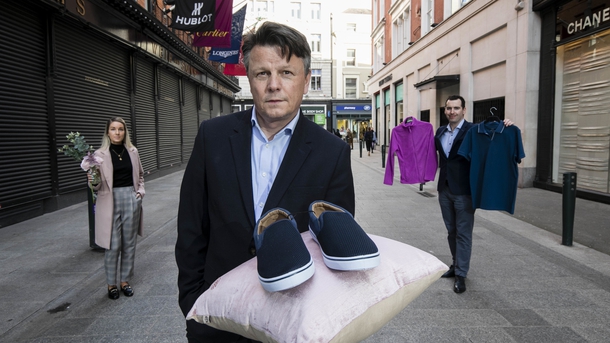 There was good news for shoe shops in March.

The Government announced that retailers would be allowed to measure and sell children's shoes – but by appointment only.

The Government are finalising guidance to allow shoe shops to re-open to sell children's shoes on an appointment basis, the Taoiseach has told the Dáil | Read more: https://t.co/Gqx1qJxMO9 pic.twitter.com/2OFs5mIPys

Taoiseach Micheál Martin said shoes were an essential item, in terms of the growth and development of children.

Ahead of the announcement, a consultant paediatrician at the Bons Secours Hospital in Cork had called for children's shoes to be deemed essential items.

Speaking on Drivetime, Dr Niamh Lynch had said children were experiencing pain after wearing ill-fitting shoes due to their sale being prohibited in store. 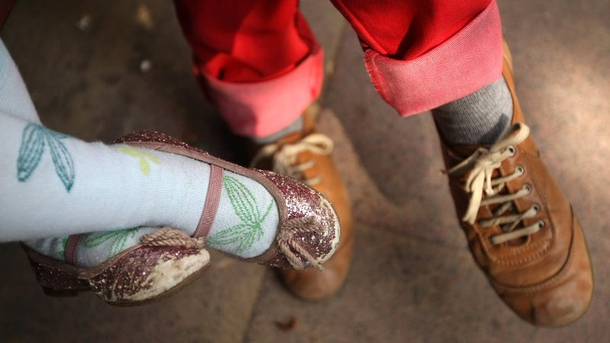 Meanwhile, the DIY boom that we had seen in previous lockdowns took hold once again.

Despite the country remaining under strict lockdown, the volume of retail sales jumped almost 14% in February compared to the previous month.

The figures revealed that online sales from Irish companies continued to grow, rising from 11% in January to 13% in February. 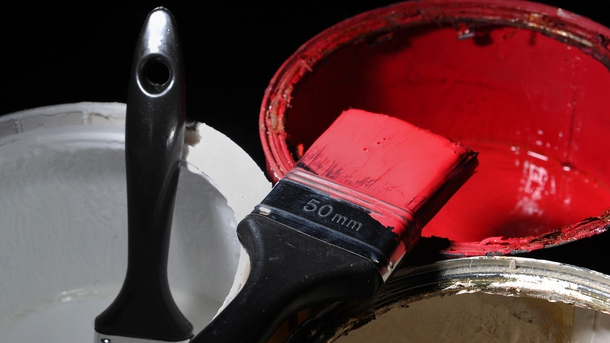 Many retailers faced another setback in March, after a giant container ship got stuck in the Suez Canal in Egypt.

The incident created huge tailbacks on one of the world's busiest trade routes.

It emerged that the ship had veered off course in a sandstorm. 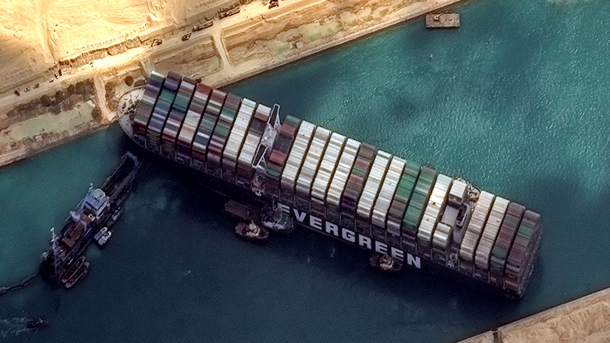 Hundreds of customers queued outside branches of Primark in Northern Ireland, as non-essential retail reopened there.

Long queues formed around the streets of Derry and Belfast.

Primark on Castle Street in Belfast opened earlier than planned, to manage social distancing due to the large number of customers waiting outside. 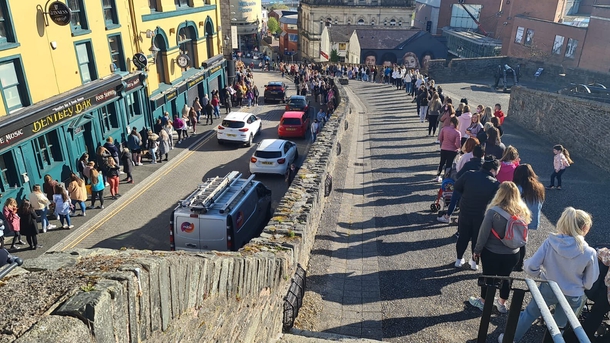 Meanwhile, the outlook for the sector here started to look up.

News emerged that the updated reopening plan would see non-essential retail reopen in May, along with the resumption of click and collect services.

Penneys, along with a number of other retailers said it would offer shopping by appointment as a temporary measure in all of its Irish stores the week before the full reopening.

Towards the end of the month, Carphone Warehouse announced that it would be closing its Irish business, leading to 486 redundancies. 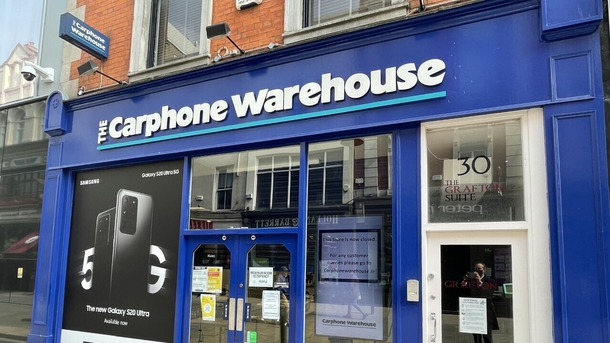 The company said its 69 standalone and 12 outlets within a store would all close.

It said that over the last year, Carphone Warehouse Ireland has seen a drop in footfall of over 40%.

The most important day of the year for non-essential retailers came on 17 May, as they welcomed back customers to their shops after being shut for almost five months.

Retail Excellence described it as a landmark day for the 280,000 sector employees around the country. 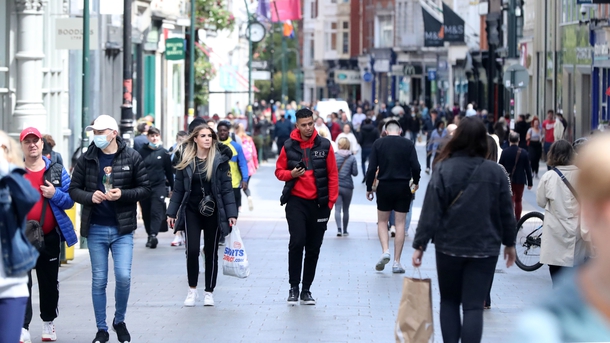 It was the first time for many businesses, including small shops and independent traders, to be able to trade for almost five months and the relief was palpable.

But it said the sector was still concerned about the longer-term outlook, and that Government supports for vulnerable businesses must continue.

Minister for Business, Employment and Retail Damien English paid tribute to the resilience and patience of business owners and workers in the Irish retail sector.

"It has been a long road and I want to thank those in the sector who have worked closely with myself and the Government over the last few months to make this day possible," he said. 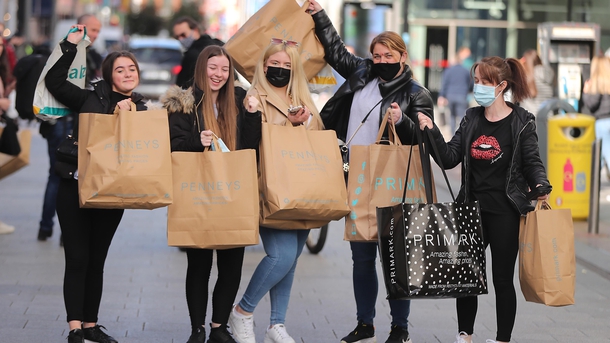 Data from Revolut revealed that users spent more money in Penneys stores than any other non-essential shops in the country on the first day of the reopening.

The next highest spend was in JD Sports outlets, followed by Brown Thomas, Zara and Argos. 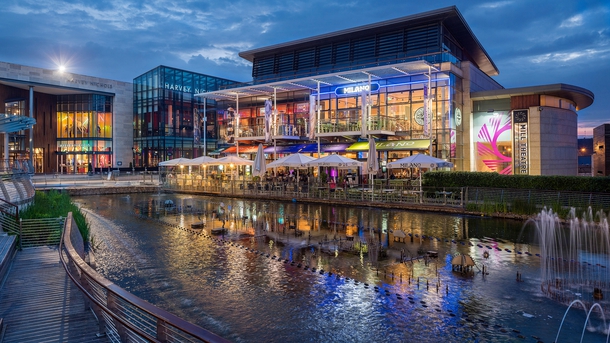 The issue of staff shortages in the sector began to emerge, as shops started reopening.

The director of Dundrum Town Centre in Dublin said a number of retailers at the centre were unsure if they would be able to operate full opening hours due to staff shortages.

Speaking on RTÉ's Brendan O'Connor programme, Don Nugent said the pressure was on for retailers to recruit staff during what he said was "a very short window".

When it comes to sustainability, many retailers continued to up their game throughout 2021.

In June, IKEA's Buy Back service was officially launched in Ireland as part of the furniture maker's commitment to becoming fully "circular" and climate positive by 2030.

The service encourages customers to sell back IKEA furniture that they no longer need.

In return they receive a voucher to spend at the store for use when they need something.

The furniture will be resold by IKEA at cheaper prices, thereby giving a second life to IKEA products. 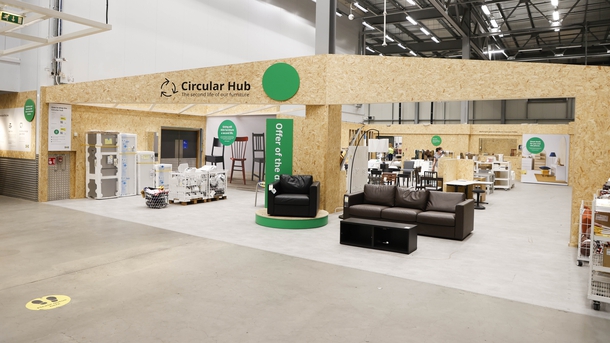 While most businesses reopened in May when restrictions were lifted, some remained shut.

The closure of international retailers, such as Debenhams, Carphone Warehouse and Topshop have been well publicised, but less has been heard about the smaller independent businesses.

We spoke to some of those whose shops, pubs and cafes have closed their doors for good. 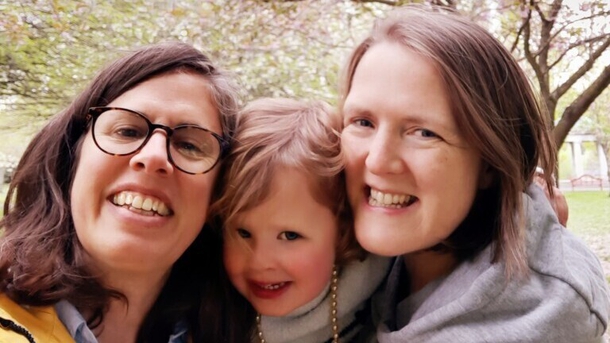 Sticking with the topic of store closures, Gap announced it would be closing all of its stores in the UK and Ireland by the end of the year.

The retailer had been active in the UK since 1987 and has had stores in the Republic of Ireland since 2006.

There were a total of 81 stores in the UK and Ireland, according to the Gap online store-finder.

In Ireland, Gap had shops in Blanchardstown, Dundrum and Henry Street in Dublin as well as one in Limerick. 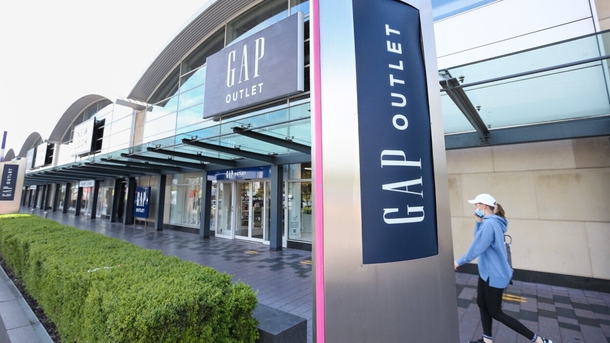 The Gap decision follows a spate of high street closures this year, including brands such as Dorothy Perkins, Wallis and Burton - part of the former Arcadia retail empire.

More than 200 shops across the brands were forced to close and over 2,000 jobs were axed in February. For many of us, the phrase "currently out of stock" became all too familiar.

Declan Allen from TU Dublin, talked us through the many different reasons which can cause stockouts.

New research highlighted the struggles many retailers faced as they tried to get back on their feet after forced closures.

A survey by Retail Excellence revealed that 80% of retailers were in rent arrears with at least one landlord.

The research also found that in one fifth of rent arrears cases, the retailer claimed there had been no engagement whatsoever from their landlord. 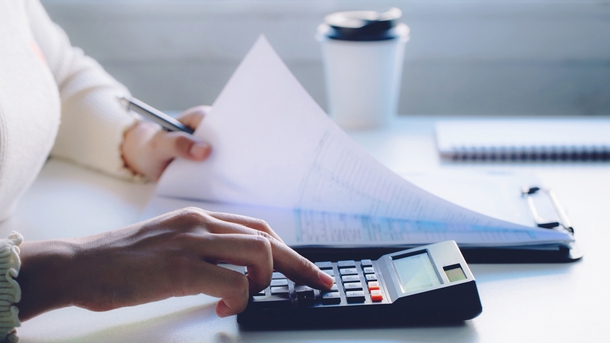 Amazon announced that it will open its first warehouse, or fulfilment centre, in the Republic of Ireland, creating 500 new jobs.

It said the new 630,000 square foot centre at Baldonnell Business Park in Dublin, will hold millions of items to be picked, packed and shipped to customers across Ireland as well as the rest of Europe.

The company said the new centre, which will open next spring, will provide faster delivery for customers across Ireland, including one-day delivery on thousands of items.

Amazon also said that a second delivery station will open at Northwest Logistics Park in Ballycoolin, serving customers in Dublin and the surrounding areas. 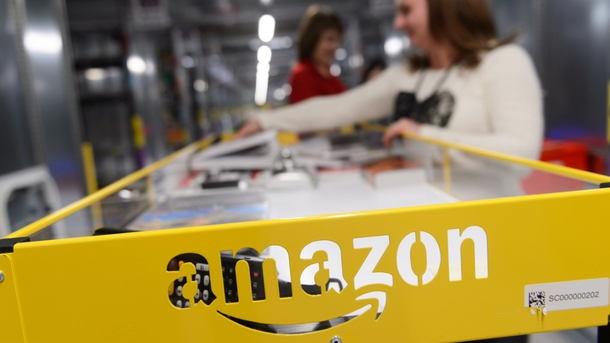 The 'shop local' trend that has been growing in strength since the start of the pandemic continued throughout 2021.

New research published in September showed that 66% of Irish shoppers plan to continue spending more on local goods and services.

The survey conducted as part of the Local Enterprise Office's 'Look for Local' campaign, revealed that most consumers bought locally during the summer months to support their local economy.

Meanwhile, we spoke to retailers who were hopeful that the shop local habit will continue.

"People suddenly realised what we have on our doorstep and that it wasn't necessary to travel to bigger locations or cities or shopping centres to do their shopping," she said. 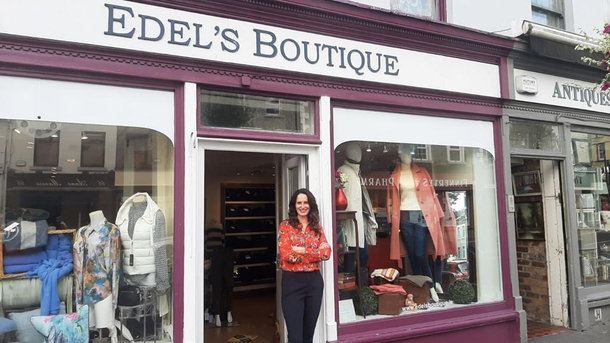 The issue of staff shortages continued throughout September.

Retail Excellence called on the Government to wind down the Pandemic Unemployment Payment (PUP) faster, to address the shortages.

It said a lot of people left the industry during the height of the Covid crisis, when the sector was shut.

But the Government said it had no plans to change its schedule for unwinding the PUP.

Tánaiste Leo Varadkar said sectors including aviation, the arts and entertainment industries were still relying on it.

Budget 2022 was revealed on 12 October, and business groups had a mixed reaction to the measures announced. 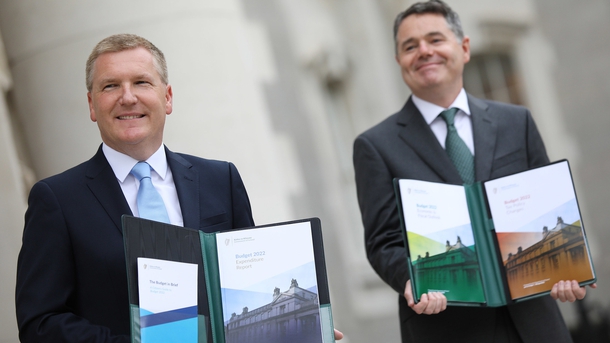 Most welcomed the extension of the Employment Wage Subsidy Scheme (EWSS).

However, Retail Excellence said it was not a budget for business, given that retailers have significant legacy debt along with rising energy costs, which it said were not being fully addressed by the Government.

The Small Firms Association said the budget wouldn't do much to reduce the cost of doing business for the small business sector.

While Duncan Graham, Managing Director of Retail Excellence, said retailers were disappointed not to see additional supports such as online grants for businesses, particularly those with fewer than ten employees who are in greatest need of assistance.

He also pointed out that some retail workers were still receiving the PUP, despite the reopening of the sector.

"We still have approximately 15,500 retail workers on the PUP, and we need to see a robust plan to get these people back to work to address staff shortages."

As the new Omicron variant of Covid-19 started to emerge across the world, the Government said it had no plans to close retail - or any businesses.

Tánaiste Leo Varadkar said it was not something that could be ruled out, but said the epidemiological situation at the time did not warrant it. 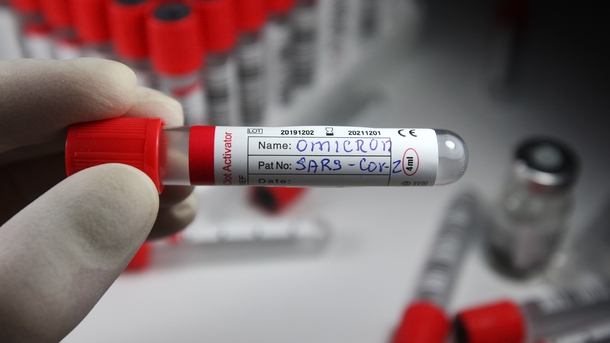 Heading into the busy Christmas shopping period, Retail Ireland said the mood across retail was broadly positive, but somewhat apprehensive.

Figures from the representative body revealed that up to €5.4bn could be spent by consumers this Christmas.

This worked out at around €832 per household, the organisation claimed, and represents a 5% increase on what was spent last year. 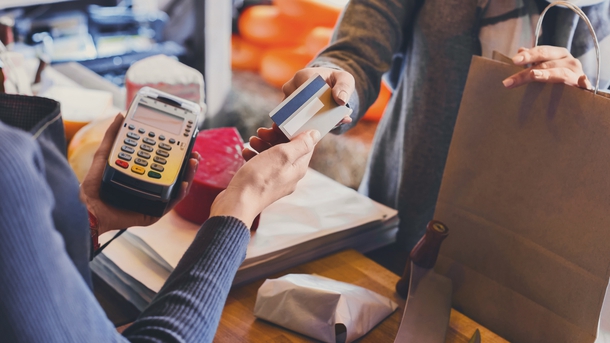 Taking away from some of that festive cheer, Mandate, which represents 30,000 retail workers said there were worrying reports of increased abuse towards shop workers, with some being kicked, spat at and verbally abused.

The union called for an additional payment to be made to retail workers experiencing abuse from customers in the run up to Christmas.

It asked customers to respect shop workers, which it said are essential frontline workers. A truckers' and hauliers' protest against rising fuel prices impacted retailers in Dublin city, at the busiest time of the year for sales.

Retail Excellence said the protest was a "body-blow" to retailers in the capital.

It follows a similar protest last month, which had significant ramifications for retailers. 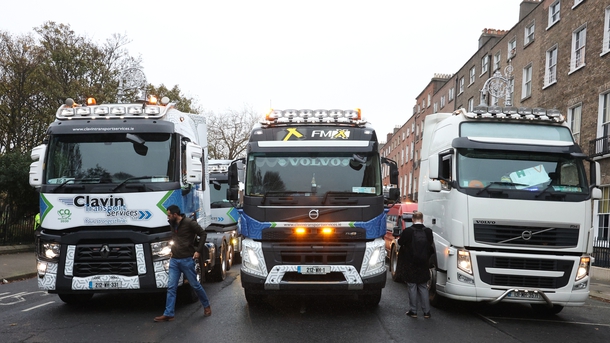 Black Friday was another big event for retailers this year.

Research from Revolut showed that consumers continued to shop Irish, with almost three-quarters of spending going to businesses or websites in the State.

Meanwhile, data from the CSO revealed that almost 80% of internet users purchased goods or services online in 2021.