The reading for this month stood at 86.8, effectively unchanged from the figure of 86.4 reported for September.

This follows a pattern of broadly stable sentiment numbers for the past six months.

Despite a relatively healthy reading for October, the data suggests that Irish consumers are continuing to be cautious with their spending.

"The October survey suggests Irish consumers are very much in a wait and see mode at the moment," said KBC Bank Ireland's chief economist Austin Hughes.

"Encouraging news on the economy and jobs suggests a much better outcome than might have been envisaged when the pandemic first struck but this is tempered by ongoing concerns around personal finances that hints at some element of disconnect between a booming Irish economy and a bothered Irish consumer at present," he said.

The Irish consumer sentiment reading for October contrasts with another disappointing preliminary result for the US, which fell back close to a ten-year low this month. 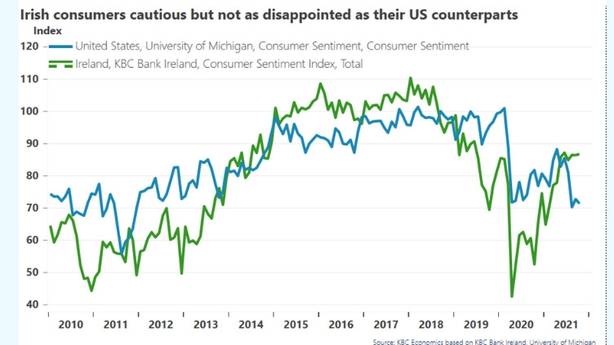 "The marked pull-back in US sentiment appears to be linked to specific cut-backs in pandemic income supports, a more general sense that the new administration's policy proposals may have overpromised and could under-deliver, sharply higher inflation and broader concerns that the US economic rebound could weaken materially through the coming year," said Mr Hughes.

The survey for October was largely completed before the presentation of the Budget or the publication of consumer and property price inflation data on 14 October.

However, the main elements of Budget 2022 were signalled well in advance, while a rising inflation trend has become established of late.

"There is little to suggest these recent developments will markedly alter the mood of Irish consumers," said Mr Hughes.

"Indeed, it might be argued that the economic background to the Budget that saw a marked upgrade of official forecasts for activity and employment during the survey period presented a picture of much improved 'macro' prospects," he added.

The report also suggests that the announcement of Ireland’s agreement to participate in a new global tax framework provided an increased sense of stability about this country’s economic model.

"Most associated commentary, that suggested any adverse impacts of that tax framework would be manageable, may have underpinned improving sentiment on the ‘macro’ outlook," Mr Hughes said.

These developments meant the October sentiment survey showed the strongest 'macro' reading in three years with views on general prospects for the Irish economy at their best levels since November 2018 with views on the outlook for jobs the healthiest since September 2018.

"Encouraging as these developments are, we would caution against any inference that consumers believe the Irish economy has returned to boom-time conditions - the shadow of Brexit hung heavily over the late 2018 readings," said Mr Hughes. The October survey contained a supplementary question asking how much consumers felt their cost of living had risen in the past twelve months.

The average increase across the 1,000 respondents to the survey was 4.9%.

"Given that the inflation figure published by the Central Statistics Office for September was 3.7% and a material further increase in the official inflation rate is expected before end-year, the sentiment survey estimate appears a reasonable barometer of current price pressures," Mr Hughes said.

According to the data, 42% feel their personal living costs have risen by more than 5% while 25% say costs are flat or falling.

Those on lower incomes, struggling to make ends meet and outside Dublin were more likely to cite relatively large increase in living costs in past twelve months.