Tánaiste Leo Varadkar has said the 'Help to Buy' scheme will remain in place for a little longer and that there will be an announcement on this on Budget Day.

Speaking in Washington, Mr Varadkar said increases in house prices are unwelcome for those trying to buy, but that the Government's 'Housing for All' initiative will see a ramp-up in investment in social housing.

He said this would free up other homes for renting or buying which should help to contain prices.

His comments come as two separate reports today by property websites myhome.ie and daft.ie found that asking prices for homes in the third quarter were up 9% across the country compared to the same period last year.

It compares to a rate of 13% in the second quarter of the year, suggesting the rate of increase is moderating.

Tánaiste @LeoVaradkar has said house price increases are unwelcome for those trying to buy, but the Government's Housing for All initiative will see more investment in social housing. He said this should free up other homes and help to contain prices | https://t.co/HqdHXQMcqK pic.twitter.com/WBGXJXmD2D

"The latest signals from the sales market suggest that, thankfully, the worst of the Covid-19 squeeze has passed," said Ronan Lyons, economist at Trinity College Dublin and author of the daft.ie analysis.

The report by myhome.ie claims prices in Dublin were 7.3% higher in the period between July and September compared to the same three months in 2020.

Daft.ie's analysis, however, puts that rate of price growth in the capital at 4.9%.

Myhome.ie calculates that outside of Dublin inflation ran at around 10.1% over the period.

This compares to daft.ie’s estimate, which puts the increase during the quarter outside of the main cities at 12.9% year on year.

Despite the differences in the findings of the two reports, both agree that the rate of residential property price inflation continues to be driven by a chronic lack of supply and high demand.

"The market is still starved of supply, with prices being bid-up aggressively by homebuyers," said Conall Mac Coille, Chief Economist at Davy and author of the myhome.ie report.

"This behaviour is evident in transactions being settled well above asking prices. For a limited pool of 450 properties sold during the summer, we have calculated the transaction price was 6.5% higher than the asking price, compared with a premium of 2.7% in Q2 2021." 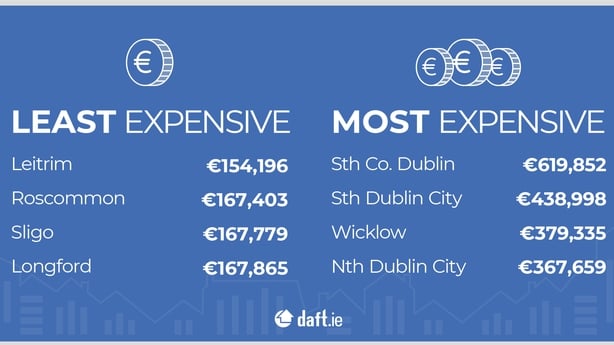 The report by myhome.ie said there are currently 13,500 properties for sale on its site, up slightly from 12,700 in the second quarter but still well below the 20,000 prior to the pandemic.

Daft.ie found that on 1 September, the total number of properties available to buy was just below 12,700, up slightly from levels recorded earlier in the year, but still one of the lowest figures recorded since the rise of advertising properties for sale online.

It said the total availability of homes for sale nationwide on that date was one third lower than the same date a year earlier and a little over half the amount for sale in September 2019.

"Inflation has eased a bit and there has been a modest improvement in the number of homes available to buy at any one point," said Mr Lyons.

"Nonetheless, while the Covid-induced spike in market conditions may be passing, the underlying issues remain."

"The stock for sale remains well below pre-Covid-19 levels, while many parts of the country are still seeing prices that are at least 10% higher than a year ago."

"Additional supply remains key to solving Ireland’s chronic housing shortage and, with the pandemic appearing to be under control, housing remains a critical issue – economically and politically – for policymakers to address."

According to daft.ie, the average list price for a house nationally between July and September was €287,704, 22% below the Celtic Tiger.

In Dublin the average asking price in the third quarter was €399,323, up 4.9% on the same period last year – the slowest rate of inflation in a year.

Daft.ie found the most rapid rises in prices were in Mayo and Leitrim.

Mr Mac Coille said in light of the latest data Davy has raised its forecast for property price inflation at the end of this year to 10% from 8%.

The Institute of Professional Auctioneers & Valuers (IPAV) said the drop in supply of new homes on the market was striking if unsurprising.

"Given the tightness of supply and the very strong demand it is likely that prices achieved for homes in many areas may in fact be exceeding asking prices, the latter which the daft.ie report captures," said Pat Davitt, IPAV's Chief Executive.

"Our own study of actual prices achieved by auctioneers in the first six months of 2021 over the latter six months of 2020 found an acceleration in house price increases and particularly so in the country."

However he said agents around the country are now reporting more second hand properties coming to the market.

On RTÉ's Morning Ireland Mr Davitt said that low interest rates and fixed interest rates with longer terms are encouraging more people to get on the property ladder.

He said buyers "don't mind paying extra because they are paying it over the long term".

Mr Davitt said that while there are a lot of people moving to rural areas prices are 15% to 16% behind where they were in 2006.

He said as long as stock is in short supply and money to buy is available, there will be competition in the market and prices will continue to rise.

Meanwhile, REA's Barry McDonald said that while there are concerns that house prices could reach levels seen at the peak of the Celtic Tiger period, lending rules continue to limit the availability of credit.

"We are still a bit off that but when you look at supply and demand you do wonder where this is going," Mr McDonald said.

However, he said that Central Bank lending rules are helped to preventing situation where people find themselves in negative equity.

"The level of borrowings versus the value of the property isn't at quite such an alarming rate," he added.