When it comes to unique selling points of mobile phones these days, it is usually all about the camera set up, or latest display technology or battery life.

Few manufacturers try to sell mainstream devices on the basis of how indestructible they are.

But that's exactly what HMD Global is doing with the new Nokia XR20, a phone it claims is built to last.

The first thing you notice when you unbox the XR20 is that it looks like it is already in a case.

That’s because there is a rim running around the outer edge of the screen, with a bit of a lip on it.

The MIL-STD-810H military grade casing is designed like that as part of its rugged credentials, the idea being that if you drop a phone if it lands face down the display is less likely to crack if it doesn’t directly hit the ground.

Given that most of us probably have some sort of a case on our phone which masks the true design, you aren’t really losing out with the XR20’s built in case design.

On the right side is a volume rocker and power button which also doubles as an efficient fingerprint sensor, while on the left is a dedicated button for Google Assistant.

One interesting addition is that on the top left of the device is a red "Emergency" button. It can be customised to trigger an emergency number to call, or can have a variety of other functions assigned to it.

The plastic back of the phone has a slightly roughened but shimmery look to it, meaning it is easier to hold but looks ok at the same time.

Right in the centre near the top is a protruding square camera block housing the dual camera set up along with the flash.

There’s also a loop at the bottom left corner for attaching the phone to a lanyard.

The phone feels heavy and certainly doesn’t have the refined premium appearance that most other smartphones have these days.

But presumably that image is part of what you are buying into when you purchase a phone that’s designed to be durable, functional and looks reasonably well. 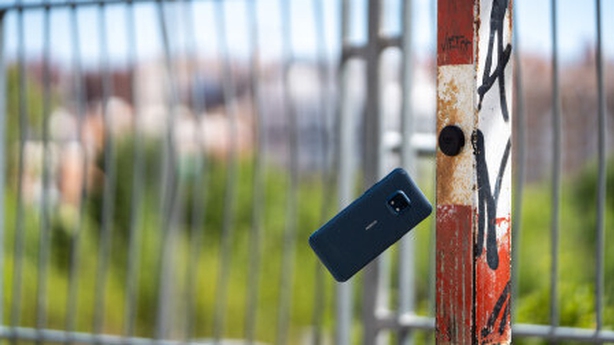 It does a pretty good job of the basics – it is bright (at up to 500nits) and sharp, and colours are strong. It does lack a little definition and that really strong image clarity you get with HDR.

But overall for a device at this price point, there’s not a lot of room for complaint.

The front facing camera is located under a punch hole in the centre top of the screen.

There is also quite a substantial bezel around the outside of the display which reduces the level of immersion you experience when watching something in full screen.

To boost the toughness of the device, the display is made from Corning Gorilla Glass Victus – one of the toughest types of glass available for phones.

So optimistic are the manufacturers in its robustness that they are offering a free screen replacement if it breaks in the first year.

We did put the claim that it can withstand a drop from 1.8m to the test and yes, it did survive.

One nice touch (pardon the pun) is that the display is sensitive enough to react to wet hands and fingers that are covered in gloves.

The phone is powered by the Qualcomm Snapdragon 480 5G – not the most powerful of processors but it does come with the added benefit of 5G.

Coupled with 4 or 6GB of RAM, it manages to do a respectable job on most mild to moderate tasks, handling them with relative ease, although push it hard with multitasking, heavy duty apps and power-hungry games and you will notice some lagging creeping in.

On board is either 64GB or 128GB of memory, but this can be expanded by another 512GB using the MicoSD card slot.

In terms of its battery prowess, the XR20 has a 4,630mAh power pack which promises up to two days battery life when the phone is being used at average levels of activity.

A positive is that it supports both 15W Qi wireless charging as well as 18W fast charging.

It runs on Android 11, and Nokia will provide you with 3 years of OS upgrades as part of the deal, which means the phone will have access to the latest software for some time.

Also on offer are monthly security updates for four years. 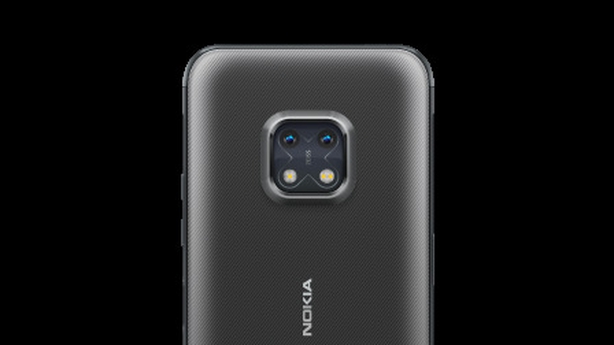 When it comes to imaging, the Nokia XR20’s main camera if a whopping 48MP sensor.

There is also a second 13MP ultrawide offering.

Both use Zeiss technology and the result isn’t bad considering the mid-range pitch of this phone.

You don’t get the same level of clarity and colour replication that you might expect from a higher tier device.

But the XR20 does hold its own in the middle of the park, particularly with the ultra-wide camera.

There is the usual plethora of modes and features that are by now standard on most reasonable smartphones, like Portrait, Cinema, Night and Dual Sight.

All perform to a reasonable standard, albeit it with some lags in processing times depending on what you are asking the phone to do and the prevailing light conditions.

A new SpeedWarp mode allows you to fast forward video that’s been captured using the mobile.

Overall the imaging package, including the front facing 8MP snapper, does a solid job.

As mentioned earlier, the durability of the XR20 is one of its main calling cards.

Along with the toughened screen, the offer of a replacement display in the first year and the built in case, the device is also IP68 rated meaning it can survive submerged in water for up to an hour.

What’s more, Nokia also offer a three-year extended warranty with the phone, something that is unusual.

The device boasts extra loud speaker that reach 96dB, if annoying the neighbours is your thing.

You won’t get a wall charger in the box, as part of Nokia’s effort to reduce waste.

But it does have a 3.5mm audio jack, which in this day and age is increasingly unusual.

If you are the type of person who can’t keep the screen intact on your phone for more than a couple of months at a time, then the Nokia XR20 is certainly work a look.

It appears to live up to at least some of its ruggedness claims and the extra guarantees it offers on screen replacement, plus that overall 3-year warranty and software and security upgrades aren’t to be sniffed at.

The camera set-up is perfectly credible and there are many other worthy features.

But it is heavy and clunky and doesn’t look like a typical premium handset.

And for what you are getting, the price tag of €449 is bordering on the hefty side.

However, if you regularly have to replace or repair phones due to damage, then perhaps it might be worth the investment.

daa: Passenger numbers may not fully recover until 2025