Listed house prices have increased by 7.6% on average over the past year, while the number of homes available to buy are down 34%, according to the latest report from property website Daft.ie.

The average listed price in the first quarter of last year was €256,000.

According to the report, this marks the second quarter in a row where prices are nearly 8% higher than a year previously.

The average sale price nationwide in the first quarter of 2021 was €275,751, up 68% from its lowest point in early 2013 but still one quarter below the Celtic Tiger peak. 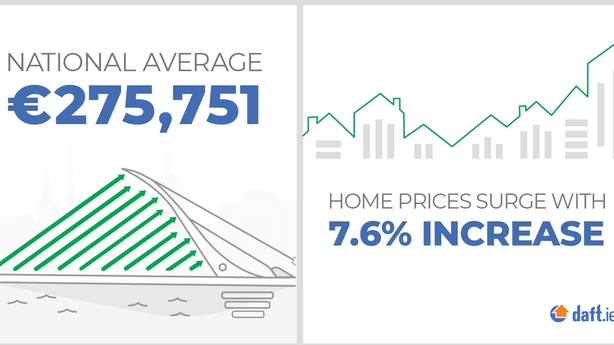 In Dublin, prices rose by 6.9% in the year to March 2021, but the largest increases were seen in the counties surrounding Dublin and in the other cities.

In Cork, Galway, Limerick and Waterford cities, listed prices were between 11% and 12% higher in the first quarter of 2021 than a year previously.

Prices in Leinster, outside of Dublin, were 12.4% higher on average.

Meanwhile, in Munster, Connacht and Ulster, outside the city areas, the report shows that there was much more muted price growth, with annual increases of close to 4% in Munster and the three Ulster counties and just 1% in Connacht. 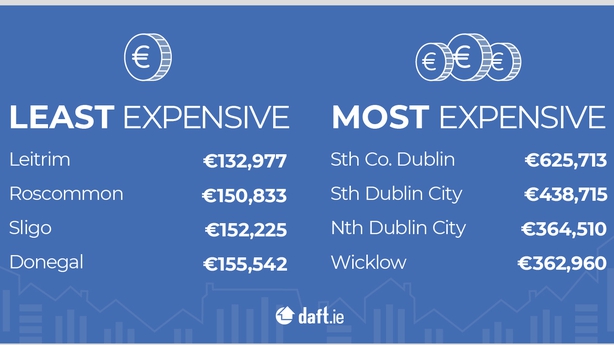 The total number of properties available to buy on March 1 was just under 12,000, the lowest figure recorded since the rise of advertising properties for sale online.

This represents a year-on-year fall of 40% nationwide, although the stock available for sale in Dublin has fallen by less than the national average.

Ronan Lyons, author of the report and economist at Trinity College Dublin, said the figures in the report confirm that the impact of the pandemic on the sale market was a massive shock to supply.

"The total number of homes listed for sale in the 12 months to February nationwide was just 45,700, down a third on the previous 12-month period.

"This sudden collapse in supply, at a time when demand has held up remarkably well, has converted into sharp upward pressure on prices," he said.

Mr Lyons said the findings come as a reminder that even when the pandemic subsides, the need to build new homes every year will remain.

Speaking on Morning Ireland, Ronan Lyons said while many would expect prices to fall in a pandemic, the nature of this recession sees many unemployed while many others are working from home with more income and less spending.

He said that demand remains strong but the collapse of supply is due to a lack of new homes coming onto the market and a 40% reduction in the supply of second hand homes for sale.

Mr Lyons said the supply of housing will be a key issue for next 20 to 30 years as we adapt to change patterns including supply of smaller houses and the fact people are living in more urban areas.

Many agents are not listing new properties to the market because of the severity of the Covid-19 restrictions on showing properties, saiid Pat Davitt, IPAV Chief Executive.

"We have sought an easement from the Government on one aspect – to allow agents to show properties, under strict health and safety protocols of course, to potential buyers who can confirm they have the necessary funds in place to purchase," he said.

He said auctioneers throughout the country are seeing extremely strong demand for homes that they are unable to satisfy.