Britain's economy shrank in November for the first time since the initial Covid-19 lockdown last spring, hit by a tightening of social-distancing rules.

The 2.6% monthly decline was much smaller than most analysts expected - a Reuters poll had pointed to a 5.7% contraction - but several economists said Britain was still likely to suffer a double-dip recession.

Britain's economy, which shrank more sharply than any other major advanced economy in the first half of 2020, is now 8.5% smaller than it was before the start of the coronavirus pandemic in February.

"It's clear things will get harder before they get better and today's figures highlight the scale of the challenge we face," finance minister Rishi Sunak said.

But the roll-out of vaccines in Britain - which has been faster than elsewhere in Europe - was a reason to be hopeful, Sunak said.

Several economists warned that Britain was still on course for renewed recession, with the economy likely to shrink in both the final quarter of 2020 and the first three months of 2021.

"A third lockdown means that a double-dip recession in the first quarter of this year may be inevitable, particularly if the current post-Brexit disruption persists through the quarter," said Suren Thiru, head of economics at the British Chambers of Commerce.

The scale of the hit to the economy in November was much smaller than in the first lockdown last year.

The Office for National Statistics attributed this to businesses adjusting to social-distancing rules and schools remaining open.

But with a third, tougher lockdown now in place, and the impact of the country's new, less open trading relationship with the European Union also a drag on business, the country is  facing major challenges in early 2021.

Bank of England Governor Andrew Bailey said this week that it was too soon to say if further stimulus would be needed after the central bank ramped up its bond-buying programme to almost £900 billion in November. 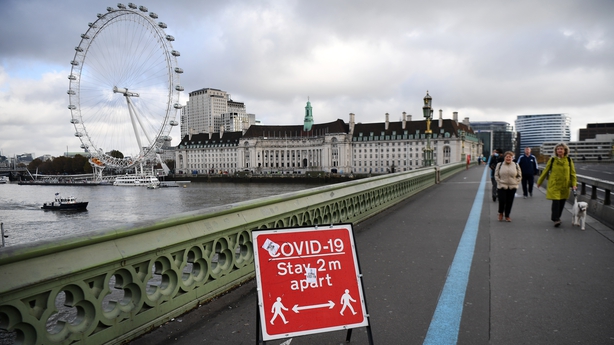 At its lowest point in April, when many businesses closed temporarily, output was a record 25% below its year-ago level.

November's downturn was led by the services sector, where output fell 3.4% from October as pubs, restaurants, non-essential shops and many other consumer services businesses had to shut as part of a four-week lockdown in England and similar measures in other parts of the UK.

Part of the scale of the hit to Britain's economy in 2020 reflects a decision by the ONS to take account of disruption to routine medical care and schooling due to Covid-19, an approach which not all countries' statistics agencies have taken.

Bank of England Deputy Governor Ben Broadbent has estimated this factor accounted for a quarter of the almost 9% annual drop in output recorded for the third quarter of 2020.