New figures from the Central Statistics Office show that the economy - as measured by gross domestic product - grew by 11.1% in the third quarter compared to the second - the largest quarterly level of GDP on record.

The big jump was expected following the sharp hit seen in the second quarter, and is in keeping with patterns seen in other countries.

The CSO noted that most of the growth in the economy came on the back of spending by consumers and from exports.

The reopening of parts of the economy during the summer opened the way for consumers to lead a strong recovery in sectors like hotels, restaurants and shops.

Personal consumption grew by 21.3%, almost reversing the fall it experienced in the second quarter.

Construction also came back strongly, while exports of pharmaceutical companies continued to grow.

On an annual basis, the CSO now estimates the economy has grown by 8.1% compared to the same time last year.

The CSO today also revised its figures for the second quarter and said that GDP fell by 3.2% on a quarterly basis in the three months from April to June from an initial estimate of a slump of 6.1%.

The CSO said that modified domestic demand, a measure that strips out some of the ways multinational firms can distort the Irish GDP figures, jumped by 18.7% quarter-on-quarter from July to September.

Commenting on today's figures, Finance Minister Paschal Donohoe said it was important to put them in context.

"While GDP is up in annual terms, it is not an accurate measure of what is going on in the economy, given the size of the multinational sector. Domestic demand, along with most other domestic indicators are still down in annual terms following sharp contractions earlier in the year," the Finance Minister said. 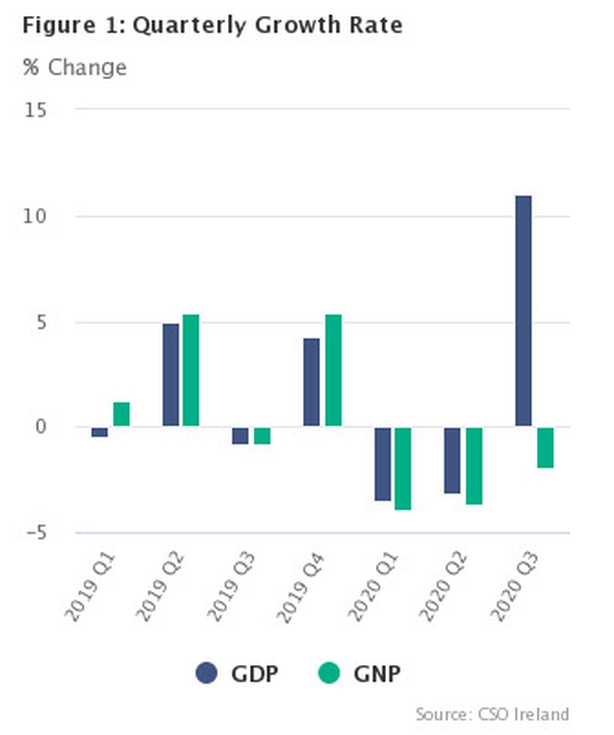 He said that while net exports made a significant positive contribution to GDP in year-on-year terms on the back of robust growth in pharma exports, the domestic economy still lags in annual terms having suffered a severe hit in the second quarter.

"Exports in the pharma sector have greatly benefited from a surge in exports in Covid-related products such as testing kits and other medical consumables produced here," he noted.

But he added that on the domestic side, despite strong growth in goods consumption and house-building reflecting pent-up demand that had built up in the Spring, certain services activities, particularly in hospitality and the arts and entertainment sectors, remain very weak.

Paschal Donohoe said that a further contraction of the domestic economy is expected in the fourth quarter due to Level 5 restrictions.

He said that numbers on the pandemic unemployment payment rose by around 105,000 to about 350,000 during the fourth quarter, but added that this remains well below the peak of 600,000 seen in May.

"Overall I am optimistic that the economic fall-out from the recent restrictions will not be as severe as in the previous lockdown, as construction, education, childcare and most manufacturing remained open this time," he said.

"Indeed we saw a modest decline in numbers on the pandemic payment this week, the first weekly reduction since early October and I expect significant declines in the weeks ahead," he added.

Today's CSO figures show that industry, excluding construction - grew by 13.2% over the year, which showed the strong performance of pharmaceutical and medical device companies, in particular.

ICT in percentage terms showed an even stronger growth of 33.6%.

But the domestic side of the economy has clearly taken the biggest hit from the pandemic.

Over the year to the end of September, spending on Arts and Entertainment is down 76.2%, while Professional and Administrative services spending is down 16.4%.

Transport, hotels and restaurants are down 11.8%, the CSO said.

Construction, which did recover in the third quarter, is still down on an annual basis by 14.7%, it added.