Ireland's domestic economy was "severely" hit by the coronavirus pandemic in the first half of the year, but strong exports by multinationals have cushioned the fall in growth, according to an economic forecast by the European Commission.

The European Commission's Autumn Economic Forecast said that unemployment has been held at bay by the Government's income support schemes.

But it added that the overall contraction and the fiscal stimulus are expected to "significantly widen" the budget deficit, and future risks to the economy remain "exceptionally high".

As well as the shock to the domestic Irish economy, the pandemic has caused a "collapse" in investment.

Overall, the Commission said the pandemic has caused a "very large shock" for the global and EU economies, with very severe economic and social consequences.

Today's forecast is also based on a "technical assumption" that there will be no deal in the EU UK future relationship negotiations and that from January 1 both sides will be trading on WTO terms.

Due to the pandemic, economic activity suffered a severe shock in the first half of the year but rebounded strongly as lockdown measures were lifted.

"However, the resurgence of the pandemic in recent weeks is resulting in disruptions as national authorities introduce new public health measures to limit its spread," a Commission statement said.

The course of the pandemic means that growth predictions in the coming year will be subject to "an extremely high degree of uncertainty and risks." 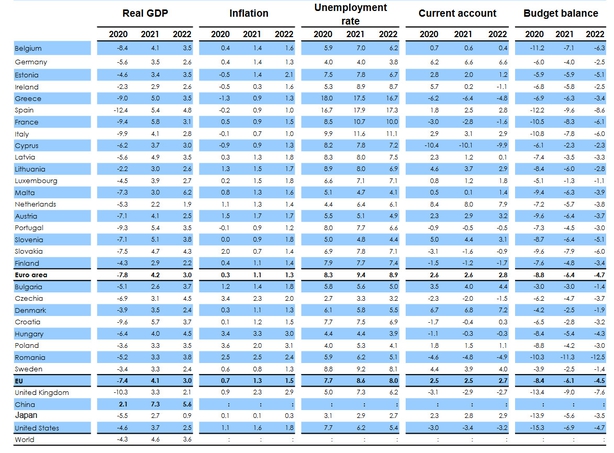 Compared to the Commission's summer outlook, growth projections for both the euro area and the EU are slightly higher for 2020 and lower for 2021.

However, output in both the euro area and the EU is not expected to recover its pre-pandemic level in 2022.

This was a better performance than many other EU member states thanks to the continuing exports of multinationals, especially in the pharmaceutical and business services sectors, today's report says.

The sharp fall in imports and the performance of multinationals has led to a "substantial current account surplus".

However, the domestic economy suffered a greater hit, with consumer demand falling by nearly one fifth in the first half of the year.

"Private consumption compressed dramatically, by one fifth in the second quarter compared to the first, as a stringent lockdown curtailed in-person shopping," the Commission said.

However, household incomes were supported by the Government. During the summer, pent up demand was "to some degree satisfied over the summer when consumers became more optimistic."

The resurgence of the virus in Ireland, and the restoration of restrictive measures, has "slashed prospects for a swifter recovery."

The Commission believes that the extension of income support schemes together with accumulated savings could mean consumption "smoothing" in 2021.

The forecast noted that Irish investment "collapsed" by some 70% in the second quarter.

"Construction faced a temporary ban, aircraft leasing saw a sharp fall in demand, and other projects were delayed or cancelled amid extreme uncertainty," the forecast stated.

The Autumn Forecast has warned that Brexit will reduce trade and GDP growth in particular in 2021. 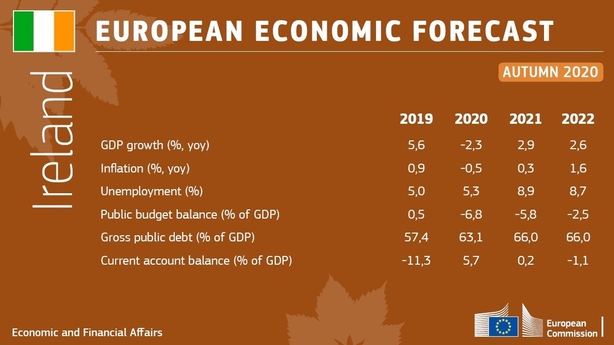 The Commission said the Irish labour market entered 2020 in a "healthy" condition, but by the height of the first lockdown "around one fifth of the workforce could not work and a large share had still not resumed work in October."

"Nonetheless, the wide take-up of Government's income support schemes is set to cushion the labour market shock amid a drop in hours worked," it added.

However, it cautioned that higher unemployment may be a feature of the recovery next year as the Pandemic Unemployment Payment scheme ends in April.

Today's forecast said the budget deficit is projected to reach 6.75% of GDP this year.

"The public support, with an estimated direct budgetary cost of around 5.2% of GDP, played a crucial role in mitigating the economic and social fallout from the pandemic, and led to a deficit in the government balance," the Commission said.

The European Commission said the impact of the pandemic has differed widely across the EU, as will the recovery.

"This reflects the spread of the virus, the stringency of public health measures taken to contain it, the sectoral composition of national economies and the strength of national policy responses," it added.

Although member states and EU initiatives have helped cushion the impact on job losses, unemployment will continue rising in 2021 as capitals phase out emergency support measures and new people enter the labour market.

However, unemployment should improve in 2022, it added.