Marks & Spencer said it will cut a further 7,000 jobs as the Covid-19 crisis deals another blow to Britain's beleaguered retail sector.

"It is clear that there has been a material shift in trade and whilst it is too early to predict with precision where a new post-Covid sales mix will settle, we must act now to reflect this change," M&S said.

Clothing and home trading in its stores remained well below last year though online and home delivery were strong, the retailer said.

M&S has a global workforce of about 78,000, including 2,000 across 17 stores here. A spokesperson said the company's Irish operations will not be affected by today's announced job cuts.

The 136-year old M&S is seeking to reinvent itself after decades of failed attempts. In May it said the crisis would indelibly change its business and that it would accelerate its turnaround plan.

M&S said the crisis had shown it could work more flexibly and productively with more employees multi-tasking and switching between the food and clothing and home divisions. Its use of technology has also increased.

M&S said it expects a significant proportion of its cuts to be through voluntary departures and early retirement. Shopworkers' trade union Usdaw has called for urgent talks.

"These proposals are an important step in becoming a leaner, faster business set up to serve changing customer needs," CEO Steve Rowe said.

The company said it was retaining a cautious approach to planning for the balance of the year.

M&S said its group sales were down 19.2% year on year in the 19 weeks to August 8, which included part of Britain's lockdown period, with clothing and home sales down 49.1% and food sales down 1.1%. 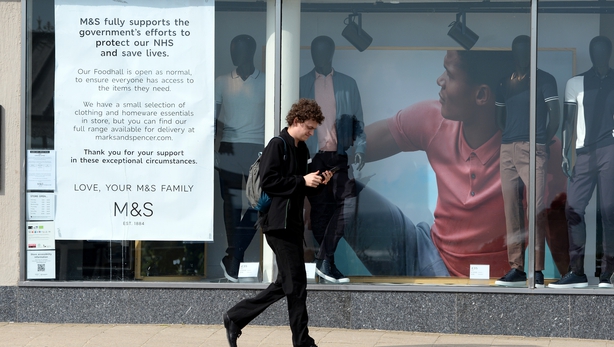 Food stores, which traded throughout the lockdown period, saw sales increase 2.5% in the latest eight weeks.

M&S said it was on track to launch an online food service next month through its partnership with Ocado.

"In May we outlined our plans to learn from the crisis, accelerate our transformation and deliver a stronger, more agile business in a world in which some customer habits were changed forever," chief executive Steve Rowe said.

"Three months on and our Never the Same Again programme is progressing; albeit the outlook is uncertain and we remain cautious," the CEO added.

"As part of our Never The Same Again programme to embed the positive changes in ways of working through the crisis, we are today announcing proposals to further streamline store operations and management structures. These proposals are an important step in becoming a leaner, faster business set up to serve changing customer needs and we are committed to supporting colleagues through this time," he added.