A slump in capital investments, private consumption and exports pushed the German economy into a recession in the first quarter.

Today's detailed data gives a glimpse of the damage caused by the coronavirus pandemic.

The Federal Statistics Office said capital investments fell by 6.9%, private consumption by 3.2% and exports by 3.1% between January and March compared with the last three months of 2019.

This translated into a first-quarter contraction of 2.2%, the steepest rate since 2009.

The data showed that investments in the construction sector, which accounts for almost 10% of overall national output and is Germany's largest employer, rose by 4.1%, contributing 0.4 percentage points to quarterly growth.

State spending was the other bright spot in the otherwise grim data and together with construction it prevented a deeper contraction. Government expenditure rose by 0.2% on the quarter, the data showed.

The 2.2% drop in quarter-on-quarter output was the widest since the financial crisis of a decade ago and the second biggest since German reunification in 1990.

Economists expect a bigger fall in output in the second quarter as the bulk of curbs introduced in the middle of March to fight the outbreak become more apparent.

"As the first quarter performance is the result of 'only' two weeks of lockdown and supply chain disruptions due to lockdown measures in Asia, it does not need much analytical skill to predict a much stronger slump in the second quarter," said Carsten Brzeski, chief euro zone economist at ING.

"Three more weeks of lockdown and a very gradual lifting of some measures do not bode well for the second quarter," he added.

German business morale rebounds in May as corona restrictions are eased

German business morale rebounded in May, recovering from its most dramatic fall on record the previous month as a gradual return to normal activity after weeks of curbs boosts expectations among companies.

The Ifo institute said its May survey showed that its business climate index rose to 79.5 from a downwardly revised 74.2 in April. 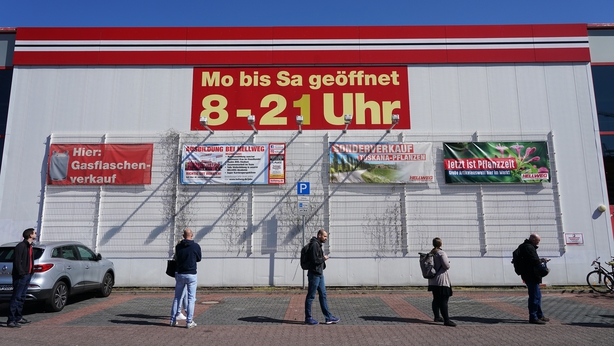 A Reuters poll of economists had pointed to a reading of 78.3.

"The mood at German companies has recovered after the catastrophic previous month," Ifo President Clemens Fuest said in a statement. "The expectations for the coming months have improved significantly."

Lockdown measures introduced in mid-March pushed Europe's largest economy into a recession in the first quarter, when it contracted the most since 2009 and economists expect a bigger fall in output in the second quarter.

"The German economy is again seeing light at the end of the tunnel," he said. "But we are still far away from optimism."

The German economy contracted by 2.2% in the first quarter after a 0.1% contraction in the last three months of 2019 and the government expects national output to shrink by 6.3% this year, its deepest recession since World War Two.

Economists say a recovery to pre-coronavirus levels will come next year at the earliest.

"Reviving economic activity and returning optimism are highly welcome but are definitely no reason for complacency or even hubris," ING economist Carsten Brzeski wrote in a note.

"Even in a more benign scenario, with more gradual lifting of the lockdown measures and no second wave of the virus, the German economy is unlikely to return to its pre-crisis level before 2022," he added.