Adidas has warned of an even deeper hit to second-quarter sales and profits from coronavirus lockdowns after the German sportswear firm reported worse-than-expected first-quarter results and said it had not yet seen a full rebound in China.

Adidas said that 60% of its business was currently at a standstill, with more than 70% of its stores closed worldwide.

E-commerce sales, which last year represented 13% of the total, are growing fast, particularly in China, but are not enough to compensate for the loss of in-store sales.

As shops reopen in China, customers have been returning but they have not been buying as much as before the crisis, chief executive Kasper Rorsted said, adding that he only expects a full recovery there by the end of the second quarter.

"We're not going to see an imminent return to what we had before," he said, declining to comment on what trends it has seen from the 20 stores it reopened in Europe last week.

One bright spot is that the pandemic is increasing interest in fitness and health, Rorsted said, noting record sales of yoga mats as people exercise at home.

Adidas was forced to suspend dividend payments as a condition for a government-backed loan earlier this month to get it through the crisis as it burns cash.

It said it would replace that loan with other financial vehicles as soon as possible.

The company has partially cancelled orders with suppliers for the second and third quarter after inventories jumped by more than a third in the first quarter to €4.334 billion.

It plans to repurpose some of that unsold stock into products to be sold in 2021 and sell the rest at a discount through partners and its own website and outlet stores.

First-quarter operating profit fell to €65m, well short of the €263m expected by analysts, while sales dropped 19% to €4.75 billion compared to a forecast of €4.85 billion by analysts, Refinitiv Eikon data showed. 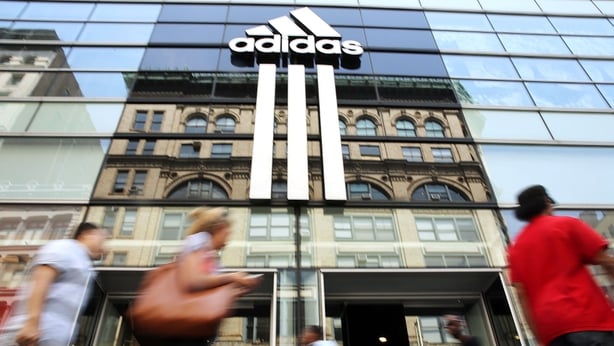 Adidas shares have fallen by more than a third since the coronavirus pandemic started.

Analysts at Jefferies said sales were better than feared in Europe and North America - down 8% and up 1% respectively - with the company reporting revenue growth of 8% outside Asia in January and February before the crisis hit elsewhere.

Adidas said it had taken a hit of around €250m on unsold stock it took back from retailers in greater China, purchase order cancellations and higher bad debt provisions.

It declined to provide an outlook for the year given the uncertainty over when stores might reopen. Rorsted said he expected those in North America to start reopening in mid-May.

Adidas saw e-commerce sales jump 35% in the first quarter, accelerating to 55% in March.

In China, online sales have more than doubled in the first weeks of April, Rorsted said, predicting e-commerce will exceed a target for €4 billion in 2020 from €3 billion in 2019.

Adidas said its cash position had deteriorated by more than €1.4 billion in the first quarter, underlining why it had taken a €2.4 billion government-backed loan on April 14.

The company also said it would push back the presentation of a new five-year strategic plan to next March from November.