The Governor of the Central Bank has warned there is potential for a negative shock to the growth of the international economy in the short-term from the coronavirus.

But Mr Makhlouf also said it was premature to reach any conclusions about the possible impact at this point.

"Any impact on the Irish economy would be felt through both direct and indirect channels," he told attendees.

This included a decline in demand for Irish exports to China, to the negative impact on overall world demand and a consequential impact on Irish exports.

"As China accounts for a large and growing share of world output we would expect a disruption to China's economy to have an impact on Ireland," he stated.

Mr Makhlouf also warned that the future trading relationship between the UK and EU also poses a potential risk to the Irish economy.

He said the UK's withdrawal from the Single Market represents a substantive change for the Irish economy, reflecting the historical interconnectedness between Ireland and the UK.

Mr Makhlouf said the economic impact of the new trading arrangements will depend on how close or how far they are from current arrangements.

"But it seems likely and unsurprising that any future economic relationship between the EU and the UK will have more hurdles than the status quo," he said.

"Consumers, businesses and regulators should expect, and plan for, more frictions and divergence," he stated.

He added that there are no straightforward answers about how much divergence businesses can tolerate or manage.

We are delighted to have @centralbank_ie Governor Gabriel Makhlouf speak at #EFF20 pic.twitter.com/FzJMpsQV8O

"But minimising that uncertainty by using the transition period to plan for change would be my advice to all businesses, all consumers and all regulators," he said.

"That advice also applies to all financial services firms," he added.

Mr Makhlouf also said we must be aware of the potential risks that may arise from non-bank finance and the new payments landscape.

"As regulators, we must continue to deepen our understanding of the risks in the very large non-bank sector domiciled here in Ireland," he said.

"It's a Central Bank priority: we need to lead and take action where necessary," he added. 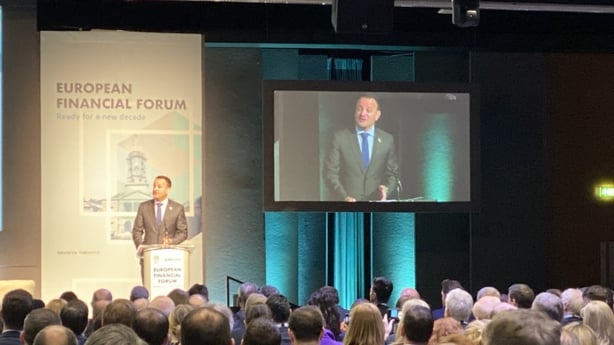 The Taoiseach has said the political centre in Ireland has been shaken, it is diminished but it has held.

Addressing the European Financial Forum in Dublin Castle, Leo Varadkar said it still represents the views of the majority of people and the majority of representatives in our new parliament.

He said the general election had transformed the political landscape here.

Mr Varadkar said Saturday was a day of reckoning for all political parties and now in the days and weeks ahead there is an obligation on all of us to show we can provide leadership, political stability and economic security and work together to build a better future for all our people.

The European Financial Forum, now in its fifth year, has established itself as a key flagship event for the financial services industry in Europe and globally.

It connects industry leaders from the main financial centres around the world.

The theme of this year's forum is 'Ready for a new decade'.