Bettel lashed out right after talks with Boris Johnson, saying his British counterpart had failed to propose serious alternatives to unlock a Brexit deal before the October 31 divorce date and seeking to blame the bloc for the "nightmare".

Bettel was standing alone at a podium that had been prepared for comments by both leaders, but Johnson left immediately after the meeting amid a loud anti-Brexit protest just outside Bettel's office.

The pound had fallen to a three-year low below $1.20 earlier this month, then soared by over 4% for a few days after lawmakers voted to stop Johnson taking Britain out of the EU at next month's deadline even if a transition deal is not clinched.

Johnson and his ministers had been talking up progress in negotiations with Brussels, but the EU side has sounded less optimistic, putting the onus on Britain to come up with new, concrete ideas.

But Monday's comments provided further indication from the EU side that no solution was in sight despite meetings between Johnson and European Commission chief Jean-Claude Juncker and later Bettel. 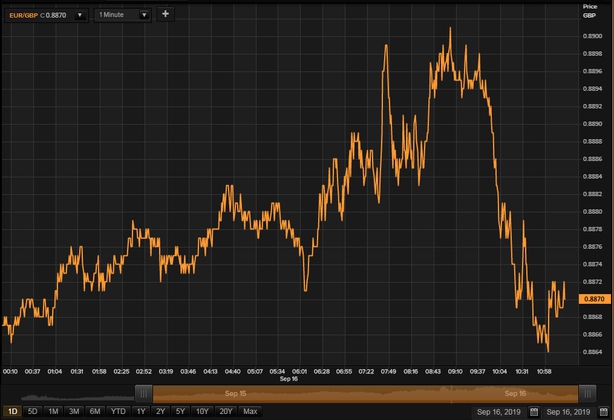 Futures data shows investors have resumed shorting the pound after a brief pause.