Marks & Spencer shares fell today on expectations the 135-year old retailer will be relegated from London's FTSE 100 blue-chip stock market for the first time and a "sell" rating from Goldman Sachs.

Removal from the blue chip index in its quarterly review would be another blow for Archie Norman.

He became M&S chairman two years ago to work alongside Steve Rowe, who was named CEO in 2016 and has been with the company for three decades.

Losing FTSE 100 membership would mean M&S shares could no longer be held by investment funds that only track the index of Britain's top companies, forcing them to dump the stock.

But they have lost about 40% of their value since January 2018 as the British high street stalwart has struggled with competition in clothing and food, particularly online.

Goldman Sachs reinstated its coverage of the stock with a 'sell' rating on M&S, which embarked on a major turnaround plan as fast-fashion chains such as Zara and H&M that have eroded profit in its clothing business.

The FTSE 100 review will be based on closing prices tomorrow, with the results announced after the end of trading on Wednesday and going into effect on September 23.

Valued at £3.76 billion, M&S is ranked 112th in the FTSE 350 of large and mid-cap companies based on Friday's market capitalisation, a position which would mean automatic eviction from the FTSE 100. 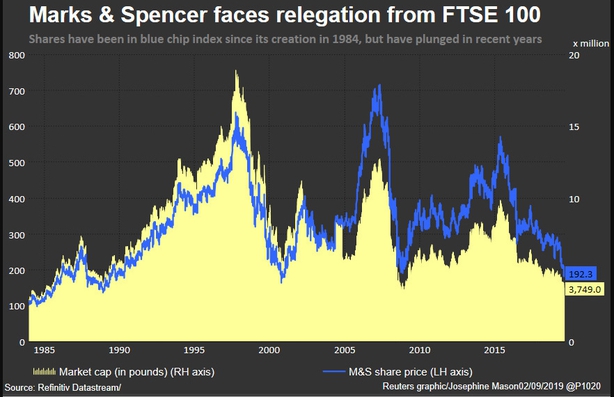 In order to avoid constant changes to the index as a result of day-to-day price volatility, companies are only demoted when they drop below 110 in the ranking.

Centrica and Direct Line could also be relegated, while Polymetal, Hikma and Meggitt could get promoted based on valuations on Friday.

But the ousting of a British household name has caught investors' attention.

M&S is only one of just 28 original members still in the FTSE and one of only 16 with the same name, highlighting how hard it is to stay at the top for long, A&J Bell investment director Russ Mould said.

"In a way a spell out of the spotlight may well do it some good and based on the performance of previous companies that have fallen out of the UK benchmark it hasn't been too long before they have returned," said Michael Hewson, chief market analyst at CMC Markets UK.

The shares trade at a hefty discount to their retail peers and the broader stock market.