Uganda Airlines has taken to the skies once more after almost two decades out of action, but flies into a crowded aviation market in Africa where carriers have the weakest finances and emptiest planes of any region in the world.

The state carrier launched commercial flights on Wednesday, its first since it was liquidated in 2001, aiming to take a slice of the East African aviation business that is dominated by Ethiopian Airlines, the continent's success story.

Uganda is the latest African government to pour money into national flag carriers; Tanzania and Senegal are also resurrecting their airlines, while the likes of Rwanda, Ivory Coast and Togo are expanding theirs.

But such efforts have been hampered by high business costs as well as protectionism, which has impeded a continental open-skies agreement - something industry experts say is vital for the success of African carriers in a tough market.

The African market is forecast to grow almost 5% a year over the next two decades in terms of passengers, faster than mature markets, according to the International Air Transport Association. However, this is from a low base and most state-owned flag carriers in the region are losing money.

While the global aviation industry is on track to make a profit of $28 billion, African airlines are projected to make combined losses of $100 million this year, IATA said in June. 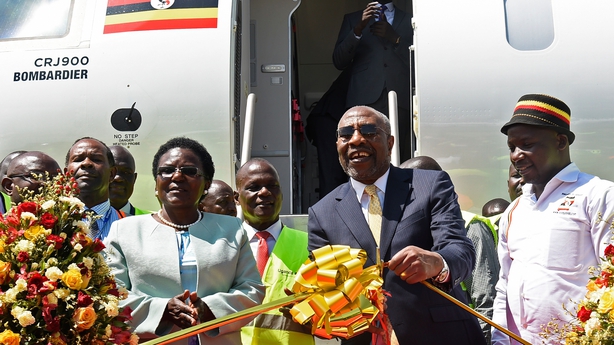 Uganda Airlines, like some of its rivals, aims to attract more domestic travellers to help it buck the gloomy continental trend. Around 2 million passengers per year travel through Entebbe, Uganda's main airport. Around 70% are Ugandans, said the carrier's CEO Ephraim Bagenda.

"All those currently travel on foreign airlines," he told Reuters. "We want part of that cake."

Last year, it looked like Africa was making progress on an open-skies agreement - the Single African Air Transport Market - to let airlines decide how frequently they fly between cities and which aircraft they use.

A total of 28 countries have signed up, accounting for 75-80% of African air traffic. Uganda is considering signing, Works and Transport Minister Monica Azuba Ntege said.

However, so far only 10 signatories - including Cape Verde, Ghana, Togo, Ethiopia and Nigeria - have begun changing their own laws to implement the deal and open up their markets, said Raphael Kuuchi, Vice President for Africa at IATA.

The patchy efforts undermine the agreement and hobble direct connections within Africa, say analysts. Some airlines, including from countries that have signed up, oppose the open-skies deal because they fear bigger competitors.

"The most subsidised airlines and the biggest ones are going to take the biggest market share because they (are) able to afford it," Kenya Airways CEO Sebastian Mikosz told an investor briefing on Tuesday. "They are going to kill the smaller national airlines which are just starting because they will have no way to defend themselves."

Ethiopian Airlines, sub-Saharan Africa's only successful large state-owned airline, has bucked the regional trend and has been expanding fast, thanks in part to having secured key traffic rights in two ways.

First, it signed bilateral agreements with nearly all African countries in the 1970s, activating them as needed, said Kuuchi. The airline flew to parts of the continent served by few other carriers and leveraged that goodwill to open up markets.

"Governments were willing to give them additional rights, and travel rights, once you give them out, it's very difficult to retract," he added.

More recently, Ethiopian has been helping other countries launch their own carriers and taking a stake. That has created regional continental hubs in Togo, Malawi and Chad where it can pick up and feed traffic into its main hub in Addis Ababa, cementing its dominance and rivalling Gulf carriers.

Now governments are hoarding travel rights to protect their own airlines, so African carriers are struggling to set up hubs vital to winning international travellers, said Girma Wake, former CEO of Ethiopian Airlines.

"Instead of flying point-to-point everywhere, if they can collect traffic from the low-traffic areas and bring them to major hubs and carry them from those major hubs, you will be in a better position," he told Reuters.