Topshop owner Philip Green plans to close six stores in Ireland, and 17 in the UK, putting 520 jobs under threat, as part of a plan to rescue his Arcadia business.

Some Topshop, Topman, and Miss Selfridge shops in Dublin and Galway are earmarked for closure. Some Dorothy Perkins, Evans and Wallis stores in Cork and Dublin are also set to close.

The retail group's proposals will also see rent cut at another 194 outlets across the UK.

In a statement the company said: "No UK or Irish trading locations will close in the short term, and employees and suppliers will continue to be paid on time and in full."

It added: "The Group is committed to keeping redundancy levels to a minimum. The locations which have been identified for potential closure employ 520 people.

"Every effort will be made to redeploy affected colleagues within the business where possible, and any staff unable to be assigned a position elsewhere in the Group will be eligible for applicable redundancy payments."

All of the Arcadia stores in the UK and Ireland will "continue to trade as normal" ahead of Arcadia's crunch meeting with creditors on 5 June as it seeks approval for the closure plan.

Chief executive of Arcadia Group, Ian Grabiner, said the steps were "tough but necessary" to mend the business.

The company also plans to shut all its 11 Topshop and Topman stores in the US. 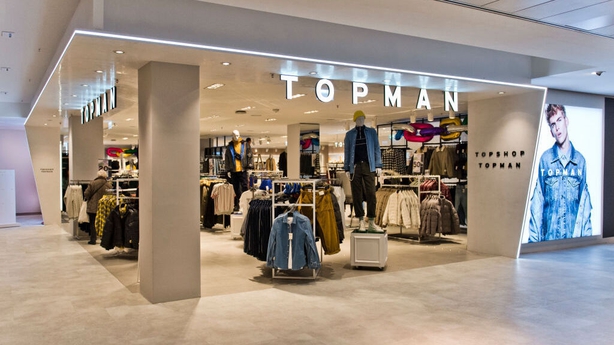 The Arcadia Group has been struggling in a challenging market with online competition.

The reorganisation comes in the form of a series of Company Voluntary Arrangements (CVAs), a type of insolvency for troubled businesses that allows rents to be cut.

The move is seen as a final effort by the company to stave off administration or breakup.

The full list of proposed closures in Ireland is: