Former Nissan chairman Carlos Ghosn emerged from his Tokyo detention centre today after accepting bail of $4.5m under strict conditions including restrictions on seeing his wife.

The 65-year-old tycoon faces four charges of financial misconduct ranging from concealing part of his salary from shareholders to syphoning off Nissan funds for his personal use.

His case has captivated Japan and the business community with its multiple twists and turns, as well as shone a spotlight on the Japanese justice system which critics say is overly harsh.

Ghosn exited the Kosuge Detention Centre in northern Tokyo today after spending 21 days answering questions from authorities over allegations he creamed off $5m in Nissan funds for personal ends.

Unlike his previous departure when he was dressed in a Japanese workman's outfit with cap and facemask, Ghosn this time strode confidently out dressed in a dark suit without tie.

Under the conditions of his bail, Ghosn must stay in Japan and must live in a court-appointed residence with cameras to monitor his movements amid fears he might try to destroy evidence.

His lead defence lawyer Junichiro Hironaka said the conditions also included an "approval system" to see his wife Carole, whom prosecutors believe has made contact with people involved in the case.

"If the court approves it, she will be able to meet him," he said.

Ghosn denies all the charges, with a spokesperson for the executive saying this week he would "vigorously defend himself against these baseless accusations and fully expects to be vindicated".

The spokesperson said Ghosn was being detained "under cruel and unjust conditions, in violation of his human rights, in an effort by prosecutors to coerce a confession from him". 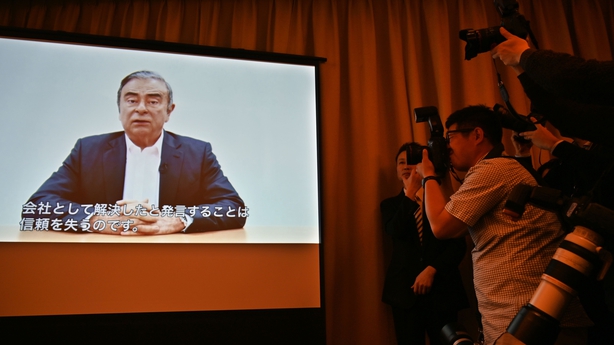 On Monday, he was hit with what experts have described as the most serious charges yet as prosecutors accused him of syphoning off $5m of Nissan cash transferred from the company to a dealership in Oman.

He also faces two charges of deferring some $80m of his salary and hiding this in official documents to shareholders, and seeking to shift personal investment losses to the firm during the 2008 financial crisis.

A Nissan spokesman said in a statement that the company's "internal investigation has uncovered substantial evidence of blatantly unethical conduct".

This was the second time Ghosn has been granted bail after posting $9m in March to win his freedom.

Ghosn was preparing to hold a much-anticipated news conference to "tell the truth" about his case but he was re-arrested shortly beforehand to face questioning about the alleged $5 million embezzlement.

Clearly aware he was about to return to custody, Ghosn pre-recorded a video in which he accused "backstabbing" Nissan executives of a "plot" against him, as they feared closer ties with French partner Renault.

Unless re-arrested over further allegations, Ghosn will be free to organise his defence ahead of a possible trial that is likely to take months to prepare.

His lawyers have demanded he be tried separately from Nissan, which also faces charges for submitting the suspect financial documents, and have voiced fears he will not receive a fair trial.

The dramatic case has thrown international attention onto the Japanese justice system, derided by critics as "hostage justice" as it allows prolonged detention and relies heavily on suspects' confessions.

Deputy prosecutor Shin Kukimoto at the Tokyo District Public Prosecutors Office told AFP it was "extremely regrettable that (the court) approved his bail even as it recognised that the accused had planned to work with people related to the case".

The court has also "recognised there was a fear over destroying evidence of the crime", Kukimoto added.