Sacked Nissan chairman Carols Ghosn has declared his innocence in his first public appearance since his arrest in November.

He told a Tokyo court today that he was wrongly accused of financial misconduct.

"I have been wrongly accused and unfairly detained based on meritless and unsubstantiated accusations," Ghosn told the Tokyo District Court.

Journalists and television crews thronged outside the court as Ghosn - credited with rescuing Nissan from near-bankruptcy two decades ago - entered in handcuffs and a rope around his waist, led in by two guards.

The hearing received top billing on Japanese TV news updates and 1,122 people had lined up for 14 court seats assigned by lottery, highlighting the interest in the case of the once-feted executive.

The court hearing, requested by Ghosn's lawyers, was held to explain the reasons for his prolonged detention since his November 19 arrest rather than to argue merits of the case.

Presiding Judge Yuichi Tada said the detention was due to flight risk and the possibility that he could conceal evidence.

Ghosn used the opportunity to deny accusations against him, a move that defence lawyer Masashi Akita said could prove risky if prosecutors use it to build their case.

The 64-year-old executive has been formally charged with under-reporting his income. 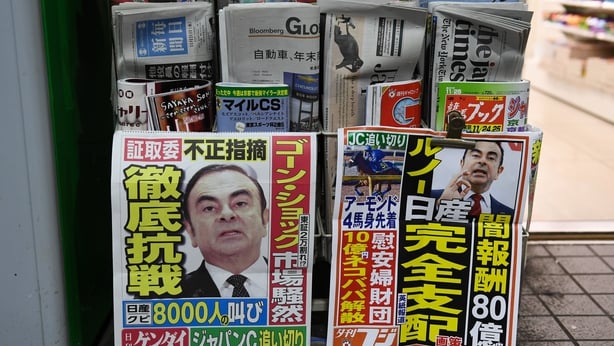 He has also been arrested, but not yet indicted, on allegations of aggravated breach of trust in shifting personal investment losses worth 1.85 billion yen ($17m) to the carmaker.

"I believe strongly that in all of my efforts on behalf of the company, I have acted honourably, legally, and with the knowledge and approval of the appropriate executives inside the company," Ghosn said.

Regarding allegations that he transferred losses to Nissan, Ghosn said he had asked the company to temporarily take on collateral for his foreign exchange contracts.

He said he did this to avoid the only other choice he had, which was to resign and use his retirement allowance for collateral.

"My moral commitment to Nissan would not allow me to stepdown during that crucial time," Ghosn said. "A captain doesn't jump ship in the middle of a storm."

Ghosn said the contracts were transferred back to him and that Nissan did not incur any loss.

Ghosn is also accused of making $14.7m in payments to Saudi businessman Khaled Al-Juffali using Nissan funds in exchange for arranging a letter of credit to help with his investment losses.

Ghosn said that Juffali's company was compensated for "critical services that substantially benefited Nissan", including soliciting financing and resolving a business dispute.

The Khaled Juffali Company also issued a statement today saying it had received the payments for legitimate business purposes.

Nissan, which has ousted Ghosn as chairman, reiterated that its internal investigation prompted by a whistleblower had uncovered "substantial and convincing evidence of misconduct" and that its investigation was ongoing and expanding in scope.

He had been pushing for a deeper tie-up between the pair, including potentially a full merger at the French government's urging, despite strong reservations at Nissan.

His arrest has also put Japan's criminal justice system under international scrutiny and sparked criticism for some of its practices, including keeping suspects in detention for long periods and prohibiting defence lawyers from being present during interrogations that can last eight hours a day.

Ghosn has been held at the Tokyo Detention Centre, a spartan facility where small rooms have a toilet in the corner and no heater - a far cry from the jet-setting lifestyle Ghosn was accustomed to.

Under Japanese law, suspects can be detained without charges for up to 23 days, and then re-arrested on separate allegations.

On December 31, the Tokyo District Court granted prosecutors'request to extend Ghosn's detention by 10 days until January 11.

He is expected to remain in detention through his trial.

It is unclear if he will be granted bail, which is historically rare for suspects who insist on their innocence, although it is becoming more common.

Nissan's Representative Director Greg Kelly, who was also arrested on November 19 and has been charged with conspiring to under-report Ghosn's income, was released on December 25 after posting bail of 70 million yen, or about $640,000, in cash.