The British Comptroller and Auditor General has published a new report on the preparedness of UK government agencies for Brexit, and one thing is abundantly clear – they are not ready.

They will not be ready by 29 March. In fact they think it will take three years to be ready in full to "take back control" of the UK border.

That’s three years from the day it becomes apparent which type of Brexit they are getting.

Except for the Northern Ireland/Ireland border, which cannot be controlled in the conventional sense.

It tells us the Border Delivery Group – the high-level body set up to drive the creation of the UK/EU border – "only began its detailed planning work in relation to Northern Ireland in July 2018".

This is because of "the ongoing sensitivity of negotiations".

There is a lot in this report, but let's skip straight to the pay-off line, the Comptroller's assessment of the contingency planning that is being put in place for a no-deal Brexit starting on 29 March, in the full knowledge that they will not be able to control the UK border:

The government is putting in place coping responses where it can. How effective they will be remains to be seen.

In short, this document presents one of the strongest arguments against a no-deal Brexit yet made by a UK government organisation, and its strength is that it doesn’t present any recommendations – just findings of fact. 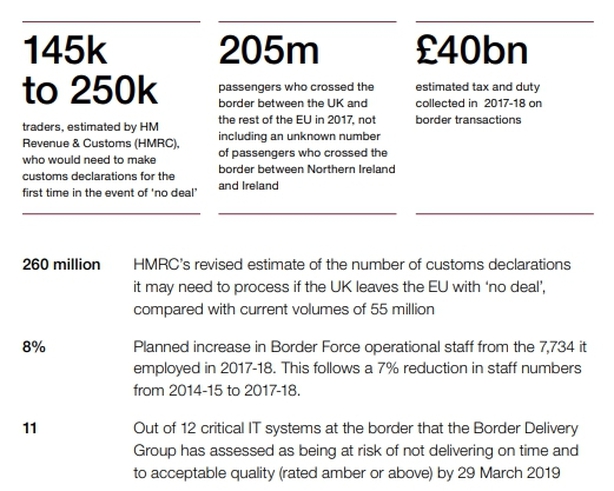 For example, the audit review of 20 "high-impact border-related EU exit work streams" and visits to key ports found the border management agencies can’t check all the food, plant and animal imports coming into the UK from the EU – there aren’t enough customs officers, there aren’t enough truck parking places, there are no storage sheds (particularly refrigerated ones) or computer systems to allow this to happen.

So they are just not going to bother. Instead they will - correctly - concentrate the available resources on security and safety issues and the flow of traffic.

They will get around to compliance as and when they can, hoping in the meantime that people are honest enough to pay up what they owe to customs and revenue (currently about £40 billion a year, most of that in VAT).

In the event of ‘day one of no deal’ (i.e. a no deal Brexit on March 29th) the government has accepted that the border will be ‘less than optimal’. The government does not have enough time to put in place all of the infrastructure, systems and people required for fully effective border operations on day one. It has decided to prioritise security and flow of traffic over compliance activity in the short term. Initially, Defra intends not to apply regulatory or safety checks on the majority of agricultural and food-related products and other goods arriving from the EU. This is because its planning assumption is that risks at the border will not change immediately, and that overall patterns and volumes of border crossings will initially remain the same. HMRC expects that most traders will be compliant and declare the duties that they owe as now. The government has not defined what ‘less than optimal’ might mean but this could include delays for goods crossing the border, increased opportunities for tax and regulatory non-compliance and less information to inform checks of people crossing the border.

Although they are counting on the vast majority of people being honest about their customs and VAT obligations, the National Audit Office is realistic and understands that the longer the situation goes on, the more opportunities will open for organised crime and terrorist groups to exploit.

The Brexit outrage headlines of the week in the UK this week have been about government contingency planning to keep the flow of food and medicines going in the event of a no-deal Brexit.

These have included the possible chartering of ships by the UK government to bring in emergency supplies.

To manage potential disruption at the border after 29 March 2019, government departments have begun civil contingency planning. In the event that member states apply third country controls to imports from the UK, there will be a significant impact on the flow of traffic crossing the border. The BDG is working with departments and the Cabinet Office’s Civil Contingencies Secretariat to put civil contingency plans in place. Plans are progressing to cope with issues such as queues of traffic in Kent, and to enable the continued supplies of essential goods and medicines.

The current plan is that if the British government thinks things are getting really bad with Brussels over the next few weeks, then it will order a step-up in contingency planning, starting after Christmas.

The traffic queues in Kent is a reference to "Project Brock".

This is a traffic management plan to cope with the backlog of trucks expected at Dover, if EU states operate customs controls from 30 March on goods coming from the UK.

Project Brock is described as "an interim solution specifically for EU exit that aims to hold up to 1,900 coast-bound lorries on the M20 motorway while allowing non-port traffic to continue to move in both directions.

"The Department for Transport plans to take the decision to implement Project Brock at the end of February 2019. It will take between two and three weeks to put in place the contraflow infrastructure and then can be switched on within a few hours".

However messy and painful this will be, a contraflow system on a busy road is the easy bit.

The really hard stuff is the computer systems required to "take back control" of the border.

The British government needs twelve pieces of key IT infrastructure – only one of them will be ready on time.

And there is a network effect here – each part of the computer system is reliant on the other parts, so none of it will work properly unless all of it works.

That's a big ask for any single high volume, built from scratch IT project. Multiply that problem by twelve and add an immutable hard deadline...

The audit office has used a traffic-light system to indicate the state of readiness of the twelve projects.

None are Green for Go. One is Amber-Green – meaning likely (a trade remedy system for dealing with certain tariffs).

One is Amber (an automated licence verification system, for linking customs databases). Eight are classed as Amber-Red, meaning "successful delivery in doubt".

Two more are classed Red – meaning "unachievable".  These are the two that are of most interest to Ireland – transit arrangements for the "landbridge", and Northern Ireland.

While the situation regarding the North has been well reported, the issues of goods in transit has been less well covered, though this is of huge significance of Irish companies and hauliers moving goods to and from mainland Europe.

The report states: "HMRC is unsure whether it can deliver the full capability and infrastructure for the Common Transit Convention (CTC) project by March 2019. Discussions to accede to the CTC are ongoing. Work on the National Transit (NT) system has been stopped to enable resources to be focused on delivering the requirements for accession to the CTC, which puts both the CTC and NT at risk". 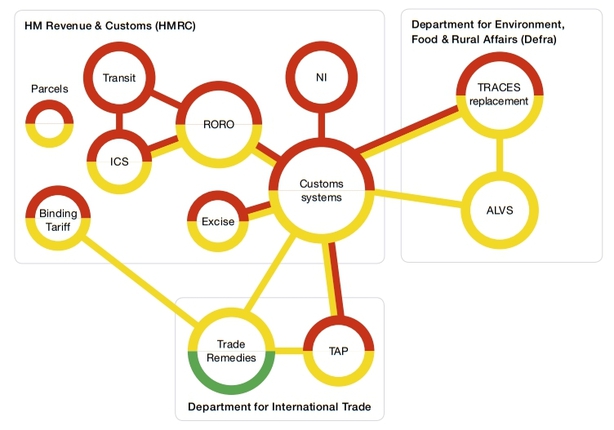 The report identified Northern Ireland as one of two particularly important challenges in the context of border management.  In particular "ensuring any arrangement respects the Belfast Agreement and meets UK commitments to avoid a hard border, and implements arrangements set out in the Withdrawal Agreement; and ensuring ‘just in time’ supply chains are not disrupted through delays at ‘roll-on, roll-off’ (RORO) ports in the event of ‘no deal’.

The government has not yet taken a policy decision regarding whether and how to implement customs arrangements at the Northern Ireland and Ireland land border in the event of ‘no deal’. The government’s current planning assumptions would aim to take into account different types of business, consider the feasibility of new systems, and ensure the facilitation of cross border movements. HMRC also needs to design and implement a system that will allow RORO ferry ports and Eurotunnel to operate smoothly. The government has not yet determined how this will happen but currently plans on requiring customs declarations to be made in advance of arrival at RORO locations. This represents a major business change for traders and hauliers. Systems also need to be implemented to allow HMRC to match a customs declaration to the movement of goods for compliance purposes. Discussions regarding how this will operate in practice are still ongoing with ports and representatives of the businesses who will need to operate the system.

The report also admits the cost to the businesses that operates parts and airports will be considerable, and that the point at which work should have begun to have them in place for 29 March has already passed.

The failure of the talks on the separation agreement with Brussels to make timely progress has meant firms are not in a position to plan for the type of facilities they will need, nor seek the financing to hire contractors to build them.

And then there are the problems of the Customs and immigration staff (or Border Force, as they are now called in the UK).

Over the same period, demands on Border Force have risen because of increases in the flow of people (17%) and goods (15%) coming across the border into the UK".

The Border Force is well behind in its recruitment and training plans – though in fairness it is difficult in the extreme to plan for an outcome that has not been determined by the political process.

Ultimately this document adds up to a plea to avoid a no-deal Brexit, with all the disruption that entails.