You may not realise it, but your everyday behaviour could be hurting your financial health.

From choosing your morning coffee to picking a mortgage provider, your brain makes decisions by juggling countless factors - of which the financial impact is just one.

"We think we’re better decision-makers than we are," says Dr Pete Lunn, senior research officer at the ESRI and principle investigator of its PRICE (Programme of Research Investigating Consumer Evaluation) Lab.

He specialises in Behavioural Economics, a relatively new field of study that takes as much from anthropology and philosophy as it does traditional economics.

And unlike a lot of traditional economics it recognises that humans are not machine-like in their behaviour - and do not necessarily make what would, on paper, be the most logical or rational decision.

Your hardwiring, your past experiences and even your immediate surroundings can also play a part - while there are always plenty of other external forces actively trying to nudge you to spend more than you might need to.

One of the recurring financial themes of Behavioural Economics is that, to our brains, not all euros are equal.

People tend to split the money they have into different categories - known as Mental Accounting - and are more careful with some than they are with others.

That helps explain why we might cautiously manage the money allocated to the week’s shopping, but thoughtlessly burn through a similar amount during a night out.

It is also the reason why a generally frugal person might treat unexpected income carelessly - even if it is their own money back in the form of a tax return.

This unequal treatment of our money extends to everyday transactions, too.

Consumers will generally feel aggrieved at parting with their cash - known as the Pain of Payment - but that pain appears to be reduced when using a card.

That pain of payment also makes us bristle when handing over a lump sum of money - be it for car insurance, gym membership or a mobile phone.

Paying in monthly installments may seem like the more attractive alternative in that case, but that can cost much more over time.

According to Dr Lunn, the solution is relatively simple - do the maths.

"It really is worth adding up and realising what you’re going to spend," he said. "You might be charged up to 50% extra for not wanting to pay it all upfront."

Of course there are logical reasons for avoiding a lump sum payment - for example not having that amount of cash on hand. However in some cases it may still be cheaper to borrow the money - even on a credit card - than to pay an inflated monthly fee for the foreseeable future. 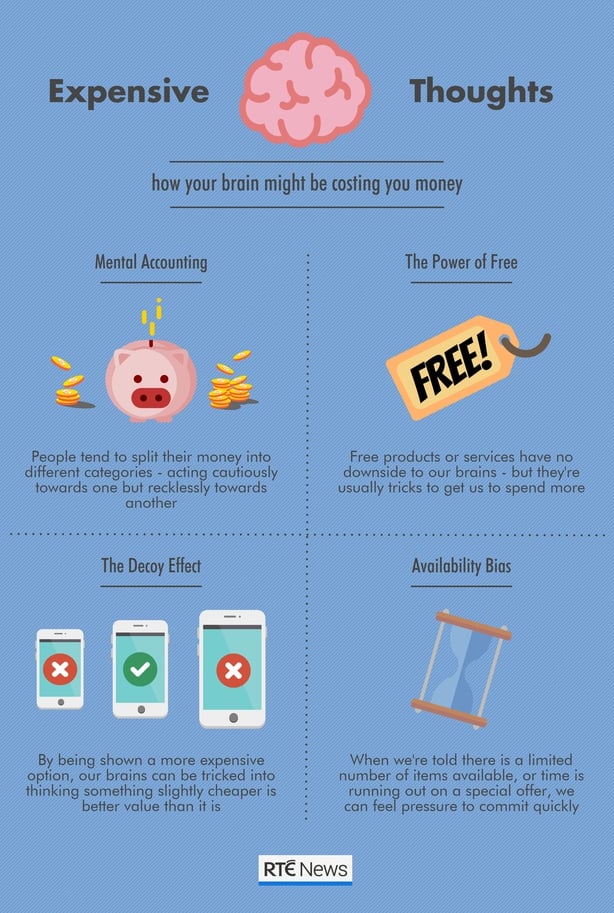 As irrational as our brains can be, we should give them some slack. After all, they are under constant bombardment from designers, marketers and sales people looking to leverage those primal impulses into revenue.

For example; when a supermarket offers a product ‘Buy two get a third free’, they are using the Power of Free to encourage sales.

In his book Predictably Irrational, Dan Ariely theorises that a "free" item is so attractive to us because it appears to carry no risk.

But that appeal may blind us to the fact that we’re spending more overall - for example by making the unplanned purchase of a second item in order to access the third one for "free".

Retailers may also put their products in a context that will encourage you to spend more money.

For example, placing an item’s Recommended Retail Price next to its (lower) sale price implies to us that the item is good value - even if that’s not the case. This is known as Irrational Value Assessment.

Sales people may also use Proportional Coding to encourage shoppers towards a slightly more expensive item than they had in mind. After all, if you are already planning to spend €800 on that new TV, what’s another €50 for that marginally newer model?

(This applies to small purchases too - for example fast food restaurants enticing you to ‘go large’ for an extra few cent).

Sometimes shops will even show you a more expensive item, knowing you'll never buy it, just to get you to spend more on something else.

"This is known as the Decoy Effect," said Dr Lunn. "On purpose, they show me something I don’t want to buy and can’t afford, but they’re trying to get me to move closer to its price."

Say you’re deciding between two smartphones - Option A costing €200 and Option B costing €300 - you might wonder if the slightly better features of B justify the extra €100... but if that’s put in the context of the €600 Option C, suddenly your €300 spend might not seem so unreasonable. In fact, you may even start to feel like Option B is a bargain.

And then there is the classic attempt to add-on items at the point of purchase - impulse buys like warranty, insurance or accessories.

These attempt to play on Decision Fatigue, where your brain is worn out from the big decision it’s just made and more susceptible to suggestion as a result.

According to Dr Lunn, consumers can save themselves by giving clear thought to what they want before entering the sale environment.

"Know what you’re going to pay and be firm with the person you’re dealing with," he says.

Above all, only buy the items you went shopping for in the first place.

Unsurprisingly these kinds of natural behaviours are encouraged online too - often backed up by powerful algorithms designed to target you personally.

When an online retailer offers ‘Free Shipping when spending more than X’, they too are tapping into the Power of Free to encourage you to add items to your cart.

Old fashioned 'Time Limited Offers' have also gotten a new lease of life online, most notably through hotel booking sites that tell you "there are only X amount of rooms left at this price" (and Y number of people looking at them at the same time as you).

This plays into our Availability Bias, prompting us commit quickly for fear of missing a deal.

That neurological need for certainty is also why Direct Currency Conversion has proven so lucrative for online retailers - as it allows people to lock-in the exchange rate they’re getting at the point of purchase rather than having it potentially catch them by surprise a few days later.

However Dr Lunn says that the rate offered is almost always considerably worse than what you would get from your bank and his research shows consumers spending a lot extra through this technique.

His advice is to pay in the currency the product is sold in and let your bank do the conversion.

"It’s remarkable how seemingly small amounts of money add up to a very large amount of money over time," he says.