US economic growth slowed less than previously estimated in the fourth quarter as the biggest gain in consumer spending in three years partially offset the drag from a surge in imports.

US gross domestic product expanded at a 2.9% annual rate in the final three months of 2017.

This was higher that the previously reported 2.5%, the Commerce Department said in its third GDP estimate for the period today.

That was a slight moderation from the third quarter's brisk 3.2% pace of growth.

Economists polled by Reuters had expected that fourth-quarter GDP growth would be revised up to a 2.7%rate. The economy grew 2.3% in 2017, an acceleration from the 1.5% logged in 2016.

The US government also reported that after-tax corporate profits increased at a 1.7% rate in the fourth quarter after rising at a 5.7% pace in the third quarter.

The government said while provisions of the income tax overhaul that came into effect in January had no effect on corporate profits for current production, they had impacted on net cash flow in the fourth quarter.

An alternate measure of growth, gross domestic income, rose at a 0.9% rate in the three months from October to December. GDI expanded at a 2.4% rate in the third quarter.

The average of GDP and GDI, also referred to as gross domestic output and considered a better measure of economic activity, increased at a 1.9% rate in the fourth quarter. That followed a 2.8% rate of increase in the previous period.

There are signs that economic activity slowed further in the first quarter, with retail sales falling in February for a third month in a row.

US housing data have been generally weak and the trade deficit hit a more than nine-year high in January.

But analysts believe the economy will hit the Trump administration's 3% annual growth target this year, driven by a $1.5 trillion income tax cut package and a planned increase in government spending.

That could keep the door open to slightly more aggressive interest rate increases from the Federal Reserve this year.

The Fed raised rates last week and forecast at least two more hikes for 2018, while it also lifted its economic growth projections for this year and 2019.

Growth in consumer spending, which accounts for more than two-thirds of US  economic activity, was revised up to a 4% rate in the fourth quarter from the 3.8% pace reported last month. 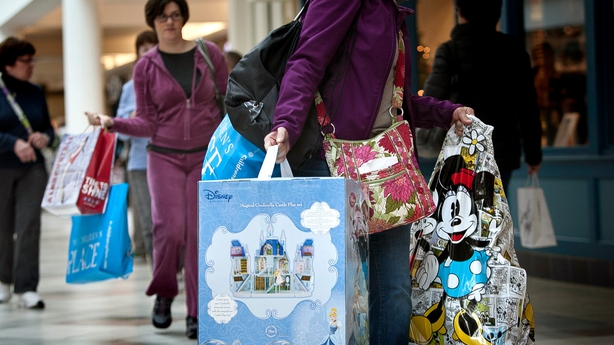 That was the quickest pace since the fourth quarter of 2014 and followed a 2.2% rate of growth in the three months from July to September.

Imports grew at an upwardly revised 14.1% pace instead of the previously reported 14% rate.

That was also the quickest pace since the third quarter of 2010 and overshadowed a rise in exports driven by weakness in the dollar.

Today's figures also showed that growth in business spending on equipment was revised slightly down to an 11.6% rate from the 11.8% pace published last month. That was still the best performance since the third quarter of 2014.

US government spending grew at a 3% rate, revised up from a 2.9% pace. That was the strongest pace since the second quarter of 2015.