Residential property prices grew by 12.5% in the year to January, the highest annual growth rate since early 2015, new figures from the Central Statistics Office show.

The new CSO figures show that residential property prices outside of Dublin rose by 13% in the year to January, with house prices up 13.5% and apartment prices rising by 9.9%.

The West region saw the biggest rate of price growth, with house prices racing ahead by 17.2%, while the South East saw the lowest rate of growth at 9.9%.

Meanwhile, Dublin residential property prices increased by 12.1% in the year to January. House prices in the city rose by 11.4%, while the price of apartments soared by 15%.

A sharp recovery in prices that began in Ireland five years ago showed some signs of stabilising in 2016 before accelerating again last year.

But average prices are still below peak levels seen during the property bubble over a decade ago. 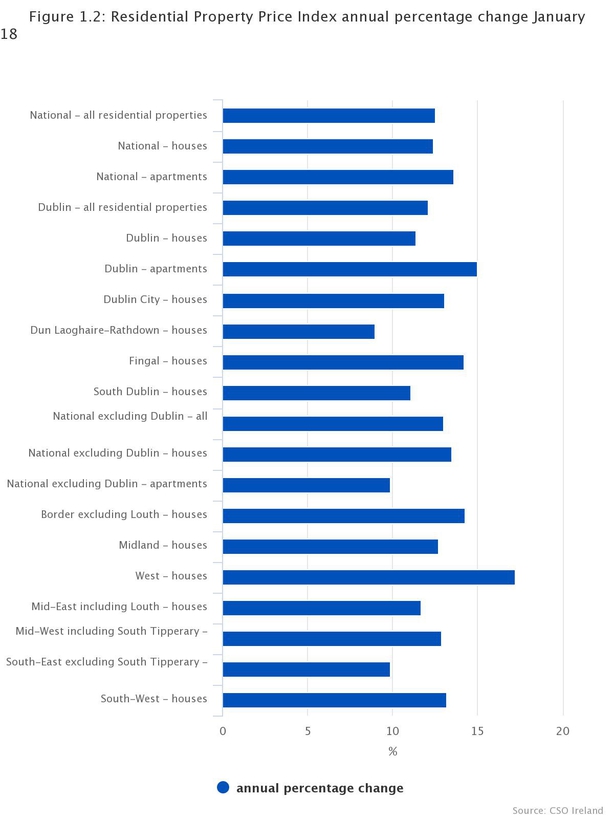 The CSO said that in the 12 months to January, a total of 43,508 household market dwelling purchases were filed with the Revenue Commissioners. 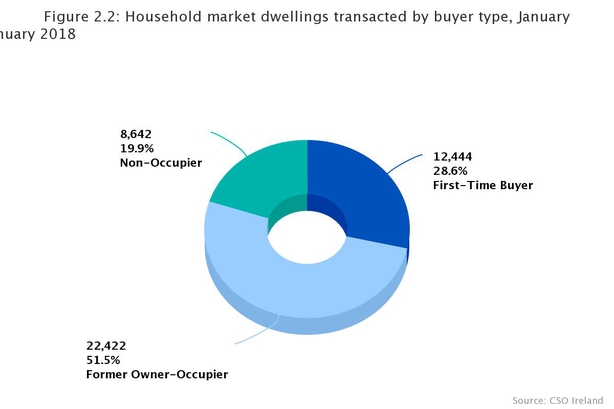 He said the annual rate of increase is now looking like it is set to remain in double-digits for well into 2018 at least.

"The biggest increase this year is likely to come from outside the capital, with the asking price for houses in more expensive areas rising at a slower rate," the economist said.

He said that changes to Central Bank rules mean that in more expensive areas, the trend of increasing house prices will not be as pronounced.

"Previously up to a fifth of mortgages were allowed to exceed a loan-to-income ratio of 3.5. But this is becoming even tighter in 2018 with only 10% of those trading up allowed to breach that rule," Mr McQuaid explained.

"The allocation remains unchanged for first-time buyers. Dublin prices will be out of reach for more borrowers as a result, while in other areas where buyers will not need to borrow as much, prices will see stronger growth," he added.